Before Lockdown 4.0, I Hit The Great Ocean Road To Have Dinner With A Masked Mannequin

The last time I drove a beast of a car like the latest Toyota Hilux was when I owned a much, much older version of the car — a 1986 Toyota 4Runner I affectionately named Big Red — in the exact same colour as the one I recently had the heartbreak of driving down to Cape Otway.

I say ‘heartbreak’ purely because my parents claimed my 4Runner died while I was overseas and was subsequently sold for parts, which, given I wasn’t there in person to confirm this revelation, I have yet to accept as truth. I’ve since contacted my go-to fake lawyers and ‘carslaughter’ is apparently “not something we are willing to discuss, get out of our office Louie this has been three times in one week, a new low for you”. 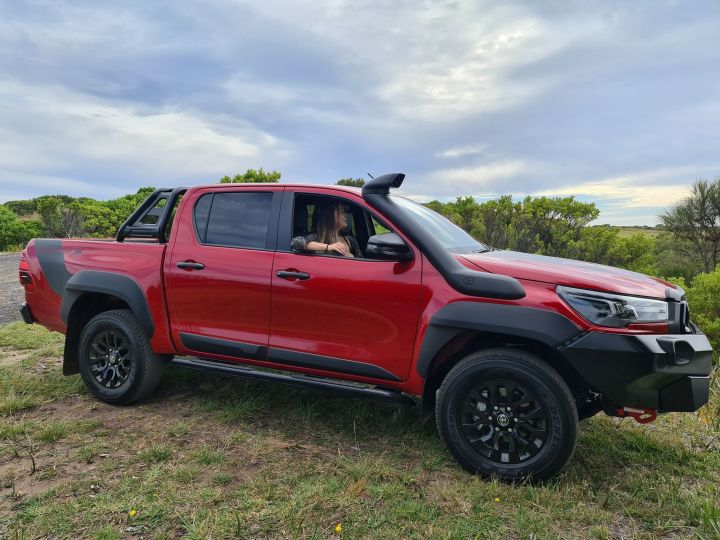 In all honesty though, driving Bigger Big Red (I named it in honour of the fallen) made me realise just how old my beloved car was. This car had cameras. Since when did that happen? My phone only just got a camera?

Before our 400th lockdown, I managed to squeeze in a cruisy adventure out of Mebourne, which in hindsight I’m so glad I did given recent…events. Honestly, if you were contemplating taking a trip to regional Victoria, I’d start planning it now — who knows what’s gonna happen in the upcoming months.

The point of this trip, graciously pulled together by Visit Victoria, was to experience the Great Ocean Road in all its glory, as neither my pal Hana nor myself had truly experienced it since we’ve had the ability to drive. It’s one of those situations where it’s rarely considered a holiday unless you venture to the city and pay $500 for a gold-plated apartment above a casino.

After agreeing to switch driving responsibilities whenever the driver got pissed off at the music the passenger was playing, we set off for Cape Otway, a cruisy 28km banger-filled (from my AUX cord) drive from Apollo Bay.

For the first stop, we found ourselves at IPSOS Restaurant & Bar, a traditional Greek restaurant that delivered the goods. And by goods, I mean food that I’ve always been too intimidated to order and a bloody delightful owner named Dominic.

For our ‘your music’s shit,’ ‘no your music’s shit’ discussion over a professional lunch, we copped delicacies ranging from Greek beer (one pint, we’re both driving and we’re responsible as fuck), the most outstanding fried eggplant, dips, olive dips, beetroot dips (a tonne of tips) and fresh fish — honestly, I felt embarrassed for eating two-minute noodles nine hours earlier. My tongue didn’t deserve it and hasn’t for a long time. 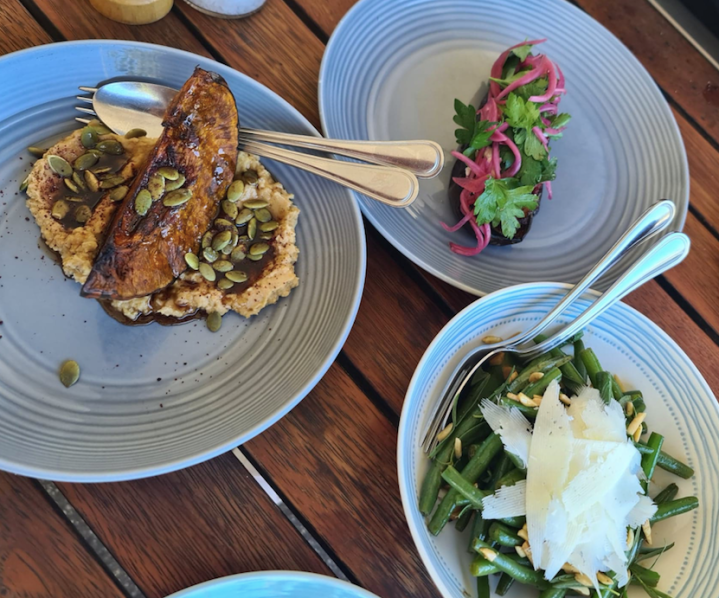 After a quick, intentional detour that definitely wasn’t the result of us not being able to figure out a very simple GPS system, we finally arrived at Teddy’s Lookout, which is designed to show you a sweeping view of the Great Ocean Road but I spent the entire time staring at the star of the show: 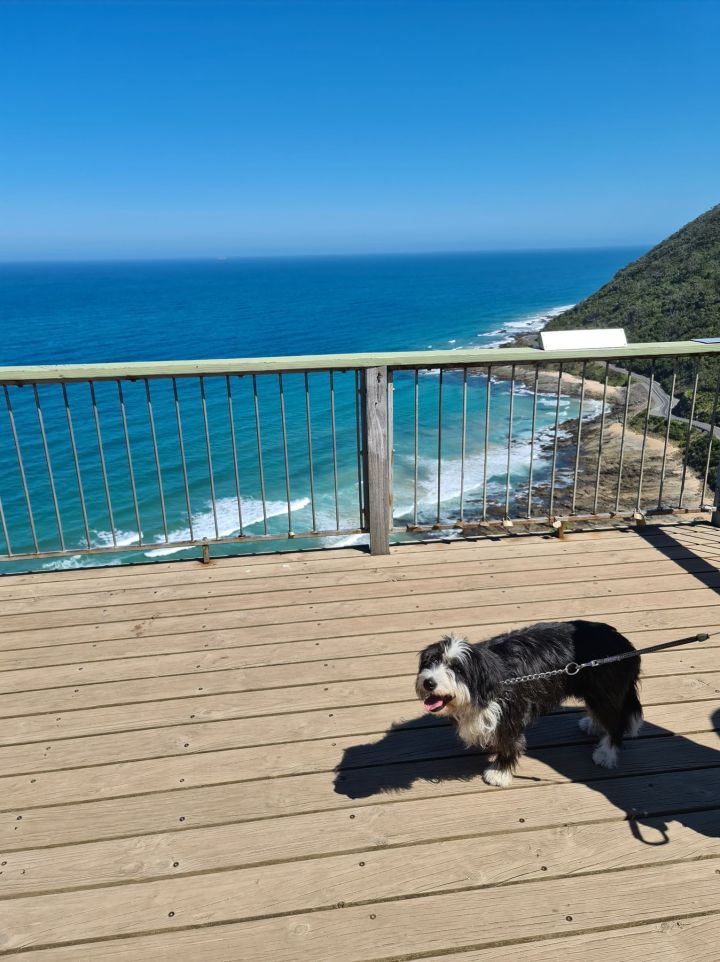 This dog deserves the world.

Alright so en route to hit up our ol’ mate Lizzie at Wildlife Wonders, we stumbled across the most baffling discovery since whoever found out it was fine to eat a small section of blowfish. 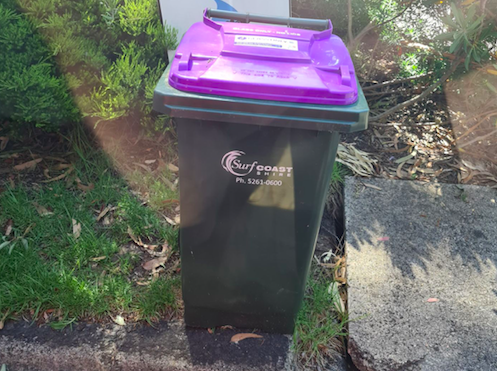 The Great Ocean Road. Everyone’s heard of it, but who among us has heard about the purple bins that live there? Well, people who live there, I suppose, but not this little green-red-yellow bin-chicken.

This was supposed to be a leisurely vacation and instead, it’s launched an all-out investigation. What goes in the purple bins? Is it recycling? Rubbish? Potions? Is the Great Ocean Road a front for Hogwarts and this is where they discard their used magic?

After shaking all of the questions I’ll undoubtedly have for years to come, we eventually got to meet Lizzie, who kindly walked us around a pocket of Victoria where the bush meets the sea — surrounded by a fox-and cat-proof fence, Wildlife Wonders protects flora and fauna unique to Victoria while letting visitors have a guided gander through wildlife that might otherwise be extinct. Also, I saw a koala sleeping and now all I can think about is how he manages to sleep while balancing on such a narrow branch.

After falling in love with and having my heart broken by a koala who doesn’t even know I exist and perhaps never will, we drove Bigger Big Red to what would be our accommodation for the next two nights, Sky Pods nestled on a hill so high that I swear we were driving vertically for about 20 minutes. If you want a secluded sleep where you can practically touch the stars (and steal one if you’re morally bankrupt, I decided not to like the angel I am), this is the place to be.

Featuring floor-to-ceiling windows that treat you to the Southern Ocean and surrounding rainforest, each Sky Pod comes fully equipped with everything you need — a kitchen, bathroom and bedroom setup that was absolutely designed for loved-up couples to be romantic. 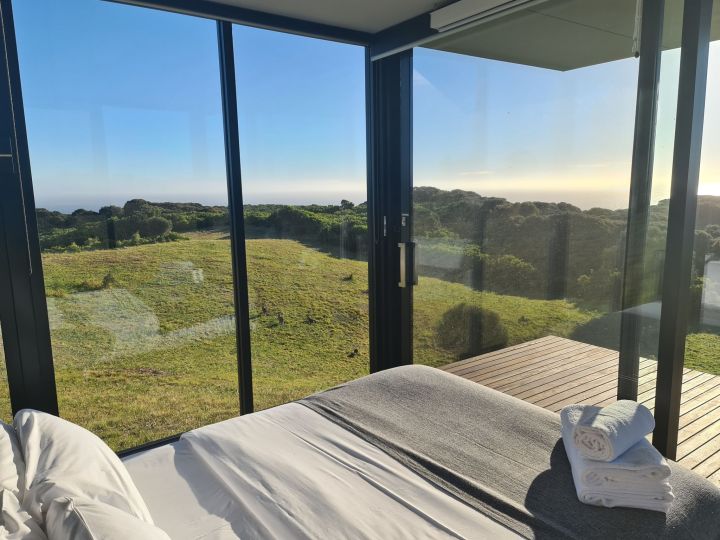 As we’re more platonic than partnered, we spent the first night in our room for two watching the Britney Spears doco on the projector because priorities are important. 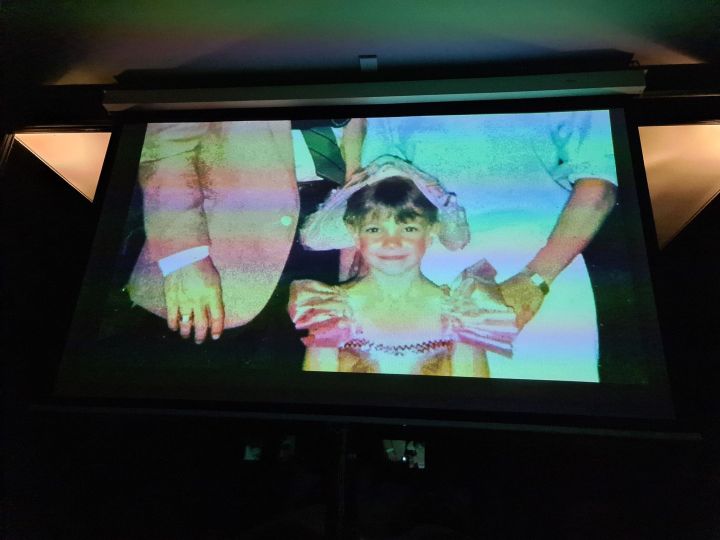 Nothing screams a good night’s rest quite like a truly upsetting documentary made about a traumatised singer’s life. Surprisingly, we konked out as soon as it finished so I’m not too sure if it was the doco, the bed or the long day that was the cause of our proceeding eight-hour comas.

Probably all of the above.

The next morning we were up bright and early to get a quick bite and blend in with the locals (saying ‘How cute’ every five minutes definitely hindered our efforts), before it was off to an even larger mountain for another good ol’ fashioned game of Let’s Get Lost Again.

At this point it was becoming apparent that whether we had a GPS, a Melways or another car in front directing us to each location, we’d still manage to get lost, so we decided to lean into it and accept that’s just who we are as people.

We arrived at The Otway Fly Tree Top Walk right on time depending on who you ask, and yet again we were tasked with the impossible decision of deciding which way to go. 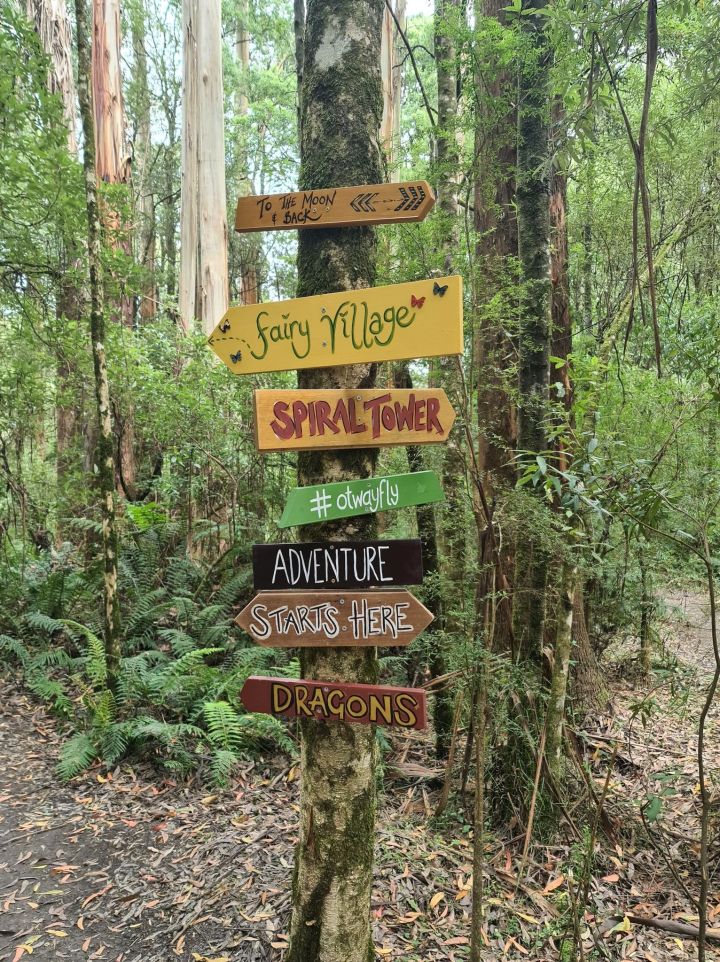 I personally wanted to suss out what the dragons were up to but years of watching Shrek has taught me to never chase a dragon. Actually, Gia and Requiem for a Dream taught the same lesson, for that matter.

After deciding against potential third-degree burns, away we went to stroll around walkways 30 metres above the ground. There’s one spiral staircase, in particular, that is not for those with a fear of heights (or a fear of stairs). Forgive me for my shotty camera work, I was petrified of dropping my phone and given my track record, that was extremely likely to happen. 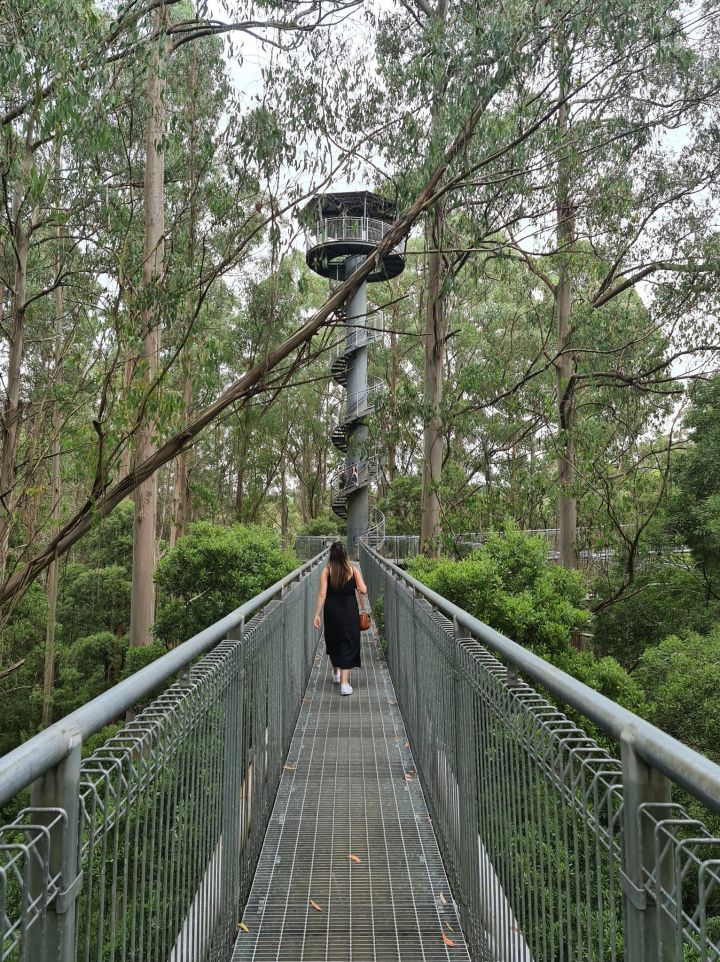 An hour’s drive later and we had rolled up to a wee town called Forrest, which was initially insanely confusing because I thought we were being stitched up when we were told the name, but no, it’s literally called Forrest.

Nestled alongside a quiet road in Forrest was Platypi Chocolates, an absolute shock to the senses in all the best ways — the huge two-story venue was decked out like one of those art deco (dunno if I’m using that right) mansions you’d usually take a walking tour through, but instead of art you can’t touch, there was chocolate left, right and centre.

The owner, Mandy, and her partner sat down with us for a gasbag over hot chocolate so rich, I got an instant sugar high and just wanted to hug everything. We sampled even more chocolate after that, all of which was made in-house and is so in-demand, people venture from all over Australia to get their hands on it.

I don’t want to accuse Willy Wonka of making inferior chocolate, but if ever wants inspo, I know where to direct him. 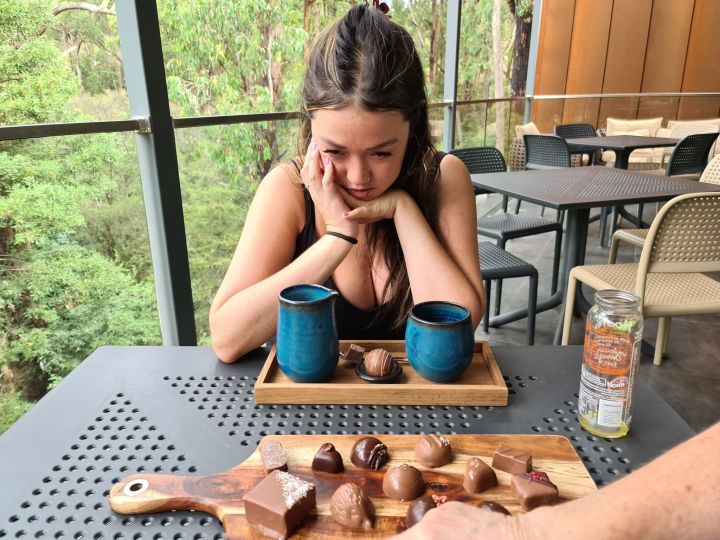 We bid farewell to the Platypi and waddled down the street to the second-last destination of the day, Forrest Brewing Company. Well, actually, we ended up being early for the first time in our entire lives, so to kill some time we checked out the local pub.

There’s just something about small-town pubs that really makes me feel like I’m in the version of Australia everyone overseas talks about. It’s like time freezes as soon as you walk in, and it feels like the only place left where everything isn’t painfully regulated with all of these “laws”. I love it, bury me there.

When we returned, we were greeted with a thoughtful (and briefly confronting) sight: an absolute spread of paté, meats, cheese, fruit, and an unexpected guest. 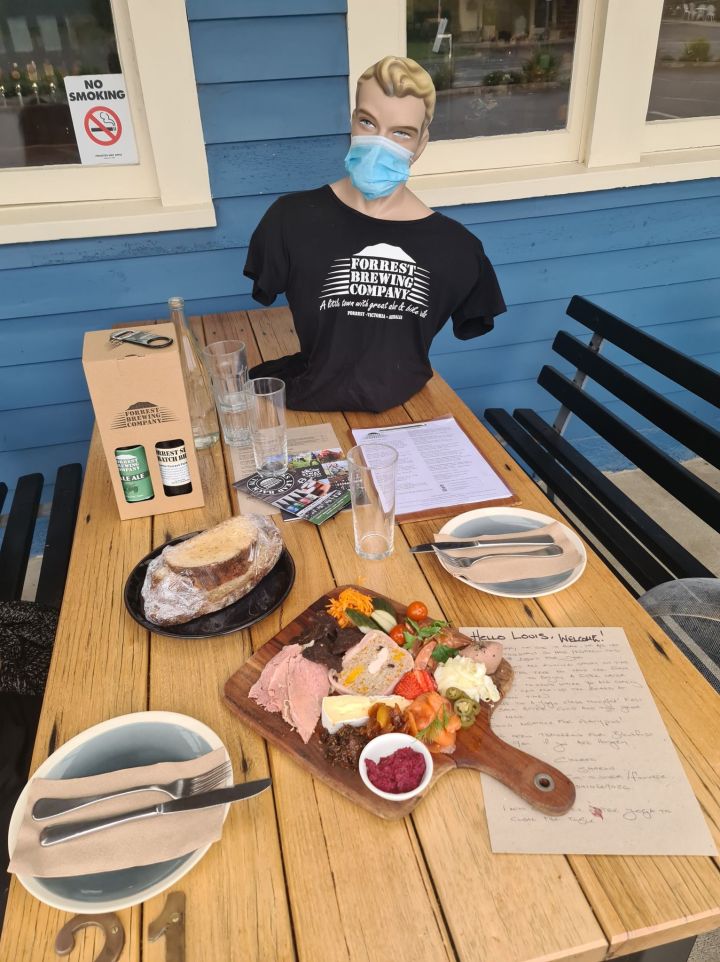 Boy was my face red when I realised I was trying to make small talk with a mannequin. I probably should’ve twigged earlier but I’ve had two-hour conversations with people who don’t respond so it wasn’t out of the ordinary, I thought he was simply the quiet type.

It’s also pretty obvious why regional Victoria seems to be faring better than Melbourne re: a certain global crisis — even inanimate objects are wearing masks.

I’m not sure how we did it after consuming a large baby’s weight in chocolate, but we polished off the platter just in time for people to arrive ahead of our final activity of the night, Dusk Paddling with Platypi.

Not the chocolate place, the animal.

Bruce, our tour guide, led us to the entrance of Lake Elizabeth where we would be kicking off a hike through the forest before getting to the water. It’s worth mentioning that neither me nor Hana had dressed for the occasion, so there we were, walking through the mud and rain in our white shoes and summery clothes, silently being mocked by our fellow paddlers.

Well, not really silently, once we got to know a few of them they openly laughed at us for being such inexperienced Melbourne dickheads which was so, so fair. It even said on the form, ‘Bring appropriate clothing, raincoats and proper footwear’ and yet, there we were looking like we were about to play a friendly hit of tennis.

Because we were sitting in canoes, we were advised against taking phones so I couldn’t get any happy snaps but, I’ve never been more at peace with life than I was sitting in the middle of a lake, a slight drizzle coming down with platypi popping up for air every once in a while.

We all had to be insanely quiet as to not scare them away, so it was just an hour-or-so of peaceful silence. Just before it wrapped up, I did start pondering what would happen if Tomorrow, When The War Began became a reality while we were on the lake, so perhaps it finished just at the right time — a downward spiral was imminent.

We arrived back at the Sky Pods just after 11pm, spent and saturated but so bloody satisfied.

It was a sombre departure the next morning. It had been less than 48 hours but I get emotionally attached to people and places alarmingly fast, so if Hana wasn’t in the passenger seat judging me, I would’ve shed a tear.

A quick stop by the Common Ground Project, a not-for-profit community farm that creates fair access to locally grown, healthy food, and we were back in stupid Melbourne and another of its stupid (but necessary) lockdowns.

Was it good to be home? I dunno, it’s so loud here.