Remember that time Kylie Jenner waged war against Snapchat and its stock plummeted exponentially? Welp, she’s now set her sights on Instagram after their BS updates and they’d better be worried!

The reality star took to Instagram to complain about the very app she was using. Specifically its recent update to make it appear more like TikTok.

She shared a post to her IG Story that read: “Make Instagram Instagram Again. (Stop trying to be tiktok i just want to see cute photos of my friends.) Sincerely, Everyone.”

She captioned the pic: “PLEASEEEEEEE.” 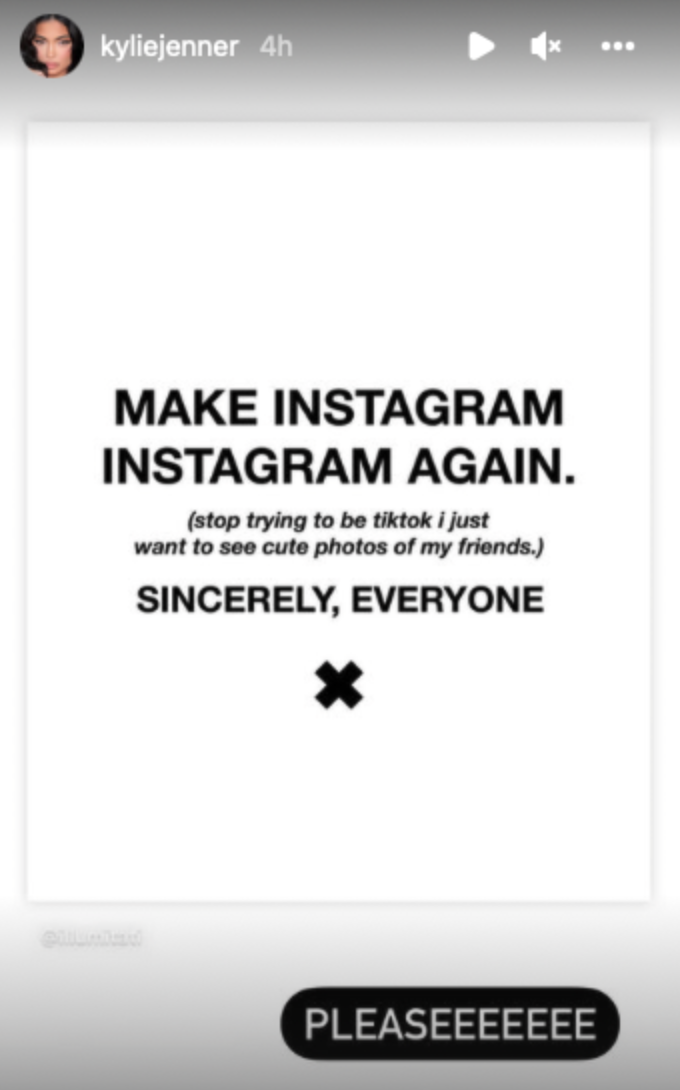 And Kylie’s not the only Kar-Jenner sis who fkn hates the update.

As I mentioned earlier, Kylie’s never been afraid to take to social media to complain about, well, social media.

Who could forget that time in 2018 when she single-handedly obliterated Snapchat by sharing the following tweet?

sooo does anyone else not open Snapchat anymore? Or is it just me… ugh this is so sad.

“Sooo does anyone else not open Snapchat anymore? Or is it just me… ugh this is so sad,” she tweeted.

Shortly after the tweet went live, Snapchat’s stock plummeted by AUD$2 billion, which is a helluva lot of damage from such a short tweet that she probs tapped away from the toot.

I’m not saying that I want the same thing to happen to Instagram because, well, my life would be a meaningless hole of nothingness without it.

But I’m hoping that it at least makes them get their shit together.

Earlier today, Head of Instagram Adam Mosseri addressed the negative response to the changes in a weird YouTube apology-esque video.

“It’s a test to a few percentage of people out there,” he said.

“The idea is that a more-full screen experience — not only for videos but for photos — might be a more fun and engaging experience.

“But I also want to be clear: it’s not yet good. And we’re going to have to get it to a place if we’re going to ship it to the rest of the Instagram community.”

READ MORE
The Head Of Instagram Has Explained Why The App Has Gone To Shit & No, He's Not Sorry

Mosseri went on to address the other main complaint users have: the app’s focus on Reels rather than posts by our mates (AKA the shit we actually wanna see).

“Now I want to be clear: we’re going to continue to support photos — it’s part of our heritage,” he said.

I wanted to address a few things we’re working on to make Instagram a better experience.

Please let me know what you think 👇🏼 pic.twitter.com/x1If5qrCyS

Let’s hope the whiny energy of Kylie Jenner works and Instagram gets restored to its former glory!