Pushing boundaries is an important part of promoting change and progress. But to push boundaries in a positive direction, a degree of foresight, intelligence and justifiable intentions are required. So what happens if you take those out of the equation?

Australian street wear brand Unit have picked an image to promote their new collection that is a beautiful example of lowest common denominator boundary-pushing.

The collection is called “Age Of Panic” and as an interesting marketing approach, Unit have selected one of the most recognisable images taken this century to promote the clothes on facebook. It’s instantly recognisable – it’s iconic, really. And it really captures the essence of “age of panic”.

I’m sure you have at some stage seen this photograph, captured of a man falling from the World Trade Center’s Twin Towers on the day of the September 11 attacks. 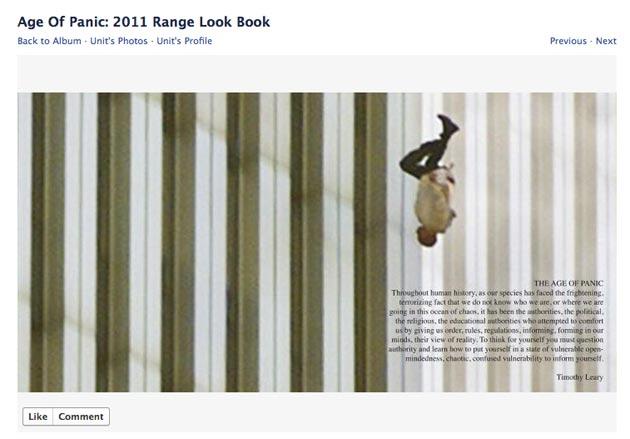 The brand has knowingly taken advantage of an image that is so powerful and so disturbing – and one that is immediately identifiable to anyone with access to a tv/newspaper/internet in the last 10 years. But the worst thing is that they have had the misguided daring – or gross insensitivity – to use that photo to make a statement about clothes.

I’m sure they think they are pushing boundaries and no doubt they are intentionally trying to provoke shock. But to push boundaries you need intentions that are intelligent, relevant and meaningful. Not just shock for shock’s sake. The incidental fact that it’s Remembrance Day – the day when we are supposed to reflect on the people who have been killed as a result of war – just makes Unit’s use of that particular photo even more tasteless.

Fuck free speech for a minute. Human compassion and human respect should come first. That picture isn’t theirs to use. Not to sell a few lousy t-shirts.

Sorry to have given them publicity.