Gigi, Kendall, Bella + Co Make The 2016 VS Runway Go Off Like A Cracker

IT’S THAT TIME OF YEAR!

Actually, no – not Christmas. We’re talking about the ever-illustrious Victoria’s Secret Fashion Show, which has just happened in this delightful year of 2016.

Here’s ya best looks, straight from the runway in Paris: 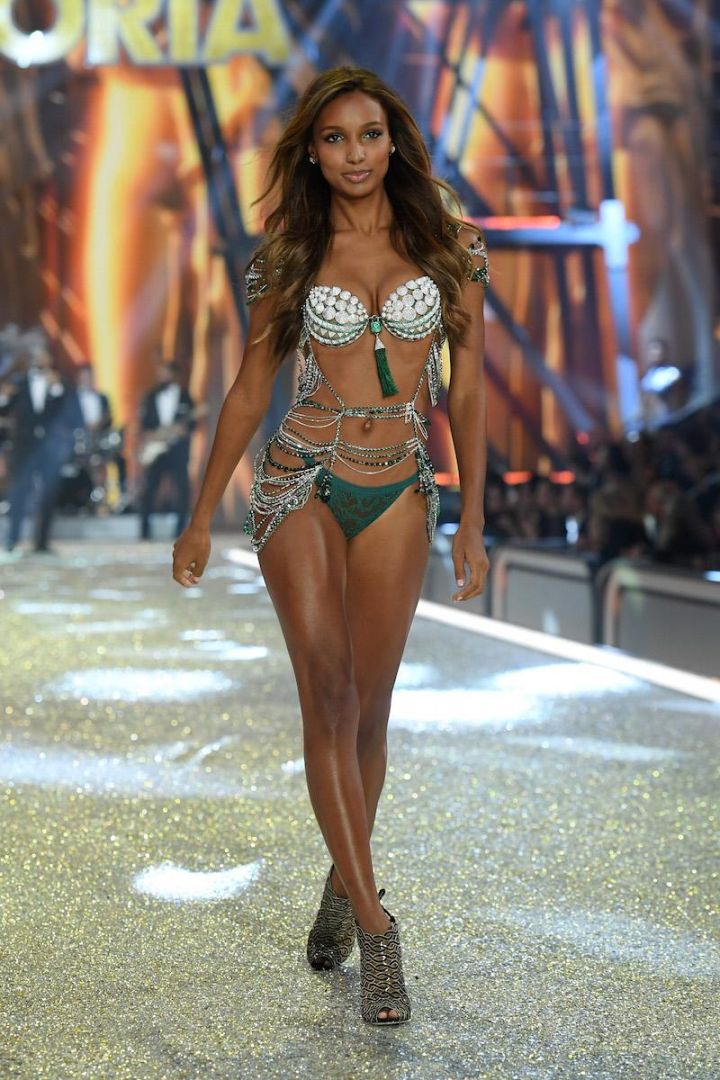 Yup, here’s your goddamn Fantasy Bra. This diamond-encrusted bastard is worth approximately $4 million, according to Forbes. So, y’know… if you want to have purchase insurance for your boobs. Jasmine Tookes, this year’s boob-owner gifted with the Fanstasy Bra experience, looks gosh darn mother-lickin’ beautiful, regardless of her no-doubt crippling anxiety from carrying $4 million on her baps. 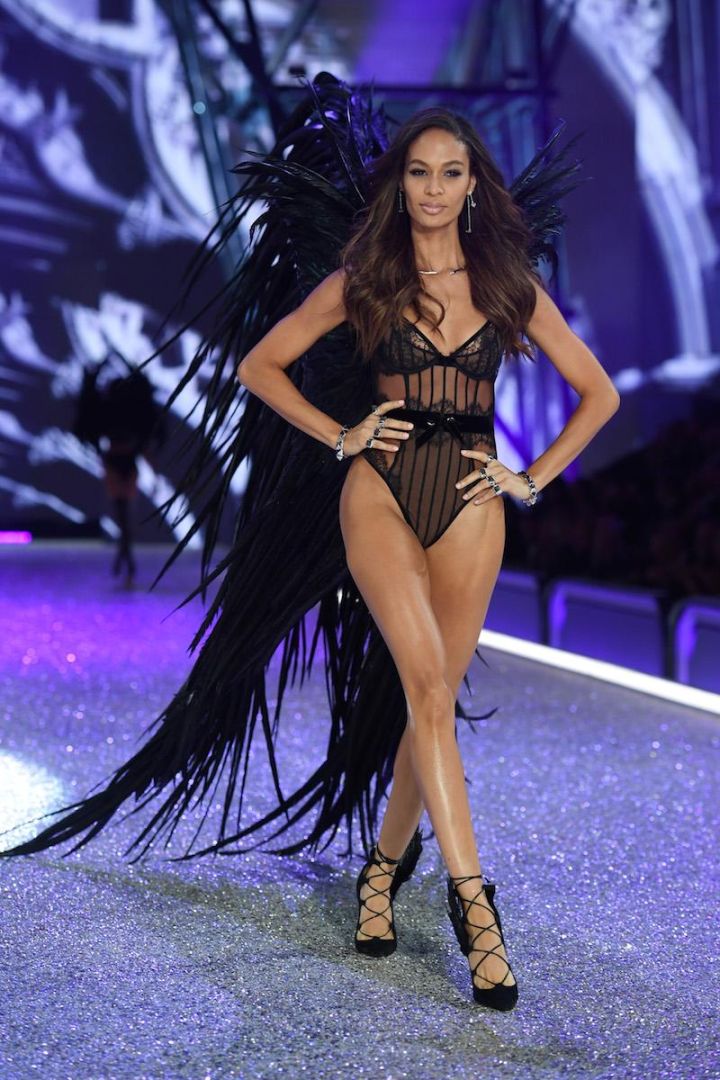 Pretty dark angel from hell, probably. Smallsy looks as though she’s come to claim your soul while also practicing absolute hyper-cuteness in a v. feminine bodice. I’ll like, happily give her my soul. Like, it’s hers now.  She can do whatever the fk she wants with it, I don’t even care bc too cute. 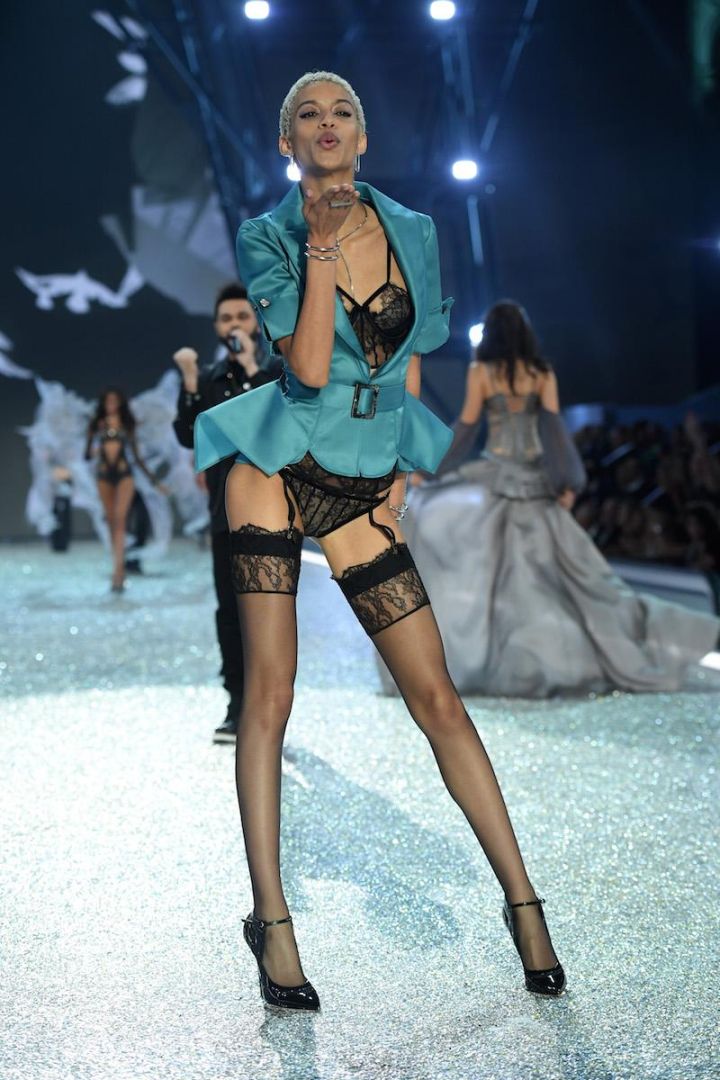 Yes! This newbie SLAYED; she blew other girls who’ve done this a thousand times out the goddamn water. Her excellently 50s peplum set with thigh-highs makes me want to google Madmen-themed erotica. Also, look at those legs? Like wtf, how are they that long? I’m mad. I’m mad about this. 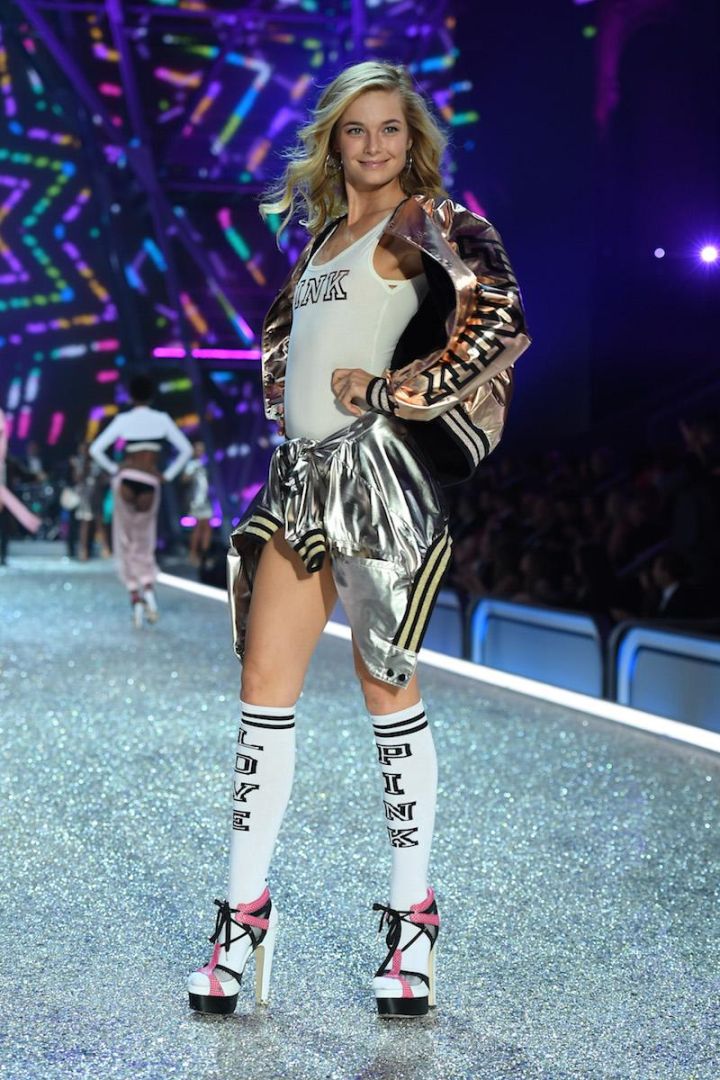 All the PINK shit with the activewear and chunky unflattering heels makes me personally want to vomit, but look, Bridge is adorable enough to pull it off. Why is she wearing two jackets tho? Who puts on two identical bomber jackets? This styling is wack, man. Goddamnit Bridge, you lucky you cute. 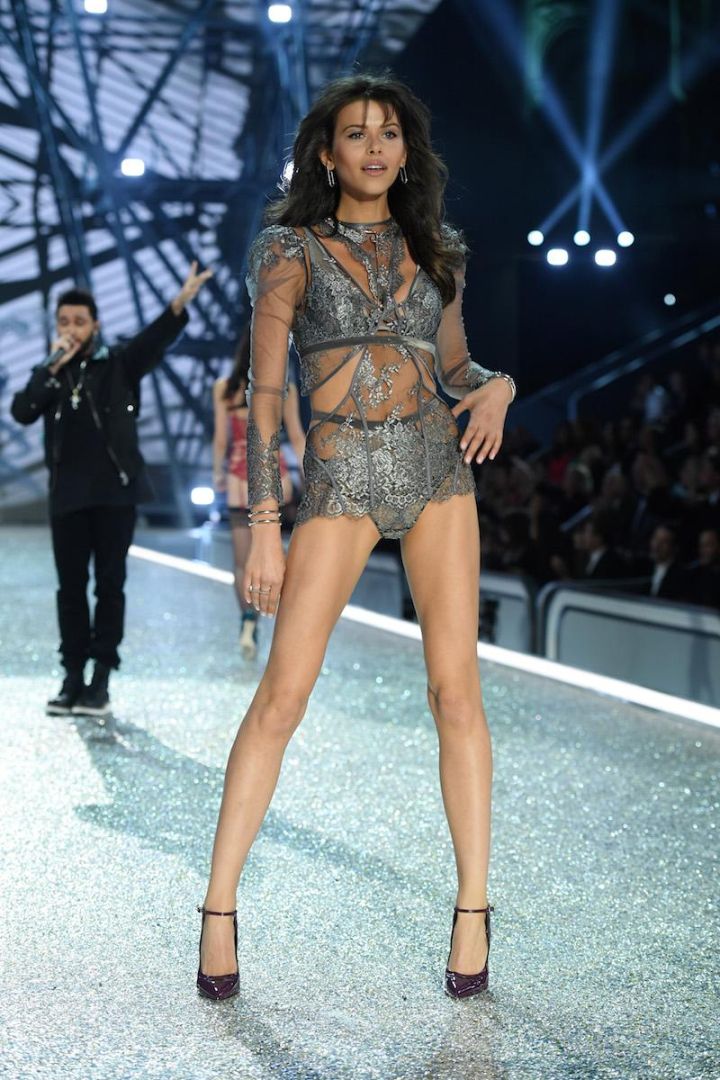 Holy hell Fowler; we know we stole adopted you from New Zealand technically, but you are making Australia so damn proud right now. Look at you in that lace chainmail get-up. You look dope. If that skirt was a bit longer, I would legitimately wear that outfit out. Beyond A+. 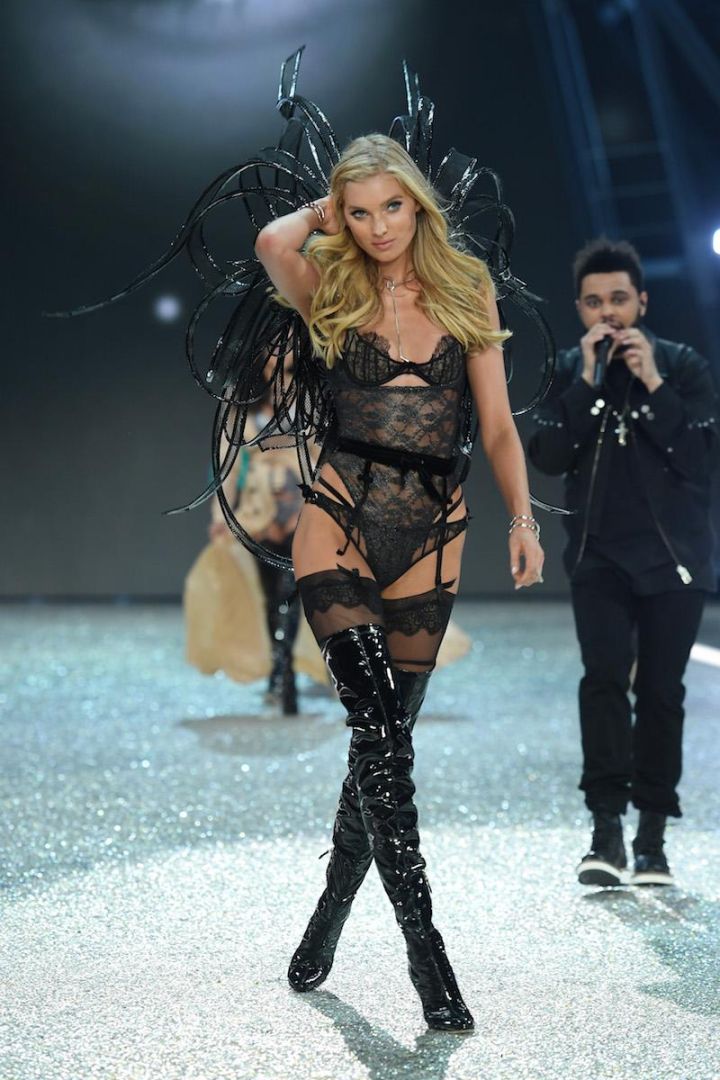 Hoskie’s knocking ‘em out with one of those delightful base-level ‘black lace corset with thigh high stockings’ deals; the crème brulee of lingerie. But she’s paired it all with ‘don’t fuck with me’, ‘Pretty Woman’-style thigh high patent leather boots, so we now pray at the church of Elsa. Amen. 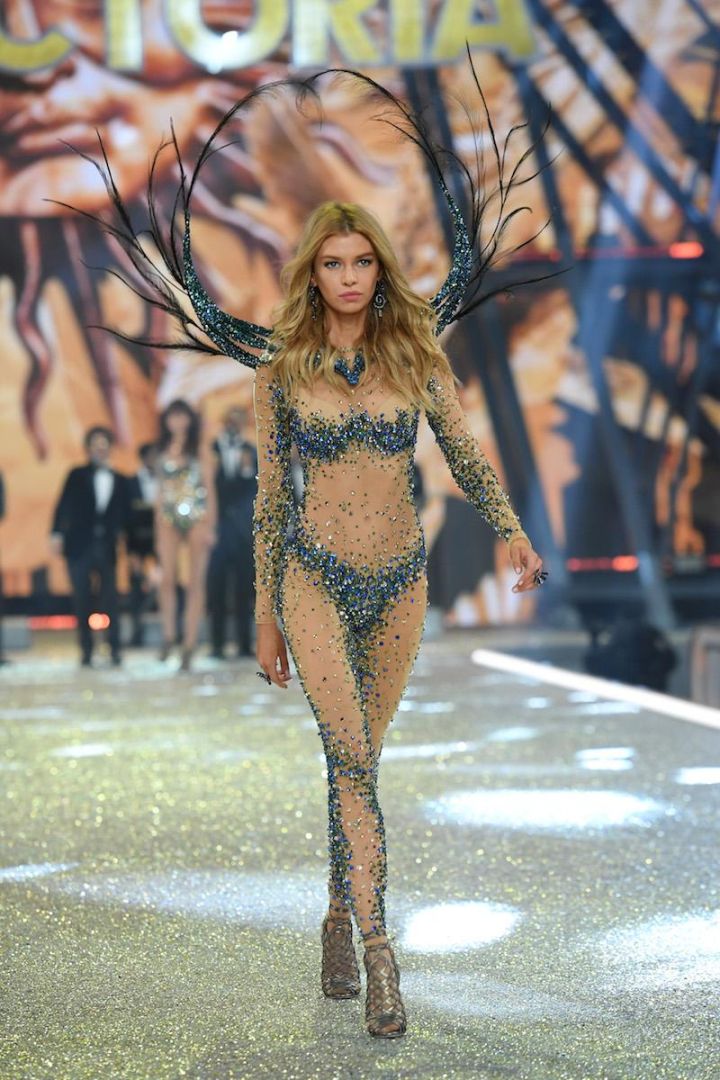 Stella’s jumping on some mad illusions here, and that moss green isn’t a colour I’d personally choose for my own lingerie collection but fuck me, it looks pretty damn good. The nude illusion, the jewels, th feathers – Stella’s peacocking right now, people. 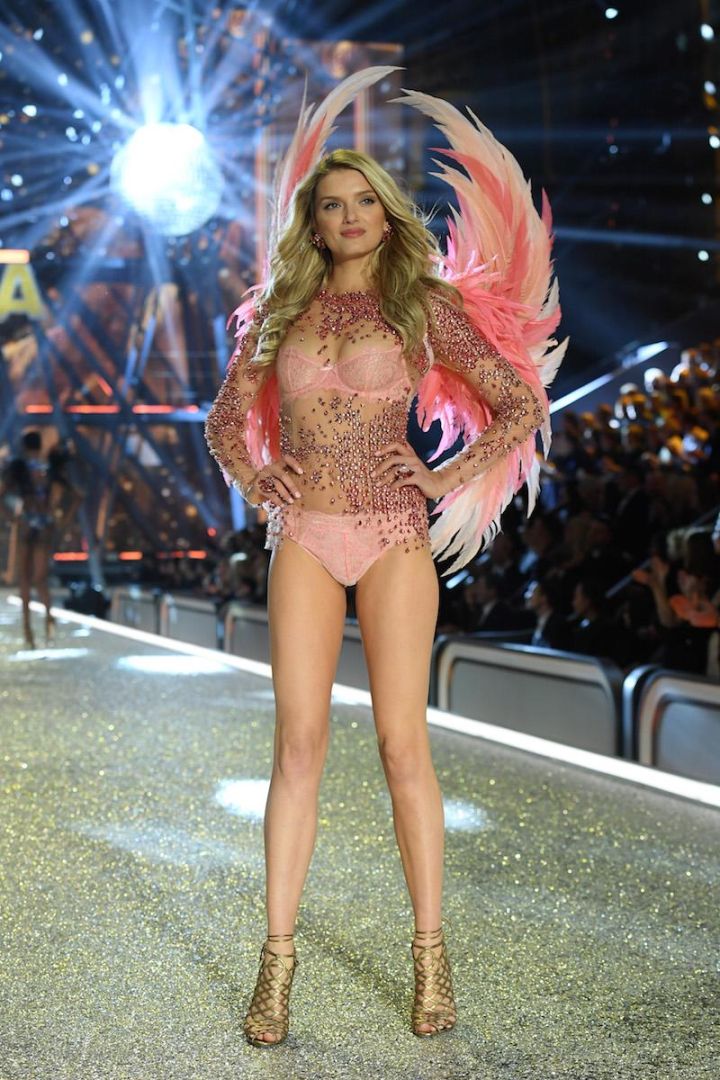 Lily’s following in Stella’s footsteps, the nude illusion vibe. But rather than a peacock, Lily’s pulling some real phoenix hours – complete with fireball illuminating the rebirth. We’re witnessing the Donaldson renaissance period, yo. 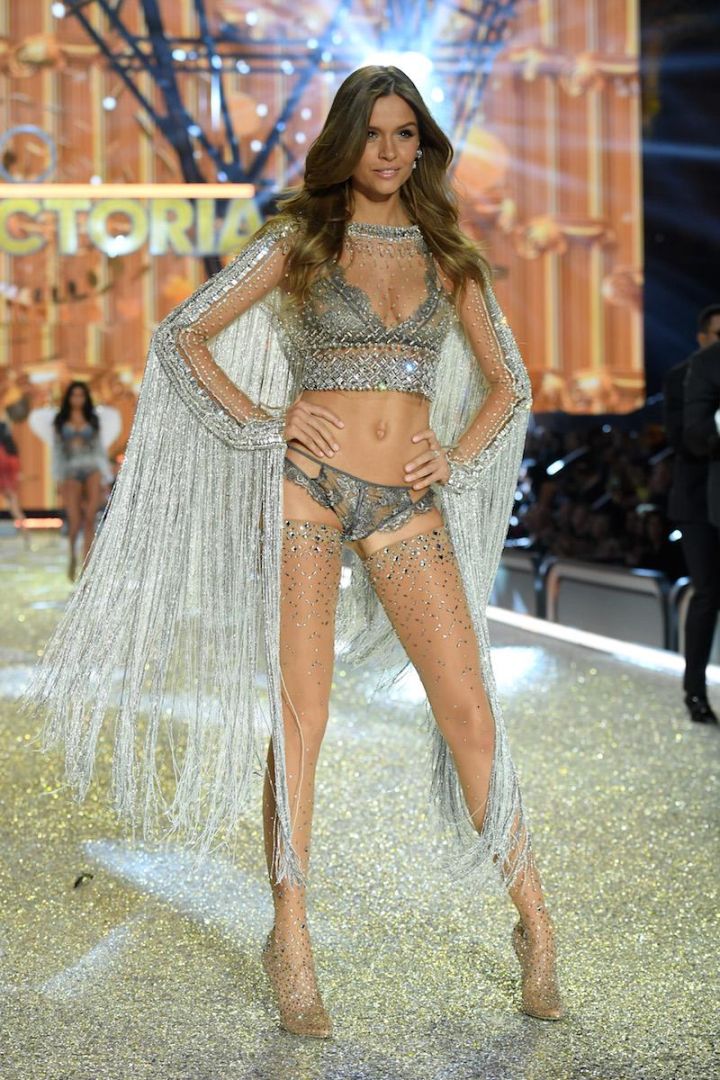 More chainmail, and we’re vibing it. Paired with the floaty silver cape, Jo looks like a beautiful princess who’s gone ‘you know what, balls to this princess crap – I’m going to war’. Like Mulan, or Arya Stark. Bad ass bitches, the lot of ‘em. 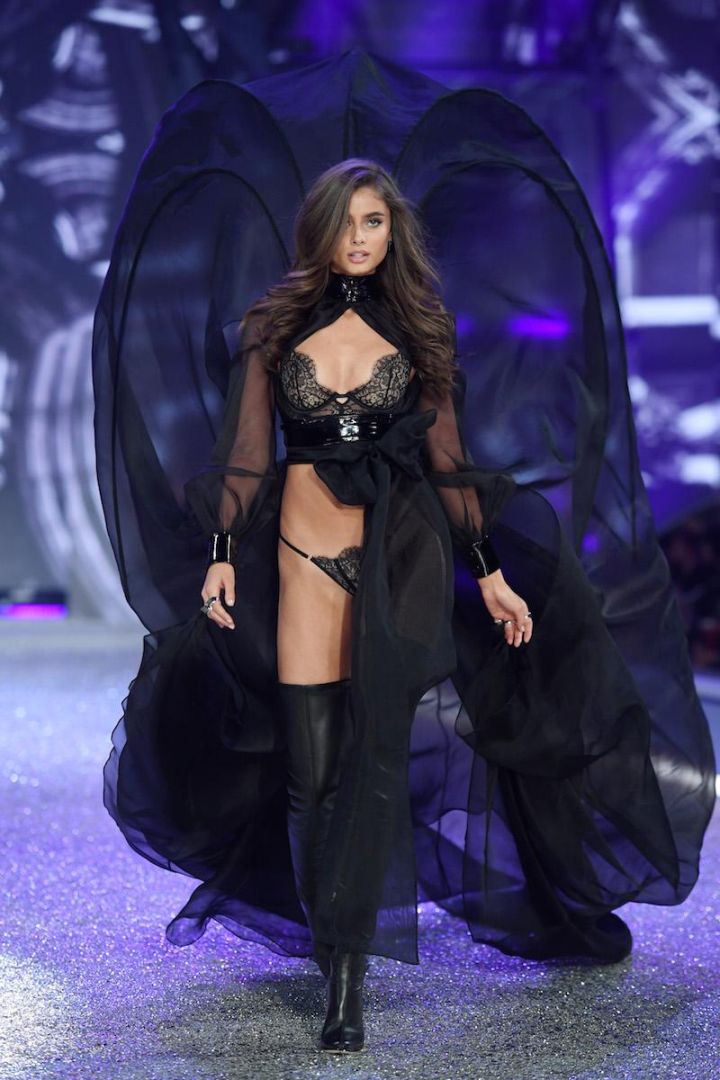 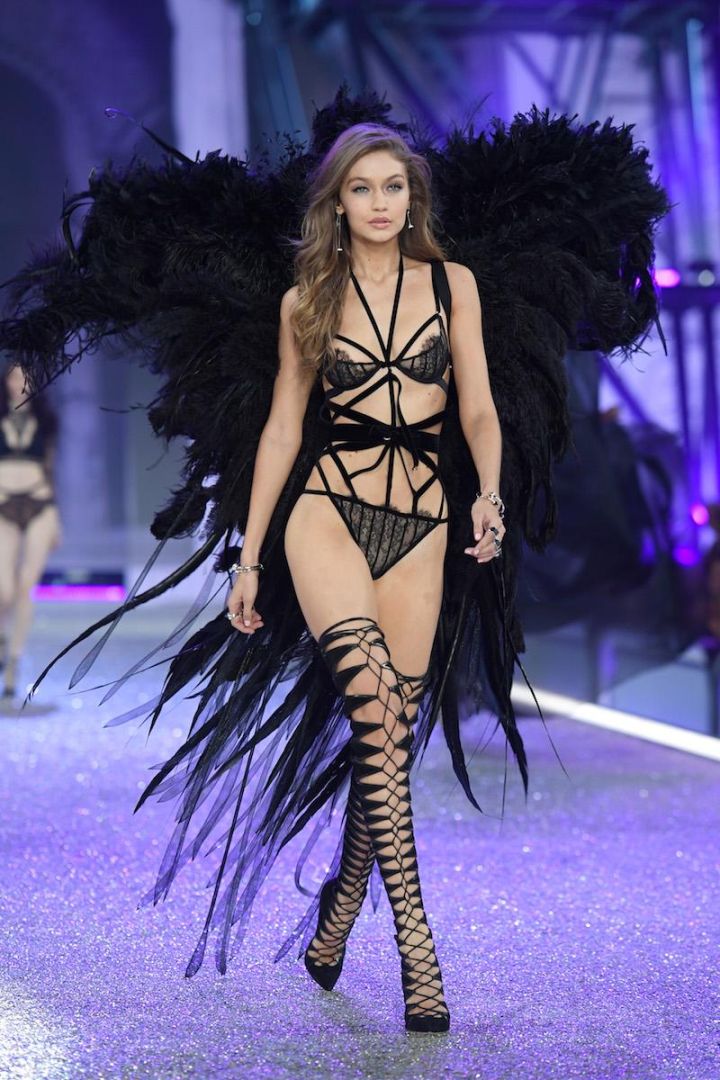 YES GIGI GET IT! Our girl is rocking enormous evil black wings and all straps, it’s a very angelic neo-gothic aesthetic and we are HERE FOR IT. (p.s. How heavy d’ya reckon those wings are? Christ, they look heavy.) 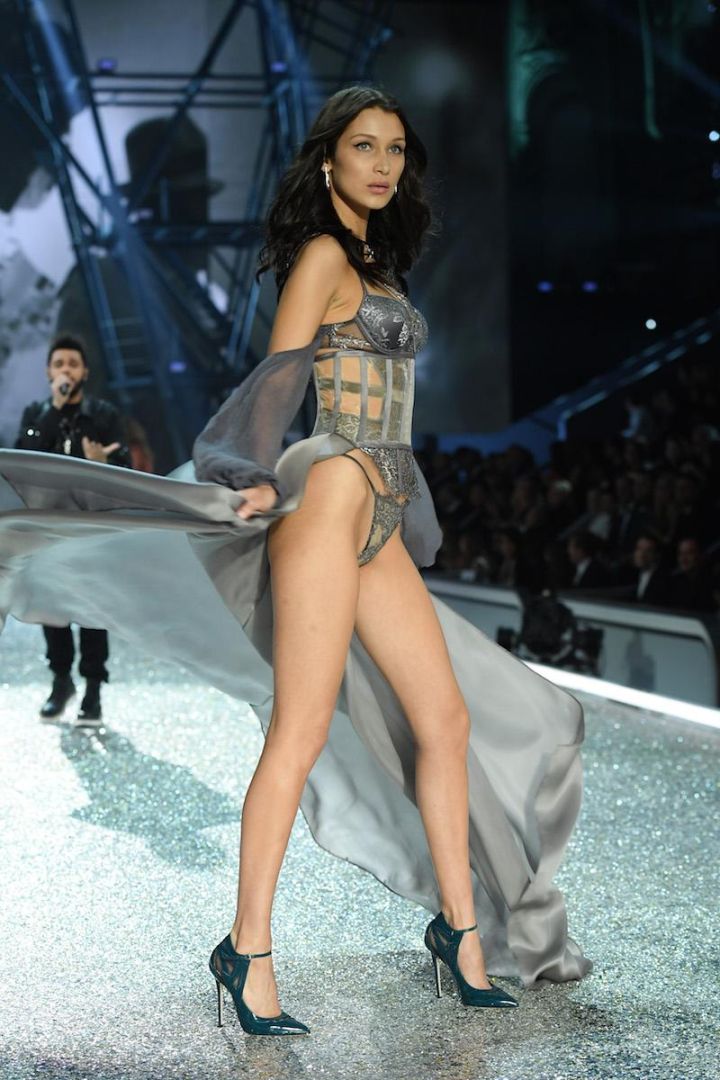 An enormous round of applause for Bella; not only was it her first-ever Victoria’s Secret runway, but she also had to share a stage with her extremely recent ex-boyfriend, The Weeknd. And she damn well killed it. She killed it. And hell, with her medieval bodice vibes, she looks like she could go into battle, tbh. 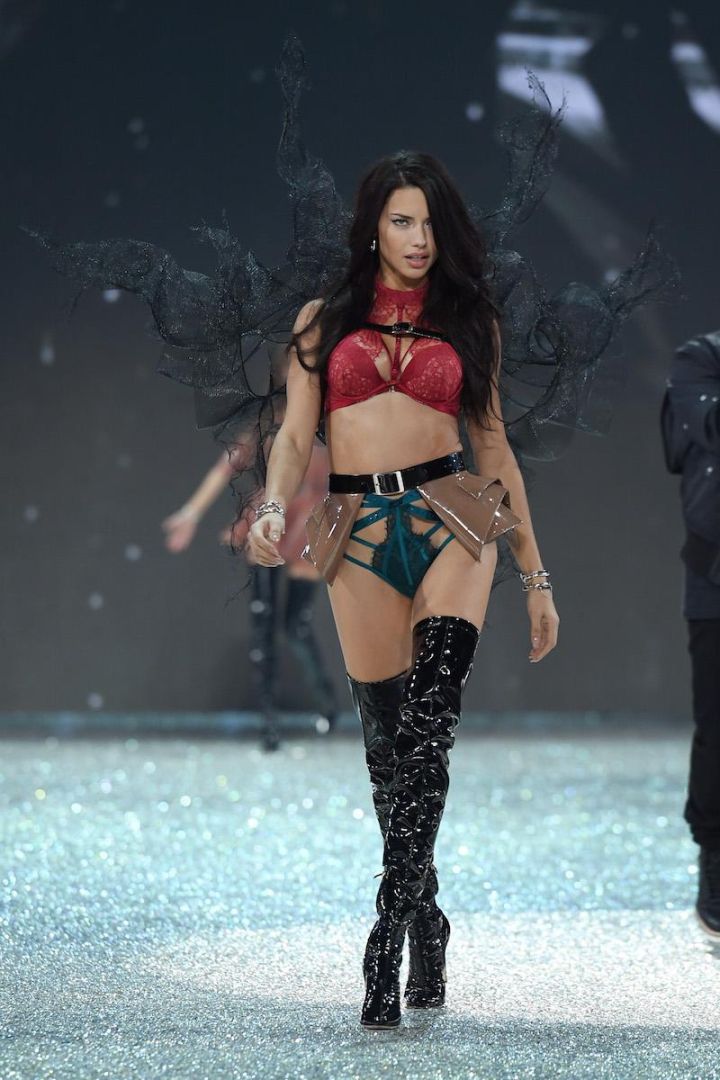 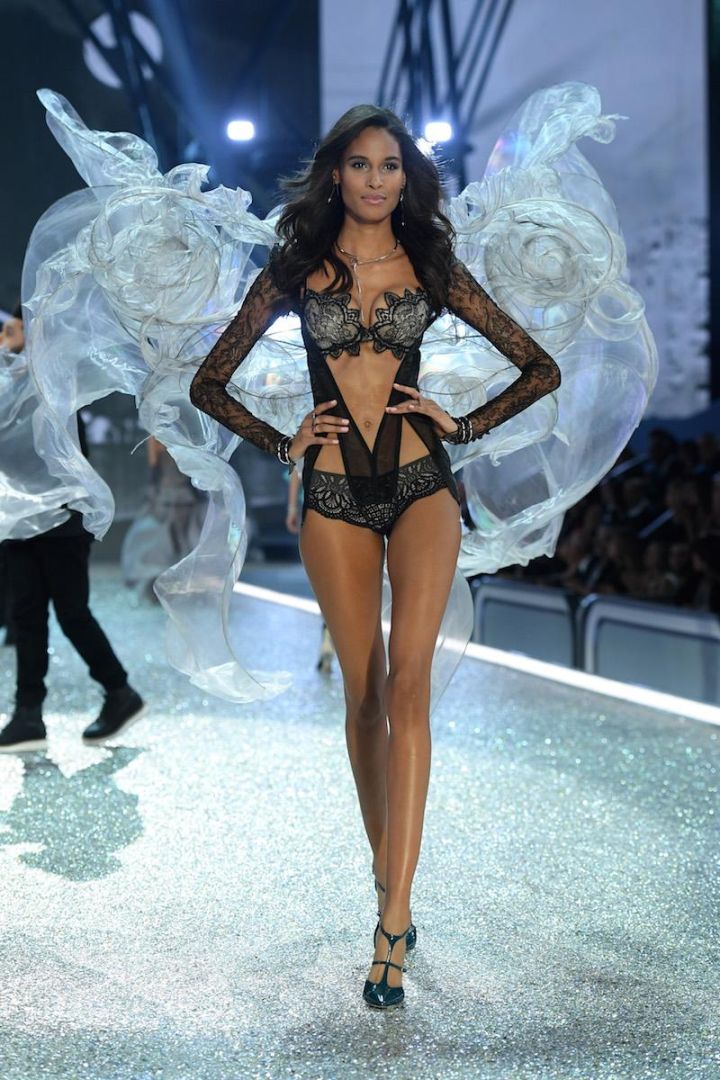 Cindy’s got wings that look like a legit wisp of smoke, so that’s cool. Like she just appeared there out of a cloud of mist. She didn’t though, she walked on to the runway on LEGS THAT SHOULD BE ILLEGAL. Her decorative bra & outfit looks very ‘angel on top of the tree’. Sexy Christmas is the best Christmas. 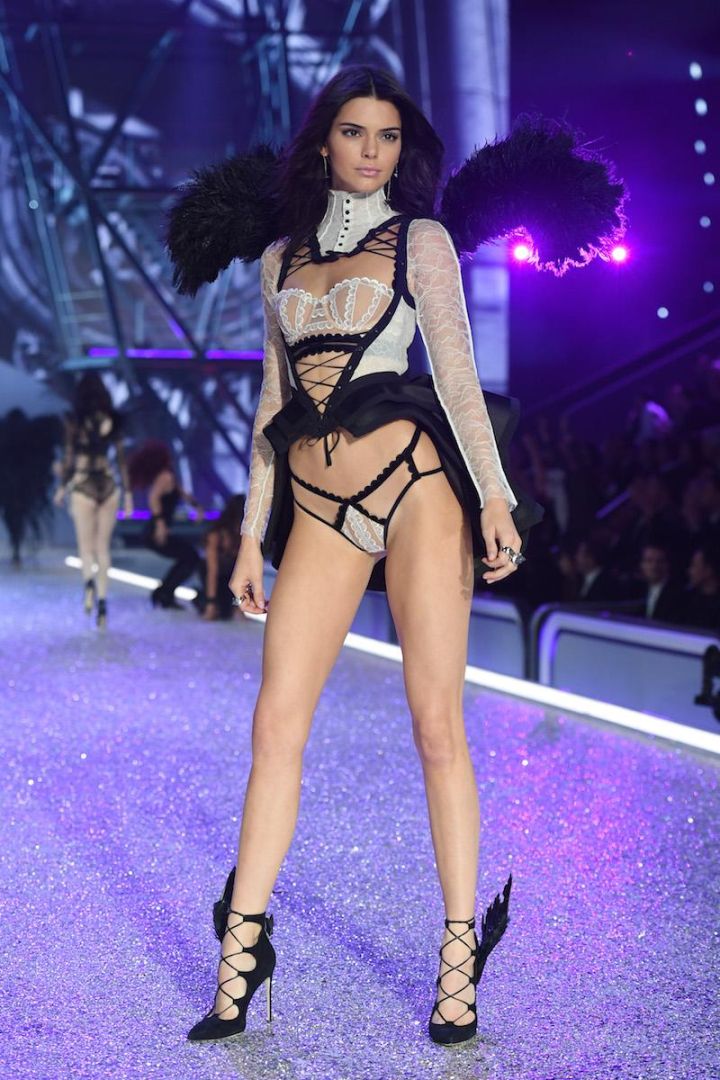 Look, it’s a lingerie show. Someone’s gotta get the fresh new take on a French maid’s outfit. And this year it’s Kenny. Luckily, she’s got a rockin’ Middle Ages bodice deal mixed with a French Renaissance collar, and wings on her back AND her heels. Brb, buying that collar for all of my lingerie so I look ~classy~.

And so, there we are for another year; our hunger for spicy lingerie has now been fulfilled, and must sustain us for another 12 months.

Thank you Victoria’s Secret, for all that you do.

Disney
There are no more articles to be viewed