The aforementioned couch appeared on a listing in a Hobart buy, sell & swap page and was first spotted by SBS Tasmania journo Sarah Maunder.

This is one of the best things I've ever read (from the FB group Hobart buy/sell) pic.twitter.com/D7d4lUKWc8

Please join me in a dramatic reading.

“Literally the most uncomfortable couch in the world,” Vicki the seller (or perhaps more accurately, give-awayer) began.

“I thought maybe someone could use it before I just take it to the tip. Maybe for performance art or something?

“I have no idea what on earth you could, or would want to use this couch for.”

I’m already hooked. We’ve definitely all been scammed buying furniture with two essential missing pieces on Gumtree or a shirt that’s actually for a child on Depop.

This is already giving me some serious contemporary art installation vibes. Uncomfortable and a little bit ugly? Surely it’s already worth $50,000 and pride of place in a Kardashian house.

The whole post is essentially a glorious metaphor for the collapse of late stage capitalism. Never have I seen someone so avidly try and not sell something.

As put by one commentator on the FB post, “the description is pure art”.

“I spent $400 on this couch and probably about $1000 in physio fees for my injured back, sitting on it for just two weeks while working from home,” the seller continued.

“If you take it, I can’t warn you strongly enough, it’s very uncomfortable and it will almost certainly injure you. I definitely can’t recommend it for anyone over 30. I can’t really recommend it at all.”

A win for the Gen Zs! Invite some trendy Brutalist architecture into your shit sharehouse! Punish your housemate’s terrible friends by insisting they sleep on what the seller has dubbed “the devil’s couch”!

That’s a sick name for a pop-punk band too, LBR.

“This is the devils couch. If you want to question whether an eternal evil exists, this couch will convince you,” they said. “Sitting on this couch will take you straight to hell.”

A couch AND an inter-dimensional portal? I’m packing my bags and scooting down to Hobart immediately.

To summarise, the poster listed some pros and cons of the couch.

“PROS: No evidence (so far) it is haunted. Just cursed.”

A crucial distinction, I will say.

But much like the shitty but slightly hot straight white male character in every TV show and film ever, at the end of the post there was a redemption arc for the Devil Couch.

Apparently it folds down into a “relatively comfortable” single bed.

Alas, according to Facebook Marketplace the couch has now been sold. Or, if your FB is set to pirate-speak like mine is, it’s been “pilfered”. 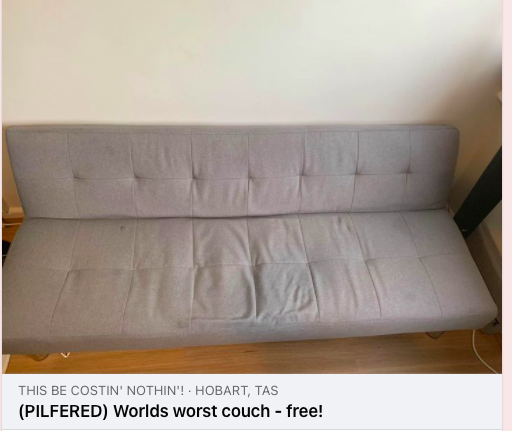 I can’t wait to see it covered in glitter and stuck in a Museum of Contemporary Art in five years.