Over the next six months, we’re going to be asking 27 young Aussies what they think about life, love, politics and more. It’s all part of our new docuseries ’27 Pedestrians’, and it’s going all the way until the end of 2020.

In just 10 days, more than 1,000 of you applied to take part. These final 27 Aussies have been hand-picked to make sure they represent a hugely diverse range of opinions, backgrounds and experiences.

READ MORE
We're Looking For 27 Young Aussies Who Aren't Afraid To Share An Opinion - That You?

Each week, we’ll be asking them all those questions you’ve either secretly wondered (“Do you believe in life after death?”) or argued about with friends (“Should Australia defund the police?”).

Their answers will come to you in new videos dropping every Wednesday night right over on our YouTube channel – so hit that subscribe button, stat.

Check out the first video here:

But first – let’s meet our 27 Pedestrians. 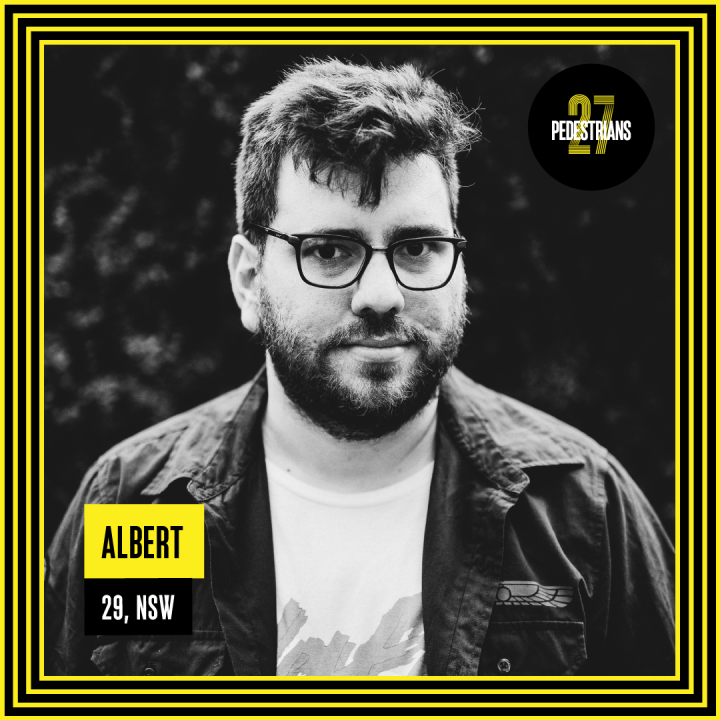 Albert is a media analyst and writer living in Parramatta in Sydney’s west. He’s married, chronically ill, and a self-described “Batman obsessed weirdo”. 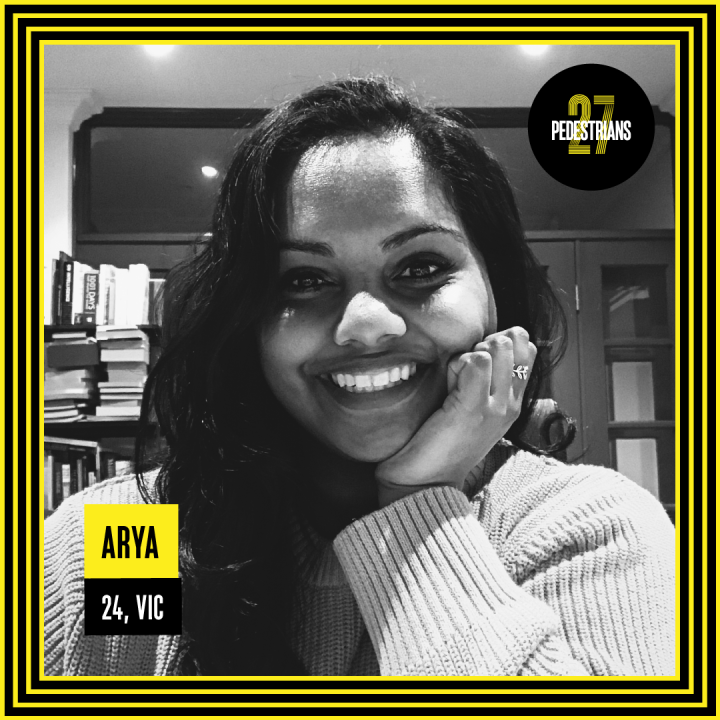 Arya is a scientist who’s completing her honours year at uni. She’s a Hawthorn fan, and when asked for five words to describe herself, used them to say: “loves avocado but is tragically allergic”. We stan. 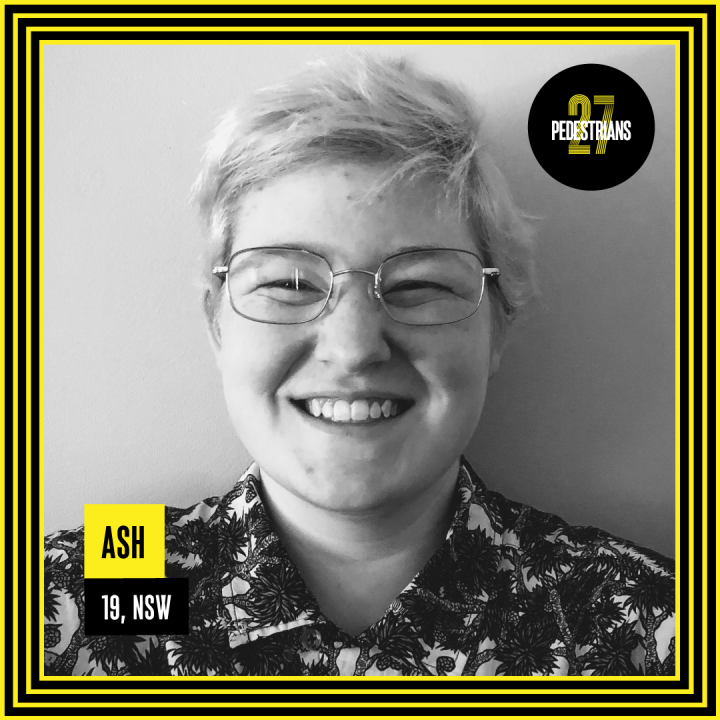 Ash is a retail assistant living in Sydney’s Western Suburbs. They’re gender fluid and asexual, and u

esse the pronouns they / them. We asked everyone to describe themselves so Ash asked for their mum’s help (love), and together they came up with: “Stubborn, empathetic, curious, diligent and sincere.” 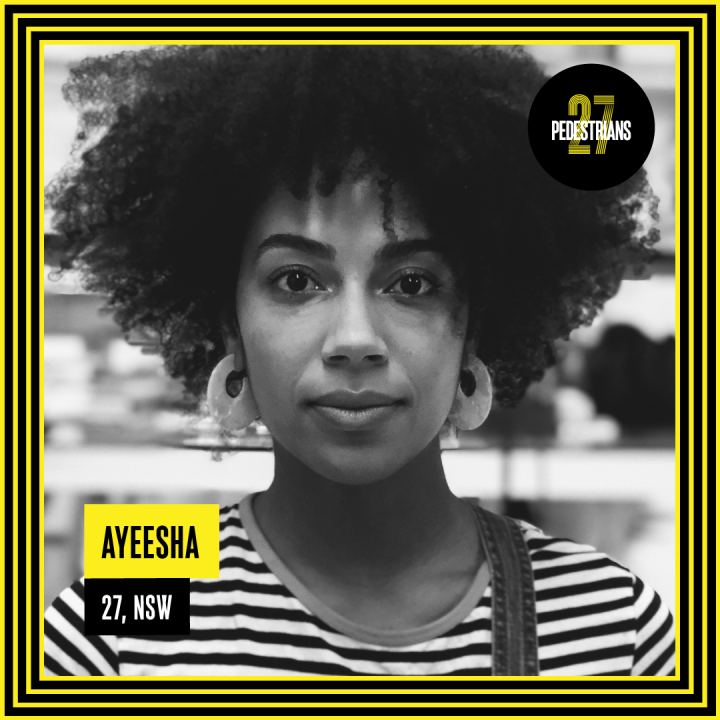 Ayeesha is an artist living in Sydney, who describes her political views as small ‘l’ liberal – as in, “not the Australian Liberal Party”. She’s an actor, writer, poet, contributor to FBI radio, and co-founded art collective Black Birds in response to both misrepresentation and a lack of representation of women of colour in the Aussie arts industry. 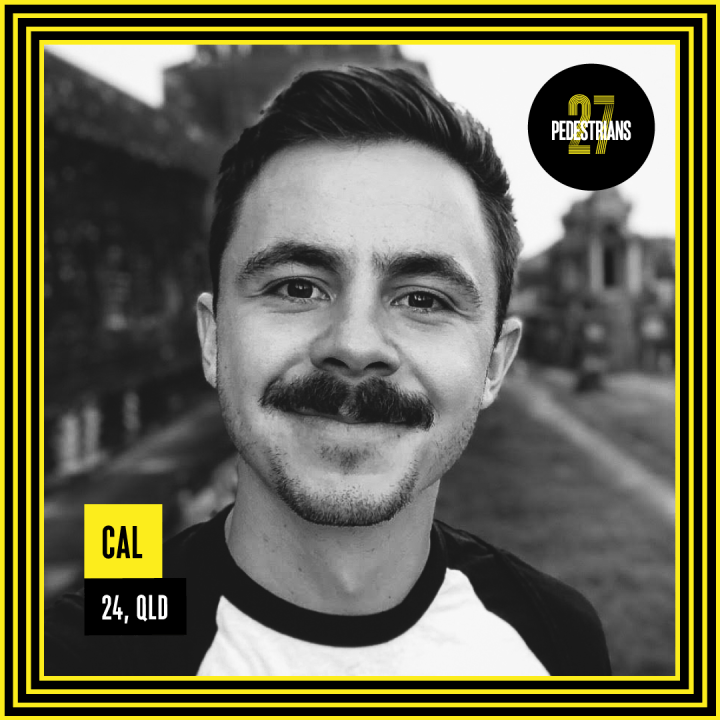 Callum – who prefers Cal – is a cheeky “history geek” who was working as a tour guide in Europe – you know, before coronavirus hit. He describes his political views as “indifferent” but himself as “driven and spontaneous”, and is waiting for the pandemic to be over so he can jet back to the other side of the world. 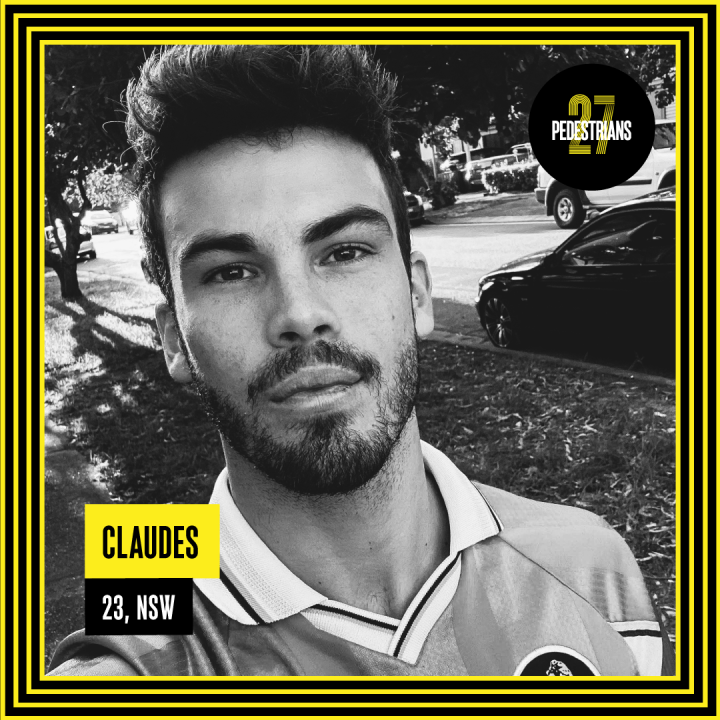 Claudio is a 24-year-old living in Sydney’s Eastern Suburbs. He’s a sports media presenter who’s (obviously) a fan of all things sports, and is also known amongst friends for using a fake name when ordering coffee. 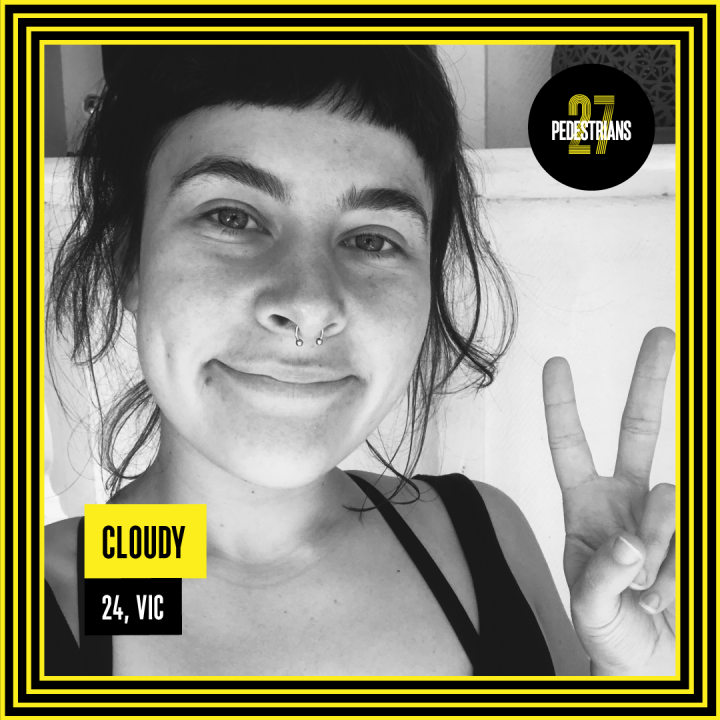 As Cloudy describes it, she’s a “check-out chick” and yoga teacher who says she has “no idea what I’m doing”. She’s a queer woman, hosts the Death By News podcast, and is the only person who answered the star sign question with her sun and moon sign. 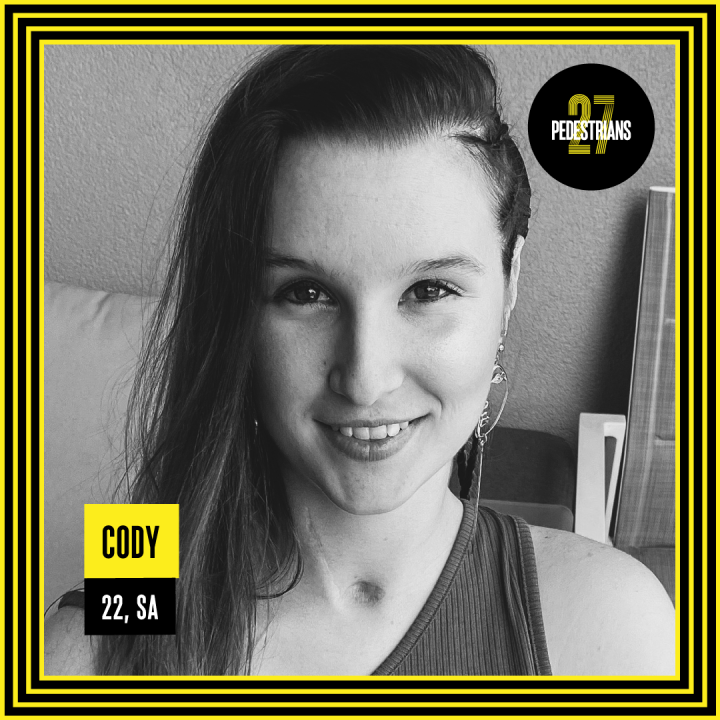 Cody is a university student, disability advocate, touch footy coach and market research data professor from Adelaide. A skiing accident when she was 16-years-old shattered her C5 and C6 joints and severed her spinal cord, leaving Cody with quadriplegia. As a budding touch footy player it was a “devastating blow”, as she writes on her blog, but she’s met her new challenges with determination and a smile. 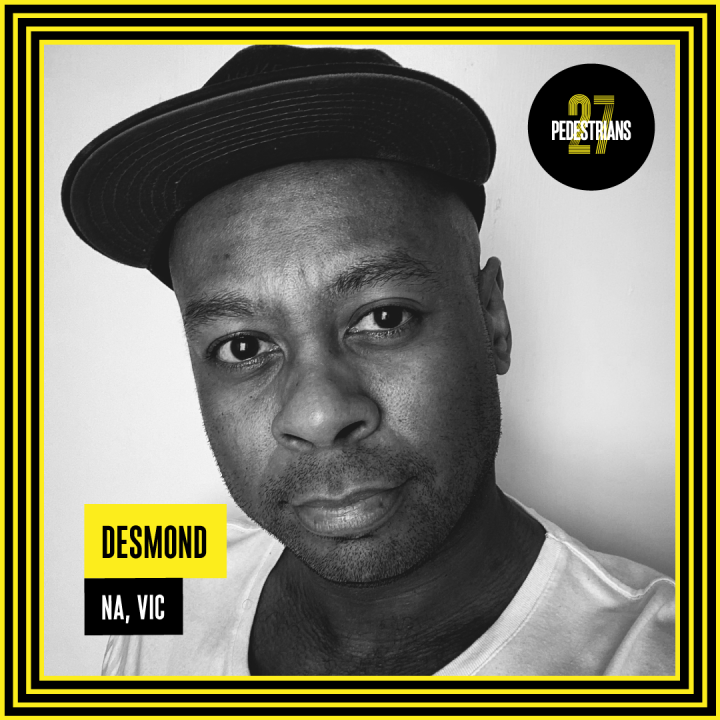 Desmond is an audio engineer who (understandably) loves all things music, and has a few hip hop tracks uploaded to Triple J Unearthed that you should definitely check out. He’s a bit mysterious, and prides himself on no one knowing what his actual age is… except P.TV, of course. This Melbourne boy is all about creativity, connection, positivity, artistry and truth. 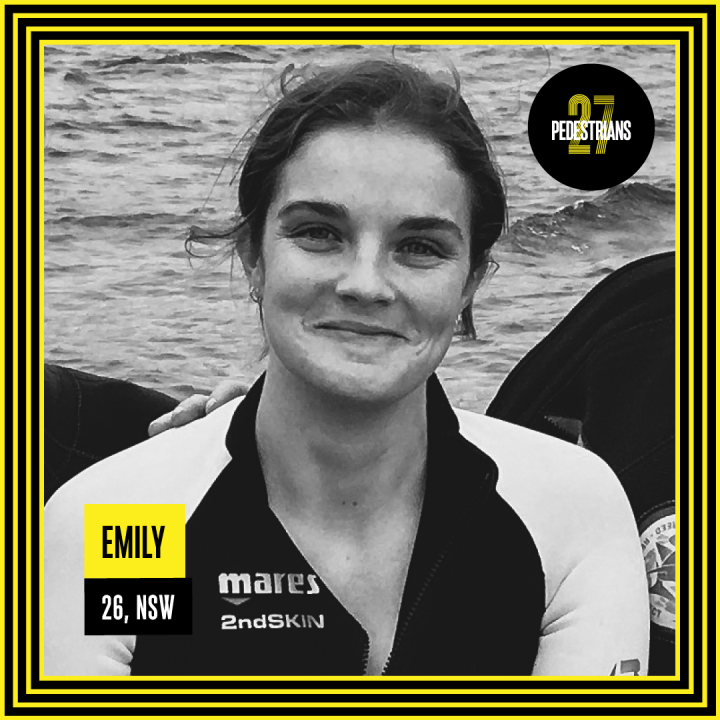 Emily is an aquarist in Sydney, which is like a zookeeper but for an aquarium. She’s passionate, funny and clumsy, and prepared to support any political party that takes climate change seriously. 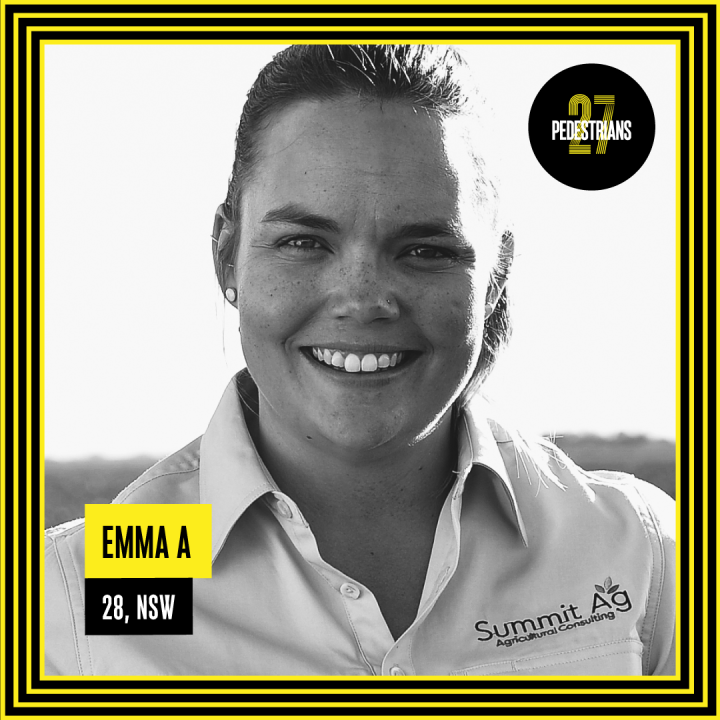 Emma is an agronomist and farmer from the Central West region in NSW, living in a town with a population of less than 1,500 people. She’s an advocate for agriculture, was a finalist in the 2020 NSW Young Achiever Leadership Awards, and launched an app called Yacker to connect people in rural areas. 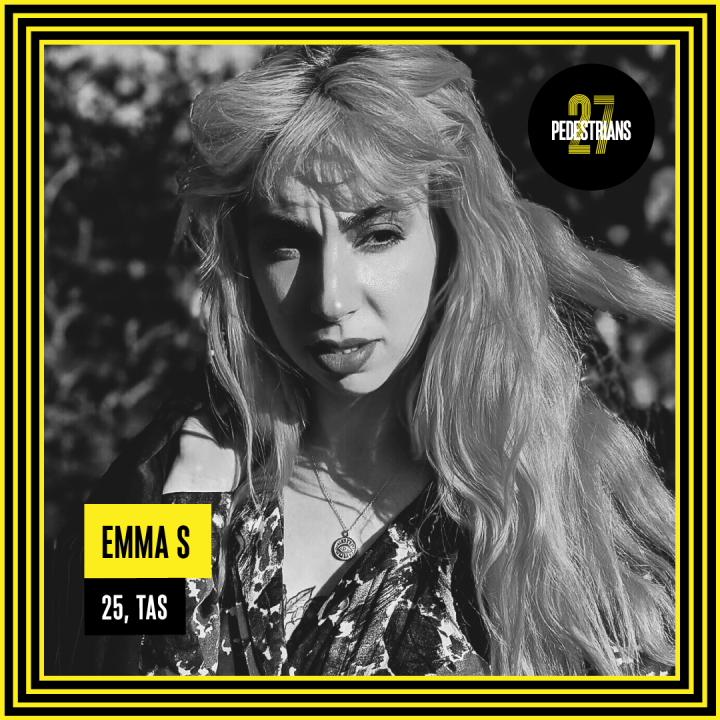 Emma is a theatre maker from Hobart who describes herself as “chatty pink hobbit”. Also – “exhausted”, which is the most relatable description for living in 2020. She’s regularly called a witch (and doesn’t mind one bit), dabbles with Wicca, and got swept up in the Animal Crossing phase like the rest of us. 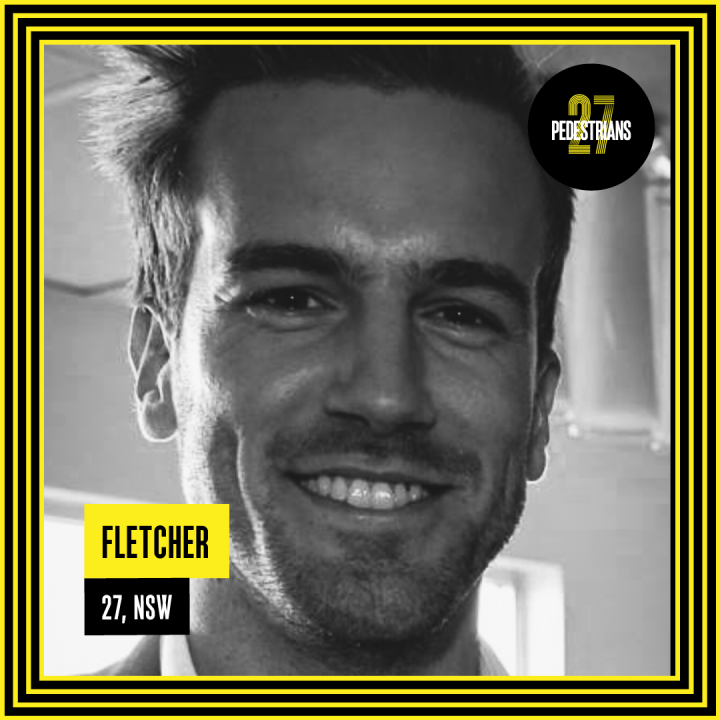 Fletcher is a finance broker and rugby fan who will probably roll his eyes at you if you tell him he looks like James Van Der Beek from Dawson’s Creek. 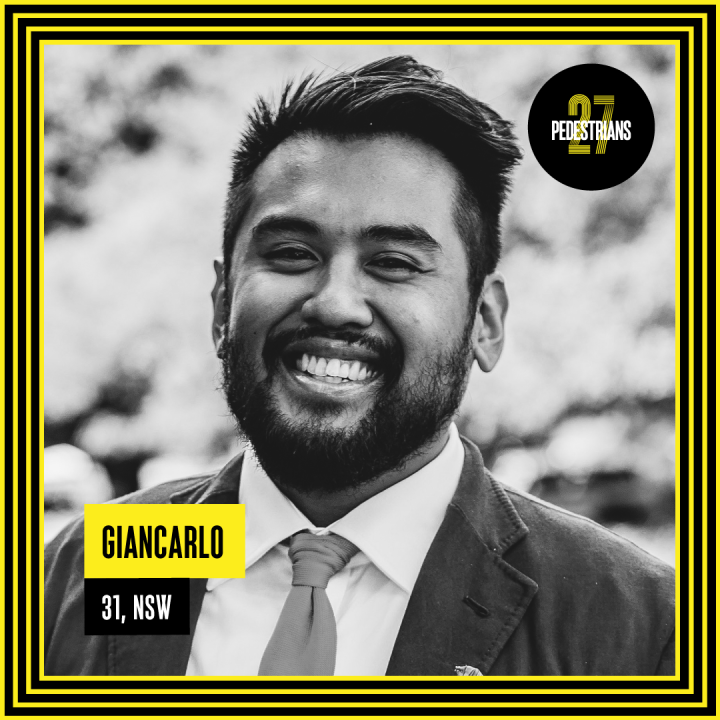 Giancarlo is a non-binary “policy nerd” who lives with their partner in Sydney. Professionally, they’re pretty busy – looking after policy at disability advocacy group PWD Australia, being head of community at Out For Australia, and running operations at racial and economic justice org Democracy in Colour. They’d also describe themselves as vivacious and gregarious, with a bit of a mothering streak. 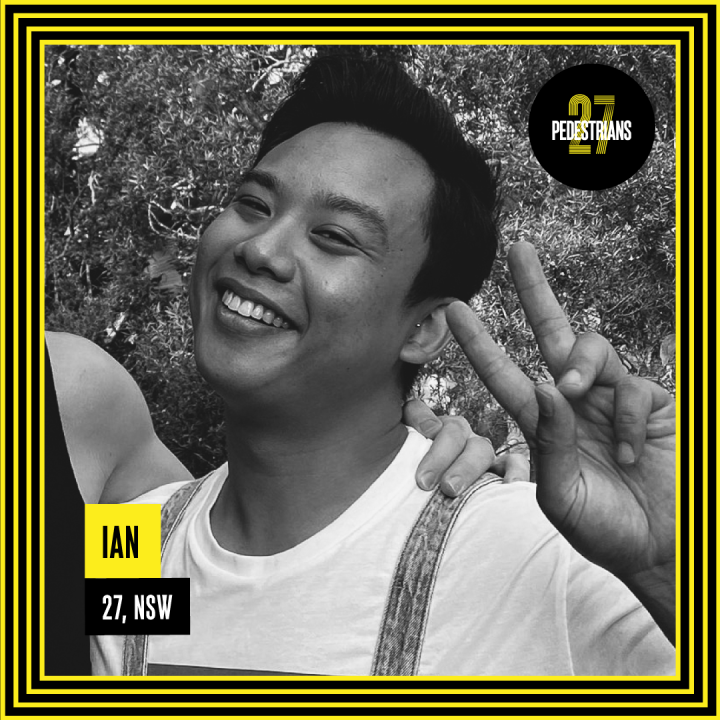 Ian is a communications exec from Sydney who is a “crunchy peanut butter enthusiast”. He’s gay, he’s Catholic, and he’s working to navigate those two sometimes opposing identities. His Instagram bio also reads “memoirs of a potato”, which is iconic and needs to be on a book someday. 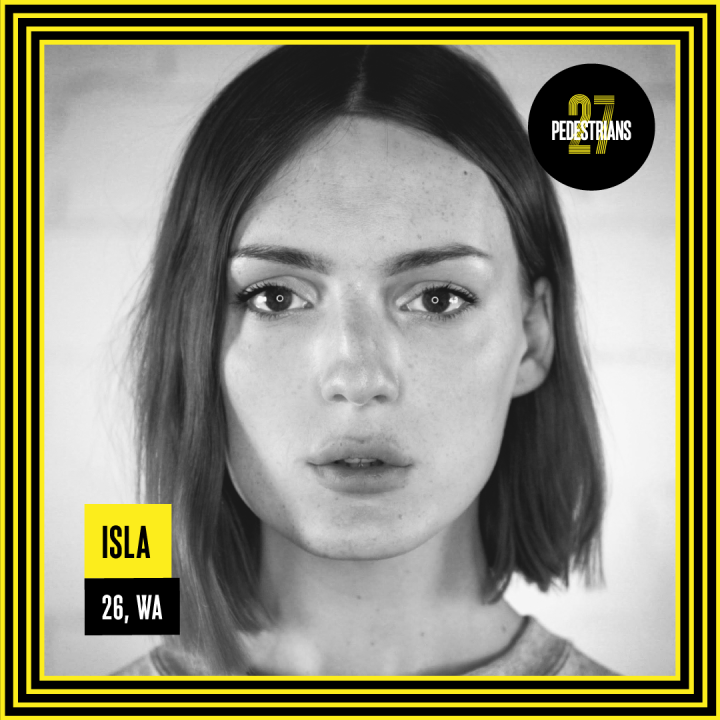 Isla is a trans woman and YouTuber from Perth with more than 28,000 subscribers. She describes her sexually as “undefined”, and when asked if she believes in aliens, replied: “I am an alien.” 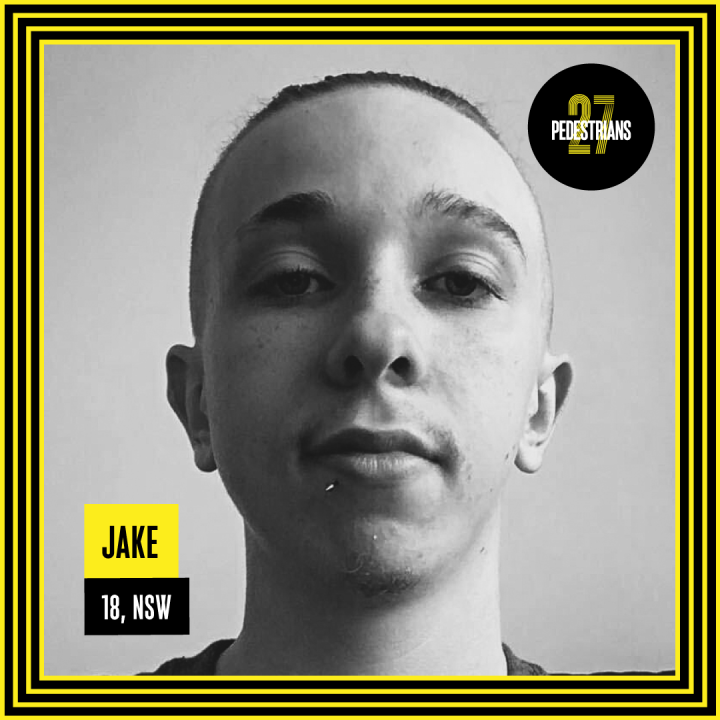 Jake is a self-described “free spirited down right beast” who hails from the Central Coast in NSW. He’s an independent record label owner, and at just 18, he’s the youngest of our 27 Pedestrians. His relationship status, for example? “In love with money.” Cheeky. 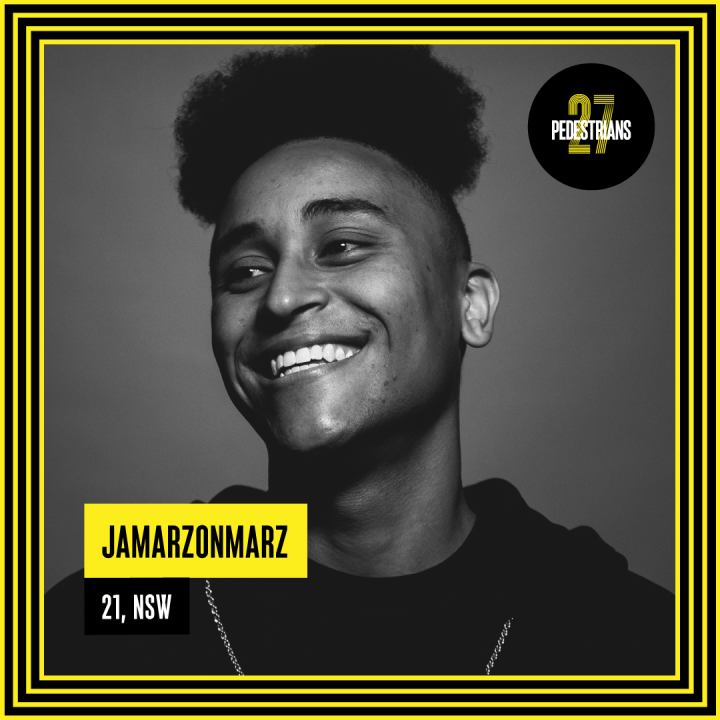 James – also known as JamarzOnMarz – is a musician (rap and saxophone), retail worker and “impulsive twerker” from Orange, NSW. He’s biracial, queer and genderfluid, and explores LGBTQI+ issues through hip-hop. He currently lives in the Blue Mountains but spends enough time at his boyfriend’s place in Sydney that it’s become a second home. Ultimately, he wants to “change the world for future kids” just like him. 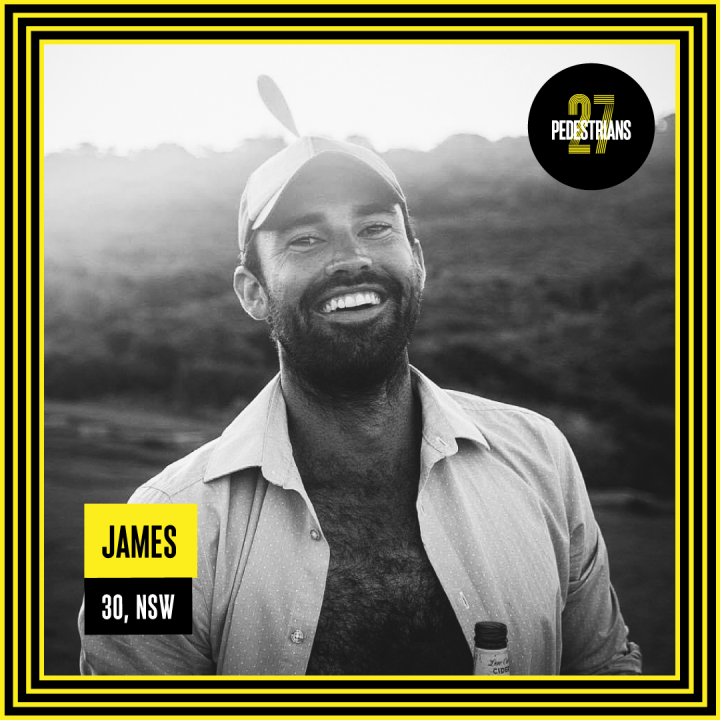 James is a foreman from Sydney who started playing pro-tennis as a teenager, before an injury put an end to that career. He’s determined, hard-working, and usually the friend convincing everyone else to go to the pub. 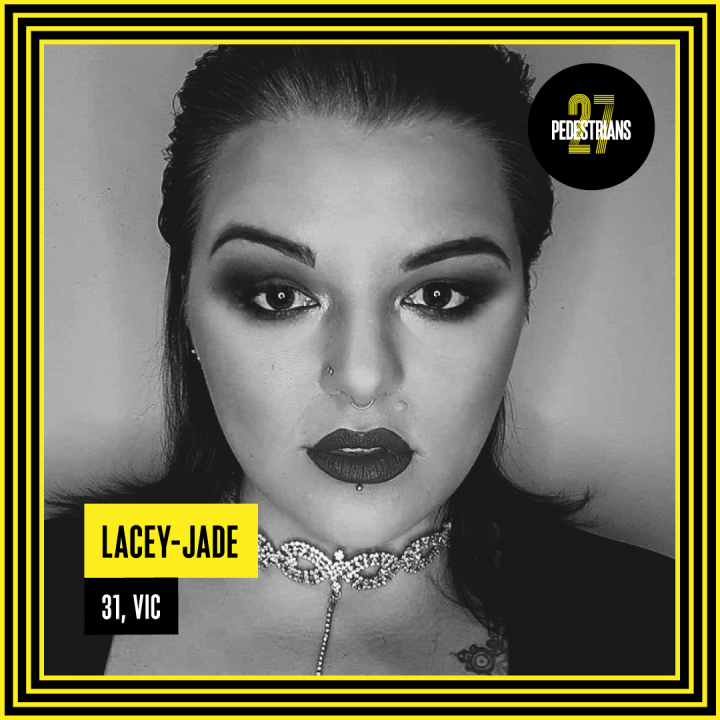 Lacey-Jade is the ultimate 2020 slashie: nurse, model, and social media maven. She’s a plus size model who writes about plus size fashion and experiences, and describes herself as passionate, charismatic and insatiable. 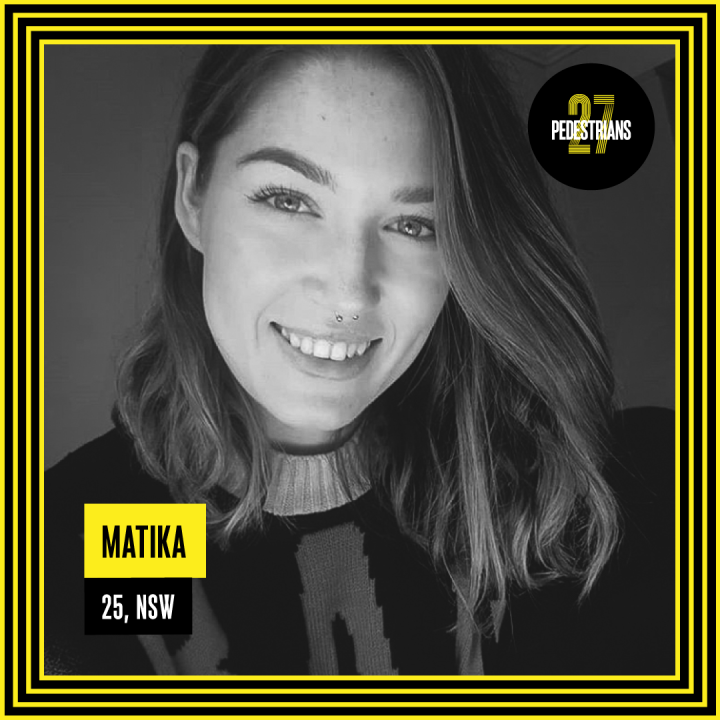 Matika is a queer Indigenous woman, activist and pathways advisor and programs executive. She grew up in regional NSW and is a proud Wiradjuri woman, and now lives in Sydney. She’s also written for PEDESTRIAN.TV about feeling out of place and finding her community, which you can (and should) read here. 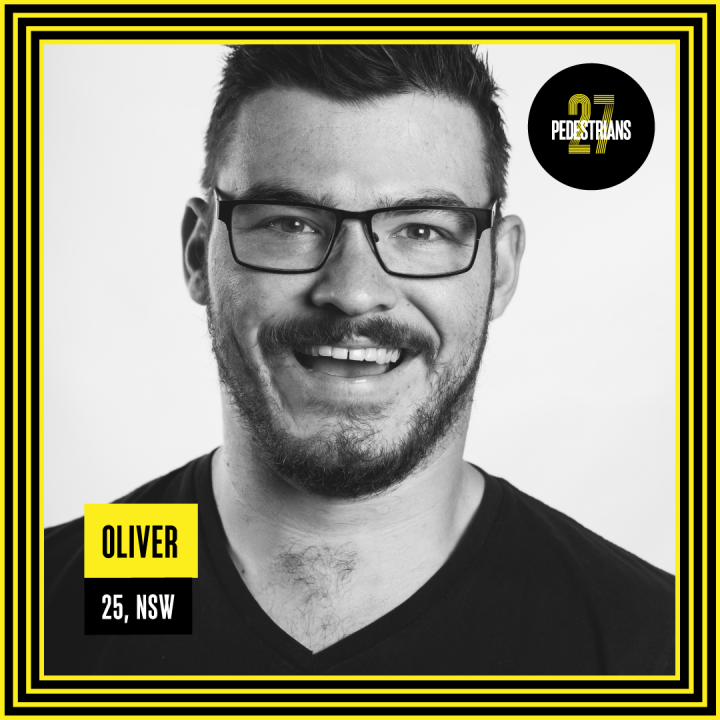 Oliver is a disability advocate, stand-up comedian and podcaster from Albury in NSW who says he’s always “trying to get a laugh”. He has cerebral palsy and describes his political views as leaning left, because “I know the right don’t like me.” If he sounds familiar, that might be because you recently heard him on Dylan Alcott‘s podcast. 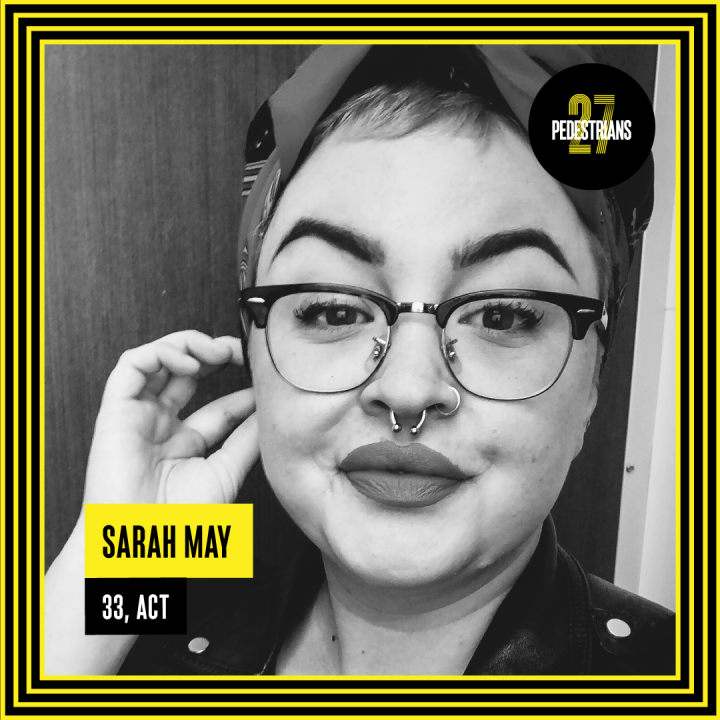 Sarah May is a passionate, outspoken and clumsy non-binary person, who describes herself on Tinder as “fat, bald and weird”.  She recently quit her job in Sydney and moved back to Canberra to focus on her mental health. 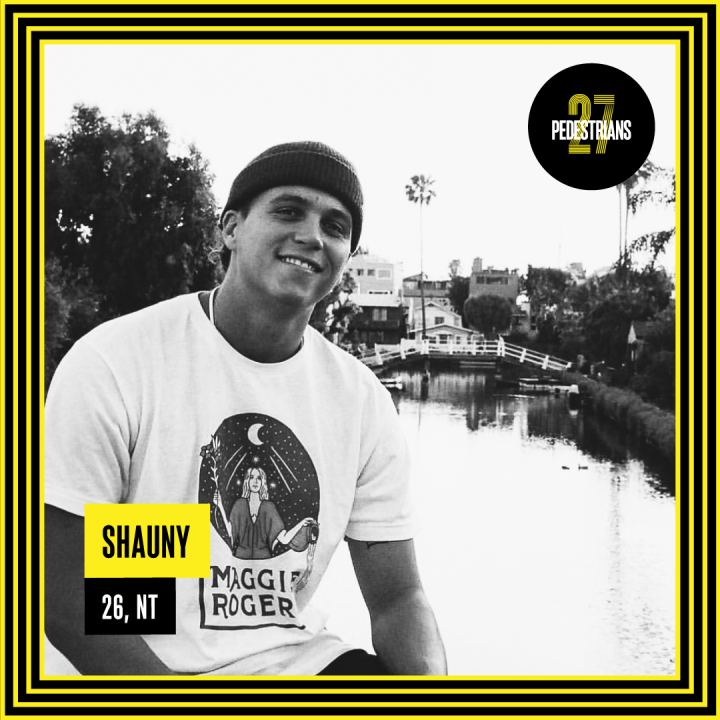 Shauny is a former AFL player who quit the league age 23 to work focus on Indigenous education. Originally from the outskirts of Darwin, he won a scholarship to Melbourne grammar age 13 and was drafted by the Greater Western Sydney Giants a few years later. He played for the Giants, Essendon and the Sydney Swans before leaving the game, and now works for AIME Mentoring, which mentors marginalised kids through high school and university. 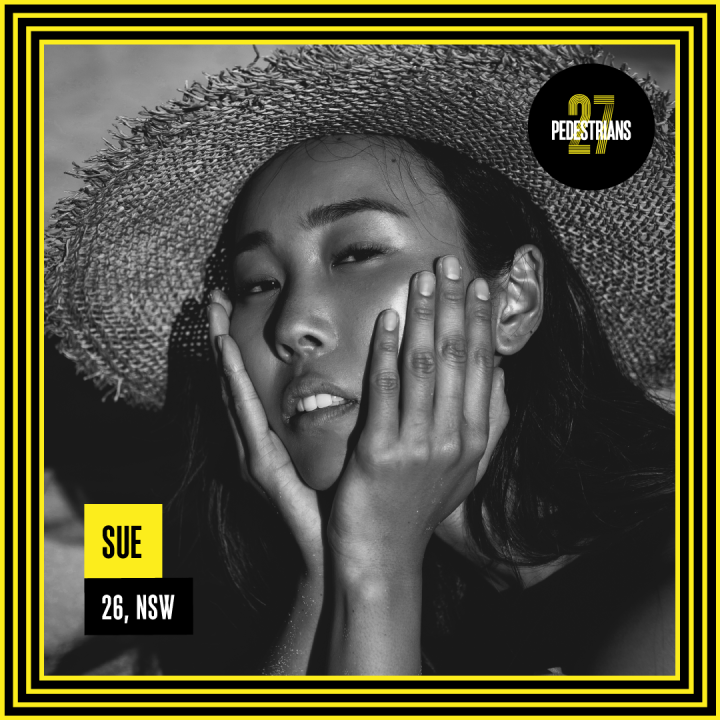 Sue is a lawyer by day and a content creator and writer by night. She’s an intersectional feminist, activist, outdoors enthusiast and K-pop fan. 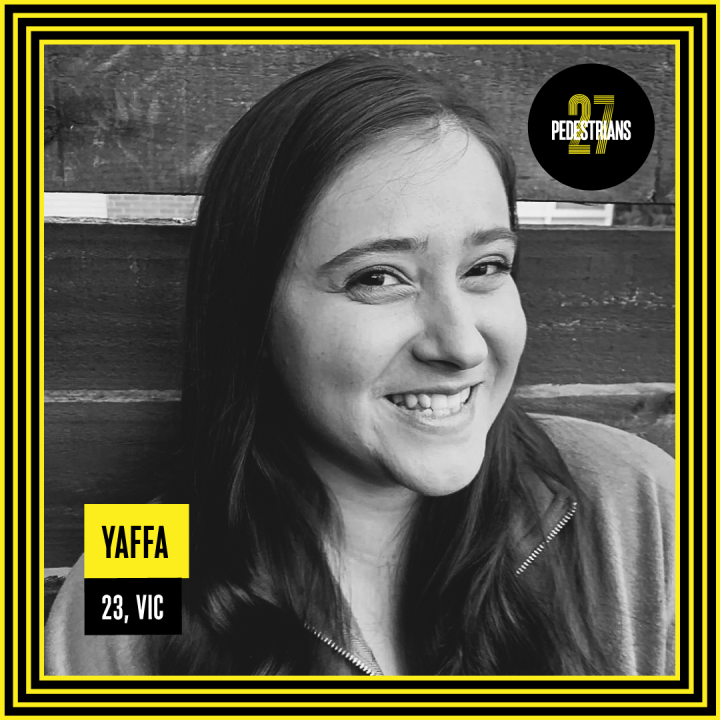 Yaffa is an Orthodox Jew from Melbourne who is studying psychology and works three different jobs: as a Youth Mentor, a Youth Director, and as a Jewish Studies Supports Coordinator. She’s not politically aligned but cites John Lennon‘s anthem, “Power to the People”. 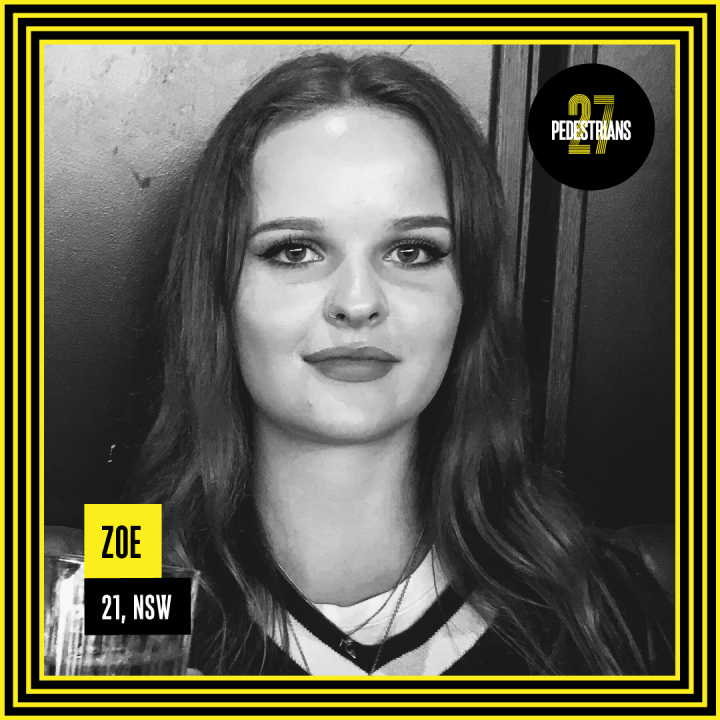 Zoë is a student, artist and identical twin from Sydney. She’s equal parts pensive, silly, vivacious, shameless and artistic, and is looking to find her own space and identity outside of her ‘twin’-ness.