Nothing embodies the strength of the human spirit more than a difficult oceanic voyage. As playwright Eugene O’Neill said, the sea hates a coward, and only the bravest among us can conquer that tempestuous mistress. Whether, like Columbus, you are trying to find a passage to India, or, like the four girls who got swept out to sea on inflatable pool toys, you are just trying to have a good time on schoolies, seafaring is badass.

Like most ideas that people have while they’re on schoolies, this one was not particularly good. The four intrepid sailors were attempting to both max and relax on some inflated unicorns off Victoria‘s Phillip Island when the wind pushed them out into the Western Entrance Current and far, far out of paddling distance back to shore.

Luckily, they were spotted and rescued by fisherman Alex King, who was out looking for squid but instead found some mildly alarmed teenagers (also possibly some squid, for some reason no news outlets have delved into this). 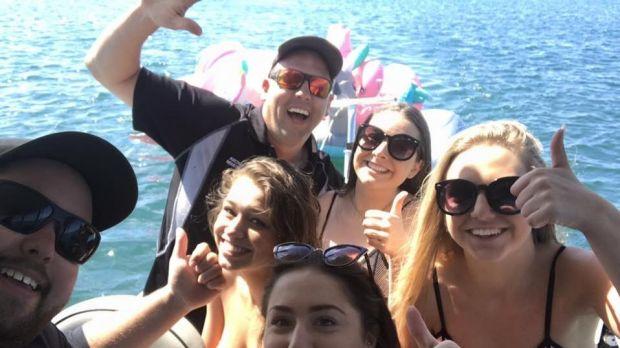 Because ‘The Project‘ works both incredibly fast and in incredibly mysterious ways, they managed to get the girls (Katie, Taylor, Chloe and Haylee) on this evening’s program, mostly to ask “Why?” and then “WHY?” again in a louder voice.

The answer to both of those questions is quite straightforward:

“So we decided to go to the beach one day and go on our new floaties that we bought for schoolies and we just wanted to get a few good Instagram pictures but then it turns out that we drifted all the way over to nearly like the other islands.

“Well we started off, we were just on our phones relaxing and then Hayley put her head back up and realised we were so far away and that’s when Taylor started having a panic attack.”

Apparently, there was a technical obstacle in the way of their return to shore:

“I didn’t bring my phone but these three did so they couldn’t really paddle back to shore.”

Getting picked up wasn’t the end of the ordeal, though:

As someone who has done some extraordinarily dumb things for a good photo, I can only salute this heroic effort. Check out the interview: