The search for missing Belgian backpacker Theo Hayez on the far north coast of NSW has been suspended, according to a statement from NSW Police.

Police, SES volunteers, NSW Surf Lifesaving and the local community have been involved in wide-ranging land, air and sea searches since Hayez was reported missing.

This week, police searched the Cape Byron Lighthouse area, after the Belgian Federal Police arrived in Australia on the weekend.

He was reported missing to police on June 6, when he had failed to return to the Wake Up! hostel for a number of days, and could not be contacted. The hostel has been criticised for failing to report Theo Hayez’ absence, as his checkout date was three days earlier on June 3.

The search for Hayez in the Tallow Beach area was initially suspended on June 22 due to bad weather.

The Commander of the Tweed/Byron Bay Police District, Superintendent Dave Roptell extended his thanks to the local community.

It’s times like this which shows the strength of our community. We want to thank each and every person who assisted and who provided support.

Throughout the entire investigation we have been liaising with the Belgian Federal Police, keeping them informed of our progress and work collaboratively with them. Belgian authorities have been appreciative of the work being undertaken.

We met with Theo’s family today and we send our thoughts to them all, both here in Australia and abroad.

Hayez’ father Laurent made an emotional appeal for information about his son – including access to his WhatsApp records – on June 17, after a crowdfunding account raised the money to fly him to Australia.

As Daily Mail reports, Hayez’ parents, Laurent and Vinciane Delforg, hosted a dinner on Sunday as a thank you to more than a hundred volunteers who have helped with the search.

Their support they bring to us is giving us force to keep faith. Without the support in Belgium and here in Australia, I think we would be on the couch with tissues, crying all the day.

Investigations into the disappearance of Theo Hayez are ongoing.

He is described as being of Caucasian appearance, around 180cm to 190cm tall, with fair hair, a slim build and was wearing a black hoodie and beige pants at the time of his disappearance. 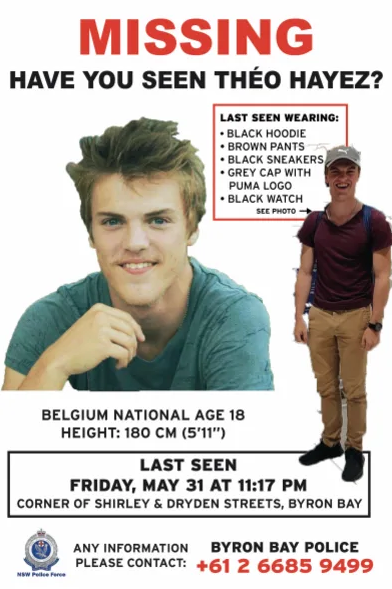 If you have any information that could help police with their investigation, please visit Crimestoppers HERE or call them on 1800 333 000.