Someone In Brissy Claims To Be Making A Netflix Series About The Valley, Netflix Disagrees

Everyone who has lived in Brisbane for any reasonable amount of time reckons they have one particularly sensational story about getting shitfaced in the Valley and, sure, some of them probably are pretty good — but are they good enough to be in a Netflix Original documentary series? The answer is almost very definitely no.

As unlikely as that opportunity ever presenting itself seems, it sure might have looked like streaming giant Netflix had turned its eye towards our humble city’s humble boozing district to anyone that happened to see this Facebook post: 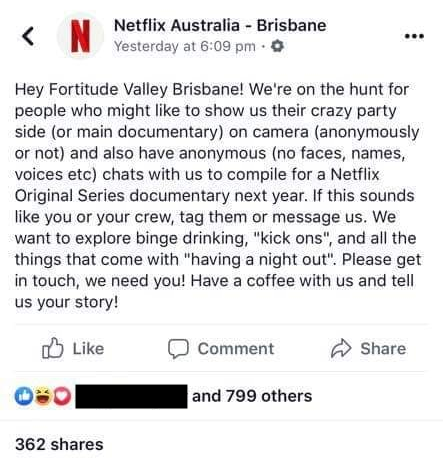 How exciting! Netflix in Brisbane! Of all places! Except the whole thing very quickly started to look a little weird on closer inspection.

Other than the fact that the post could maybe have used some subediting and bit of a punch up, it seems odd that this callout would come from Netflix itself instead of the production company behind the documentary. It also seems strange that Netflix Australia would create a page especially for Brisbane, which they have not done for any other city.

Even more strangely, the page later renamed itself, this time to ‘Netflix Originals’. Was Netflix Originals posting about the various original series and movies put out by Netflix? No. No it was not.

This, combined with this probably-not-up-to-Netflix-standard piece of graphic design, indicated that — just maybe — something here might not have been legit:

After some people started asking questions about what the hell was going on here, the person running the page responded with this handy list: 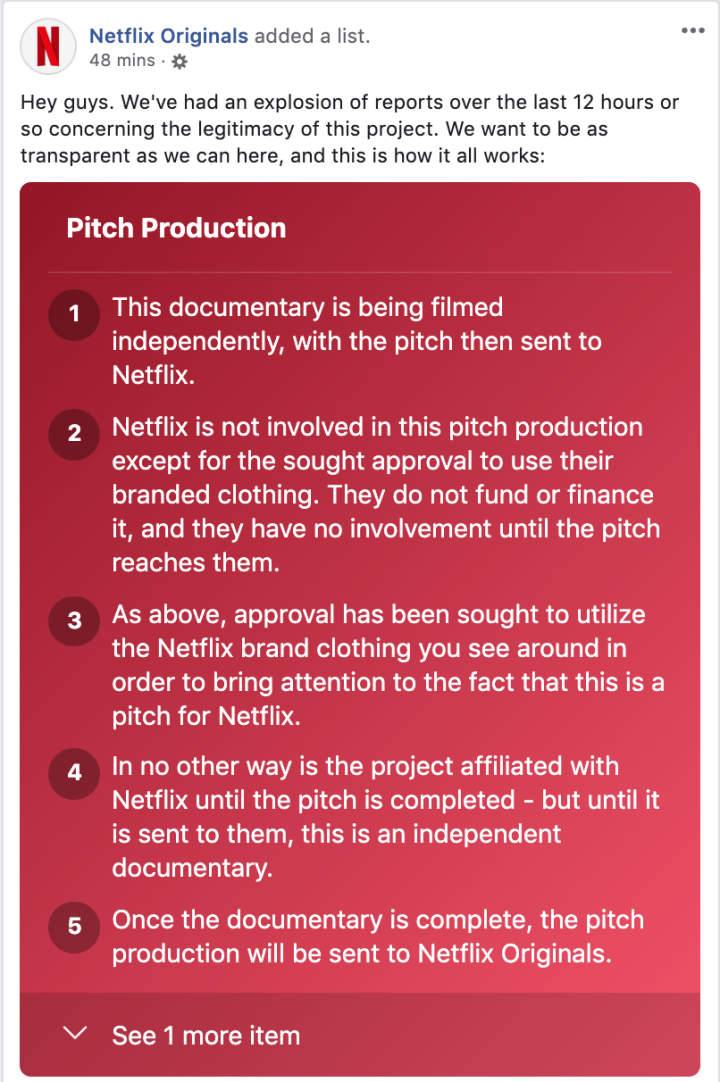 To summarise: Netflix is not at all involved, but they plan to pitch the Valley-centric docuseries Fortitude (incidentally already the name of a British thriller series that only finished airing last year) to Netflix once it is complete.

When we reached out to Netflix ANZ to see what they thought of all this, they told us that they were aware of it but that this was very much not a Netflix undertaking. In response to whether Netflix had given the production permission permission to “utilize … Netflix brand clothing”, as they so claimed, a spokesperson said Netflix was “not involved at any point”.

Asked about why they decided to name the operation ‘Netflix Originals’ when they were not at all affiliated with Netflix Originals, they told P.TV that they were “in talks at the moment about that,” with one option being “to alter it to be a Netflix Independent Production” because of the “huge amount of criticism and issue surrounding the current naming”.

All in all, it seems to have worked on at least a few people, with the page claiming on September 8 that more than 100 people wanted to come chat:

About an hour after I messaged the page, the post ‘explaining’ what the deal is was removed, followed by every other post on the page, followed by the entire account.

Looks like you’re stuck telling your Valley stories to each other whenever you get drunk, soz.