For Your Consideration: The Ultimate Terrible Brisbane Pub Crawl

I would say probably the biggest shared hobby among people that aren’t from Brisbane is telling people from Brisbane how much Brisbane sucks. They love it. They can’t get enough of it. The eyes of Melbournites and Sydneysiders light up with rapturous glee when they get an opportunity to brag to us poor semi-cosmopolitan Queenslanders about their laneways and ?????? respectively (not sure what Sydney has).

But here’s the thing: we know Brisbane sucks. It sucks in a way that rules. This city is small and just kinda shitty in a way that makes everything have a bit of character and makes it very easy to navigate. Everyone has had one good or bad experience at just about every established bar in the city. Everyone in Brisbane carries an impossibly comprehensive map of the city in their head, because it’s dinky enough to accommodate that (the city, not the head).

What better way to celebrate the warm, open mediocrity of Brisbane than with an almost-certainly-lethal pub crawl? Consisting mostly of short walks with a few ferry rides and a train ride thrown in, this’ll take you through some of the very average highlights of our perfectly average city.

1. The breakfast formerly known as the $4 Ric’s brekky

How else could you possibly start something like this? Theoretically, there was a time that Ric’s Bar was definitely cool, but you could go back 10,000 years and whoever you talked to about it would still dismissively tell you that Ric’s used to be cool. The breakfast formerly known as the $4 Ric’s brekky is, in fact, a $6 brekky now. It is still a sausage, some bacon, two fried eggs, a grilled tomato half, and some toast, I’m unsure if it still comes with a side of limp rocket.

It’s just a short walk down the street to Jimmy Rod’s Shave Saloon Bar & Kitchen. Remember how everyone was real big into whiskey, beard wax, and pretending they could ride and service motorbikes for a while there? This is what that looks like if you turned that whole ~look~ into a bar. This is partially on the list because it’s a convenient stop before the next stop, but mostly because this is the sort of thing that would have been laughed out of Melbourne, but finds a welcome home here in the city that time forgot.

3. Brisbane’s much less famous answer to the Opera Bar

Celebrating our weekend by staring at this view. Hello saturday, we are so happy to see you #riverbarandkitchen #views #bythewater #cheers

Before the 2011 floods, this place used to be called The Boardwalk Bar and Bistro, and for $7 on a Sunday you could get a schooner of beer and a pizza the size of a dinner plate. Unfortunately, the floods were not kind to The Boardwalk or its owners, and it is now celeb chef Matt Moran‘s Riverbar and Kitchen. It might be a little bit fancier and might not have the same special on on Sundays (boooo), but it still has the same beautiful view of the river and the Story Bridge. Who needs an Opera House or a Sydney Harbour Bridge? Certainly not us.

I will say this for The Vic: it is definitely nowhere near as terrible as it used to be. A short wander up Charlotte Street will put you within the familiar embrace of The Victory Hotel, which, despite the gussying up it has received, will forever be imprinted in my head as the place with the upstairs carpet that was 50% carpet, 50% vomit. I’m sure most of would have some pretty spectacular memories of this place, if we weren’t too shitfaced to remember anything at the times we were there. 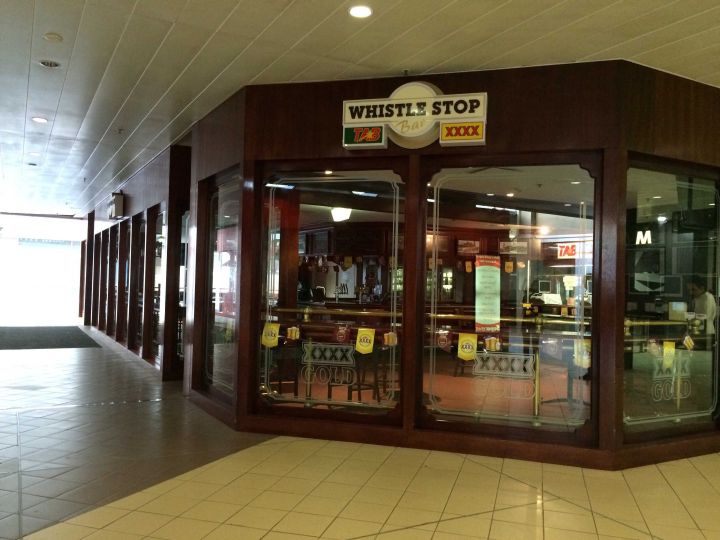 I fucking love the Whistle Stop Bar. Tucked in near Central Station, this little place looks like it has been here for 600 years and Brisbane was just built around it. At some point in recent history they switched out all their XXXX branding for pretend-craft-beer Furphy branding, but the bar itself is still all brass fittings and varnished timber. This place is not designed for groups, or even couples. The majority of seating space is reserved for individuals sitting at the window, staring out contemptuously at the commuters as they huff down a pint. Absolutely glorious.

I think it might have been around 2013 when I accidentally got absolutely fucking daytime smashed at the Irish bar beneath Queen Street Mall and then tried to do all of my Christmas shopping and, although I might not have succeeded, it was still a game-changer for me: you can get drunk and do pretty much whatever (except drive, I must stress this). Mick O’Malley‘s in the Wintergarden is far better than it needs to be and should help emotionally prepare you for the next step.

7. A moment of silence for Jo-Jo’s

In an ideal world, I would have told you to get a white wine or two at Jo-Jo‘s, in true Stefan fashion, but it’s a bloody McDonald’s now, isn’t it. This stop on the pub crawl is not a pub, it is merely a designated time for you to mourn Jo-Jo’s departure from the mall.

At night Jimmy’s on the Mall is the territory of corporate knock-off drinks, but in the afternoon this is the haunt of bored husbands and other people who are sick to death of shopping. There is absolutely nothing spectacular about this bar other than the fact that it is right in the middle of the mall, and a bar.

Very few things in Brisbane are open 24 hours that aren’t servos, but if it so happens that the thing that you want at 3:30 in the morning is pancakes and inexplicable medieval decoration: Pancake Manor has got your back. They serve booze, but at this point in the crawl you are probably much better off sticking to food (there’s a ways to go yet).

Now we’re taking a bit of a casual stroll across the Victoria Bridge to see one of nature’s rarest creations: a rooftop bar that doesn’t feel prohibitively fancy. Before its purchase and renovation around 2013, The Fox Hotel used to be a staple of the ‘I’m broke because I’m at uni but I want to get smashed because I’m at uni’ circuit, largely facilitated by their $2 steaks. Since then, it’s become considerably more upmarket but is still a relatively friendly place to grab a beer and stare out at the skyline.

11. Any port in a storm of tourists and families

South Bank is great if you love paying too much to enjoy food and drink in the company of 10,000 people. It is not great if you don’t love those things. Southbank Beer Garden (note the interesting spelling) is not the worst place in the world, although if you are particularly sensitive to musicians very bad acoustic covers of pub songs, it might feel like it is.

All eyes on the big screen come down and join the fun and see whats new at the bar. #idratherbeatthere #game #fridaynight #footy

It’s time to take a very pleasant CityCat ride from South Bank to beautiful Toowong. I urge you to be careful because by this stage you are probably quite hammered and boats are very easy to fall off. I am not going to try and sell The Royal Exchange to you. Either you are familiar with it and have affection for it despite how it sucks, or you are not familiar with it and you won’t want to go there because it sucks. This place is a favourite for UQ students, who can’t decide what they love doing there more: picking up or throwing up.

Who knows what actual time it will be by the time the ferry gets you to La Dolce Vita from the Regatta, but it is almost definitely time for you to eat some food. This is by no means an endorsement of the food at La Dolce Vita, but it is very definitely an endorsement of the sheer Brisbane-ness of having an Italian restaurant underneath a replica of the Eiffel Tower. What an incredible city.

15. Beer is a four-letter word

Originally I was going to suggest that you try book in for the XXXX Brewery tour, but given the proximity with which it places you to heavy machinery, you might be served better just sticking to the Alehouse. Smashing a few mangoes in the shadow of the neon XXXX sign is a quintessentially Australian experience, even if you can’t see the sign from inside.

The Regatta might be the place that you’re most likely to hook up with a League player, but the Caxton Hotel is where you’re most likely to be glassed by one. The Caxton is just over 150 years old but barely looks a day of it – as in, they’ve done it up so much that you can barely tell that it’s a beautiful heritage pub.

Folks, it’s time to jump on the train at Roma Street and head back into the Valley. Retro’s Cocktail Lounge might not be the shining light on the hill of tackiness was, but it’s definitely carrying the torch for obnoxiously loud music that kinda sucks unless you’re smashed then it rules. After 10pm, the only people in here are completely smashed off their tits, which will include you, by this stage.

‘Ric’s but worse’ is not a great tagline for any bar, so I can see why they haven’t adopted this officially. Depending on your age, the Royal George is just an extension of Ric’s where the music is either much better or much worse.

I have absolutely nothing bad to say about the Beat. The Beat is the treat you earned after a hard slog of going to 18 bars and restaurants (and one instance of standing in a mall eulogising Stefan’s restaurant). Go dance your little pants off. You earned it.

(Note: drink responsibly, drink lots of water, look after your mates, don’t be a menace to staff, etc etc.)