Update: Monday, July 11 — The owner of the heavily-graffitied car in Melbourne’s northern suburbs has broken his silence and it turns out it was a prop for a photo shoot. Sadly it was just as we suspected — and too good to be true.

Northcote local Luke Katmadas told PEDESTRIAN.TV he’d sprayed his own car up for a recent shoot in collaboration with Melbourne model Vish and hadn’t had the time to get it washed before it was spotted last Monday morning by curious neighbours.

He said watching photos of his own car turn into a viral moment after other publications picked up PEDESTRIAN.TV’s original story was surprising. It also made him worry about how many other news stories he’s read have taken off like widlfire in the same way.

“It’s so fine that something attention-grabbing and easily shared gets put on the internet, but seeing a meme quickly become news with no additional facts or research being sourced makes you think about countless other news stories with the same archetype,” Luke said.

The shoot was inspired by a series of (possibly very real) photos of a Lamborghini sporting some revenge graffiti. Definitely not as clean as Luke’s work though.

Luke’s handiwork was easily removed from his car, too. He told me he used a rubber-based paint called “plastidip” which peels off and is fully removed with citrusy goo-remover.

Well there you have it, no jilted lovers in this case but definitely some undeniably good can technique.

Original: Monday July 4 — It’s not often that someone’s experience of fucking around and finding out is put on display for the world to see in the cold light of day. But when it does happen my God is it gorgeous.

One bloke in Melbourne’s inner north has awoken this morning to his Find Out era after his car was slapped with a spray paint job that screams “2000s coming-of-age film”. 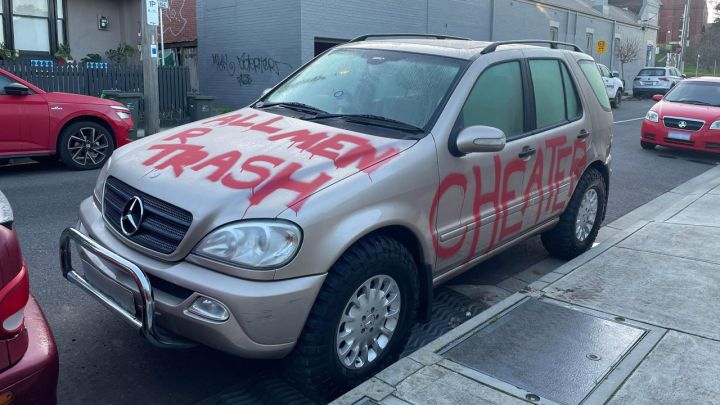 A friend of mine spied the car when she headed out this morning in Northcote and immediately lit up the group chat with photos. An absolute treasure to wake up to at the start of the week — though maybe not for the car’s owner.

Is it a jilted ex wanting to make it known that they know they were cheated on? Is it an art piece? Is it a prop for a local indie film? Is it guerilla marketing for a reboot of Mean Girls?

Who’s to say but my God I hope it’s the former. Please let this be an incredible display of someone being so phenomenally off it that they’ve gone and spray-painted their rage thoughts on their former lover’s car.

The balance here between the neat lettering and the drip of the paint is stunning. It’s a masterpiece.Also, having the time and speed to do three sides of this bloke’s car? Incredible. I can feel the anger radiating from each letter sprayed across the car’s many frosty panels. Good Lord this is delicious.
READ MORE
This TikToker Caught Her BF Cheating Bc She Saw His Fave Meal In A Random Woman’s Brunch Photo

Apparently, the Melbourne bloke who owns the set of wheels eventually appeared in the brisk morning air to see his surprise new paint job. A neighbour joked he’d “pissed off the wrong person” which was met with a chuckle before he jumped in and drove off — hopefully straight to a car wash.