Us common-folk have been given a mere glimpse of Prince Harry and Meghan Markle‘s second bab Lilibet Diana Mountbatten-Windsor this fine week, in a new video she posted to celebrate her 40th birthday.

Per Page Six, the video posted to their foundation’s Insta has a confirmed peek of little Lil with her dad, in a series of framed family photos that are set up on Meghan’s desk.

A post shared by Archewell by Harry and Meghan (@archewell_hm)

The photos are shown in a panning shot as Meghan is setting up a video chat with Melissa McCarthy, to help launch her 40×40 Initiative – where she’s asking 40 of her friends to give 40 minutes of their time to mentor a woman in their lives who are re-entering the workforce after the last 18 months of pandemic disruption.

But back to these photos of Lilibet, which is what we’re all here for on this fine day.

Look, I’m not going to say they’re the clearest pictures of the couple’s youngest, but if you tilt your head and squint you can kinda make out what the blurry picture is. 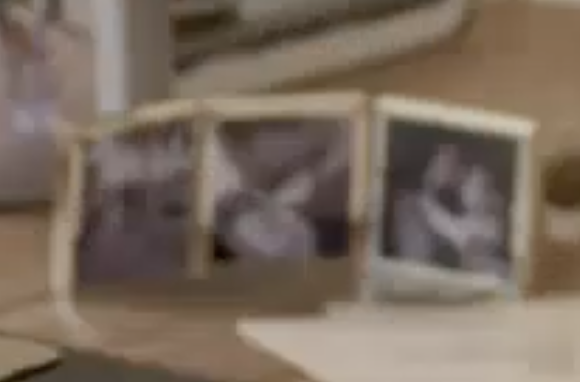 Fucken hell, I feel like I’m looking at an inkblot test or a Magic Eye over here.

But if you look without really looking, you’ll be able to see that the middle photo there is pretty clearly someone going in to kiss a baby’s head, and apparently that’s Harry’s lips going in to give Lilibet’s noggin a big ol’ smooch.

Bless, how sweet. And how great that my eyes are now hurting from concentrating on this blurry shot for too long trying to figure out what exactly I’m looking at here.

The photo of Lilibet isn’t the only treat we’re given in the video, with an excellent blooper at the end of the vid showing Harry juggling and tripping over outside the window in an effort to distract Meghan and Melissa while they’re trying to film.

Full credit to that Big Dad Energy, love that.