We do love ourselves some Grill’d, just about everyone does these days. But the “healthy” burger company is finding itself copping the brunt of yet another batch of hot water.

The steamed ham emporium (it’s really more of an Albany expression) has felt the backhand of the Advertising Standards Bureau over a series of in-store advertisements that customers complained were offensive.

If you’ve frequented one of the franchises for a solid burg and some seasoned chips in the past few months, you would’ve noticed that the company has been pushing their recently introduced range of schnitzel burgers.

The in-store posters spruiked the new product as being “The Good Schnitzel.” Except certain letters in schnitzel were coloured in black, making it look more like “THE GOOD ScHnITzel,” if ya catch their drift.

Czech it out for yourselves. 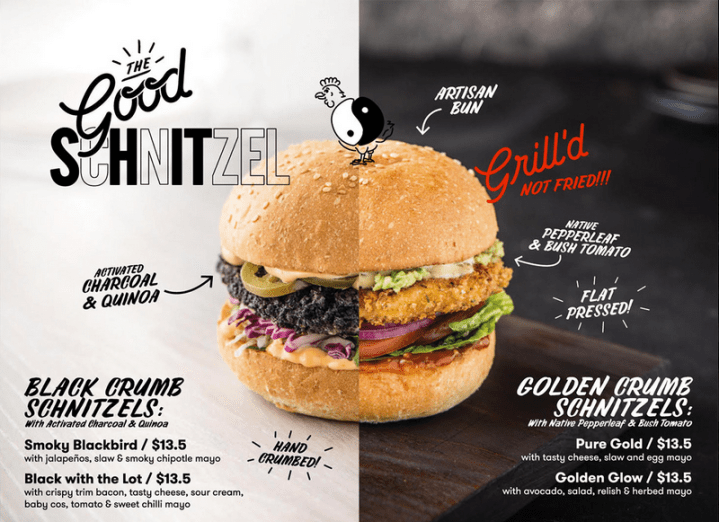 It’s pushing a couple of lines, sure. But on the other hand they’re printing s-bombs uncensored in most major metro newspapers nowadays, so who really cares right?

As it turns out, someone was thinking of the children, and complaints rang in.

The ASB took a look at the case, and ruled that Grill’d must remove the signs, due to the fact that the word ‘shit’ doesn’t have much relevance to the actual product.

“The Board acknowledged that the word, ‘shit’ is part of the common Australian vernacular and most people would not find the word to be strong or obscene.”

“The Board noted, however, that the use of the word, ‘SHIT’ in this instance has no relevance to the advertised product and considered that its prominent display within areas popular with families amounts to a depiction of language which is not appropriate in the circumstances.”

Grill’d, for their part, reject the notion that the signs are offensive and pleaded the fifth in regards to any negative customer feedback or complaints.

“They are internal posters within Grill’d restaurants and we do not believe it is overtly offensive and we have received (excluding this example) not a single complaint from our thousands of customers we serve each week.”

However, they did flag their intention to comply with the board’s ruling by removing the signs from the select stores that have been displaying them.

“Grill’d have complied with this request and those restaurants to which this applies have been instructed to remove these items with immediate effect.”