George Christensen is doubling down on his real tough guy Facebook post even as Malcolm Turnbull has denounced it being “very inappropriate” (yeah, no shit mate).

He fronted media this morning and refused to apologise for a photo he posted with a gun literal days after 17 people died in one of the worst mass shootings in U.S. history.

If you somehow still haven’t seen it, here it is: 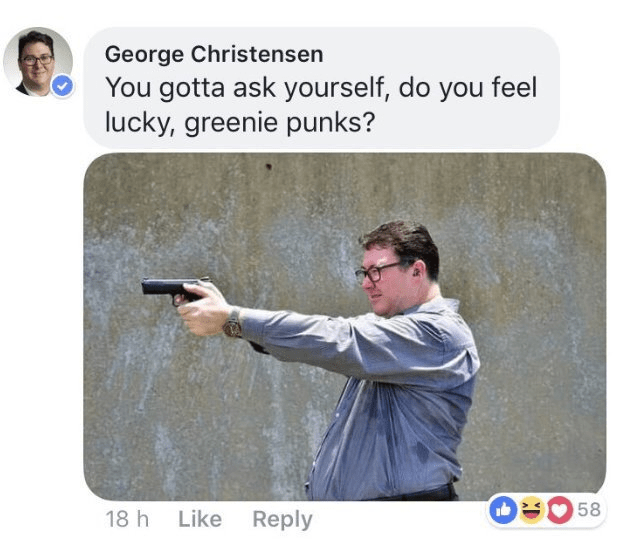 It has since been deleted, which Turnbull told 3AW this morning was after someone got George on the blower to tell him what a colossal fuck-up he’d made.

“He took it down after he was spoken to about it,” said Turnbull. “There’s been a referral to the Australian Federal Police, I checked on the way in and I gather they’re still evaluating the referral.”

That someone turned out to be Nationals Senate leader Nigel Scullion, according to Christensen himself.

“I’m not going to be moralised to by these extreme Greens who put the livelihoods, safety and lives of other people at risk,” he told media this morning. “They’re the ones doing real harm. That’s not a joke with the Greens. It’s real.”

Christensen – a far right Liberal Nationals member best known for being anti-same sex marriage, pro-guns, and once appearing on a white nationalist podcast – also took aim at Greens leader Richard Di Natale and Senator Sarah Hanson-Young on his Facebook page, after they called for him to be sacked.

I have reported George Christensen’s disgraceful post to the AFP and have asked Malcolm Turnbull to instruct him to take it down and apologise. 17 kids gunned down in cold blood and he thinks this is ok? He’s not fit to be an mp.

A Member of Parliament inciting violence against a group of voters should be a sackable offence. If the leader of the Nationals had any class he’d sack him. https://t.co/w2zlo3JdTI

He told his followers to “enjoy the snowflake outrage” alongside an almost decade-old meme.

Christensen’s intensely lame post has been referred to both Queensland Police and the AFP, who are investigating. We’ll keep you updated if this has any consequences on Christensen’s highly paid ministerial role.