Just like Flo Rida used to randomly appear on pop songs in the 2010s, the rapper has now randomly appeared at the Eurovision song contest, baffling viewers.

Flo Rida randomly joined Senhit to represent San Marino at this year’s Eurovision, hosted by the Netherlands. Eurovision is still currently airing in Aus, so if you don’t want spoilers don’t read ahead.

The duo were the final show-stopping performance at Eurovision, and while many people enjoyed the song, they were also confused about why TF Flo Rida was involved.

Flo Rida performing for San Marino in #Eurovision like pic.twitter.com/7lDhYVRmcf

Flo Rida waving the San Marino flag in the green room is at the top of the list of things I never thought I’d see #Eurovision pic.twitter.com/Z79eviRKuV

flo rida on insta live whilst competing in the eurovision is the biggest fever dream ever #Eurovision pic.twitter.com/TWIZkIQfrX

Having Flo Rida, one of the most influential rappers who has worked with the biggest stars in the world representing San Marino, a tiny country with a population of 30,000 inhabitants GIVES ME LIFE.

However, I think the best part of Flo Rida being in Eurovision was that he came all this way…to only place 22nd overall.

Now that is the face of disappointment.

Remember how Flo Rida kind of dropped off the face of the earth for a while? Well, it must’ve all been an elaborate PR stunt to re-emerge at Eurovision and blow the socks off everyone who thought he was gone for good.

My god, I love that man.

So aside from San Marino and Flo Rida how did the rest of Europe go (and Australia lol)???

“We just want to say, to the whole of Europe and to the whole world, rock and roll never dies!” the band’s lead singer said after the win.

Our 12 points from the public vote went to Icelandic band Daði og Gagnamagnið and their song “10 Years”.

Unfortunately, Australia’s Montaigne got knocked out of the competition during the semi-finals. But don’t worry, it’s not as embarrassing as the UK getting zero points from both the public and the juries. 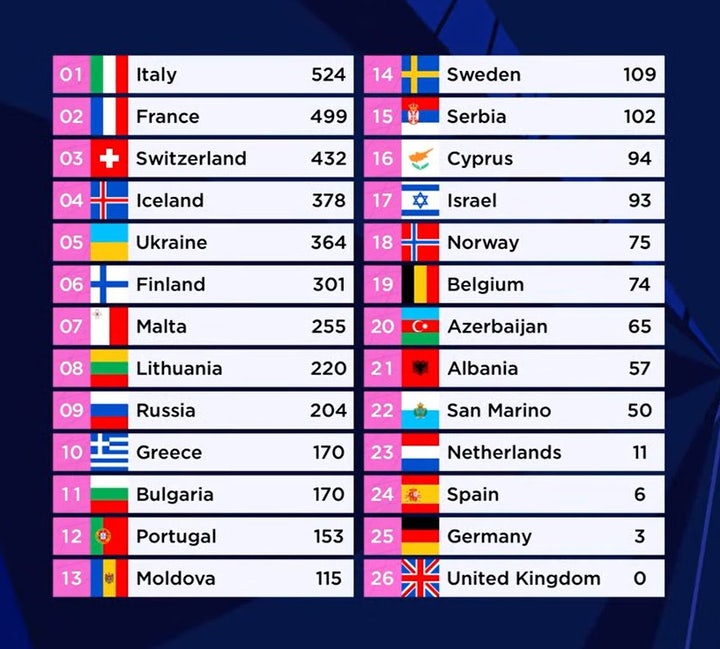