Cranberry Juice Companies Are Telling Porkies About Their UTI-Fixin’ Powers

I’m praying to the Urinary Tract Gods that you’re not suffering from an infection right now, cause I’ve got some news that’s sure to add some fire to the sting. 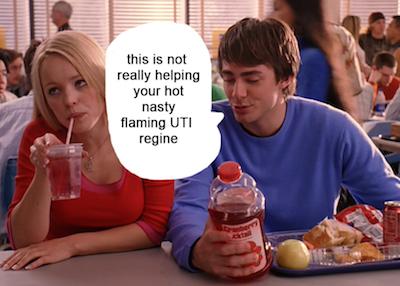 The juicy revelation developed after a new “landmark” study – one that concluded “cranberries can be a nutritional approach to reducing symptomatic [urinary tract infections]” – was revealed as being funded by Ocean Spray, one of the largest cranberry juice manufacturers in the world. Not exactly an unbiased study, me thinks.

So how do they get away with making these health claims? As Vox reports, they broadened the definition of what a UTI is, the cheeky bastards.

They made sure the study looked legit: It appeared in the American Journal of Clinical Nutrition, involved nearly 400 women at 18 clinical sites throughout the US and was randomised, double-blind and placebo-controlled.

Instead of looking at the urine test that finds higher-than-normal levels of bacteria, they focused their findings on women who simply complained of UTI symptoms and didn’t actually have a positive urine culture.

Moral of the story is, always check who commissions scientific studies, and if you wake up tomorrow with a blazing gine, skip the mad dash to the juice aisle and replenish with H20 instead.