Game of Thrones ended, and more than a few people are shitty about it. That’s ok, various fandoms have been aggrieved by less-than-desirable series finales before. But the level of vitriol directed at the crew behind Thrones‘ eighth and final season is really something else. So much so that some bloke in the US has gone so far as to hire a bloody plane to air his grievances way up high in the sky.

The story goes that a few weeks into the final season, a man by the name of Ryan Geddes from Seattle was so annoyed by GoT‘s final season direction that he put together a GoFundMe page to raise the cash necessary to hire a plane that would fly a banner over downtown Seattle demanding an entire rewrite of the season.

Lo and behold, the crowdfunding campaign reached its target of US$695, and a couple of days ago, for around 30 minutes, a light plane circled the city hauling a banner that read “SOMEONE REWRITE GAME OF THRONES SEASON 8 PLZ.“

someone in seattle paid for a plane to fly around with a banner that says “someone rewrite game of thrones season 8 plz” pic.twitter.com/j0wUO8fAws

Cop the zoom in of it. There’s no denying it: That’s what the banner says. 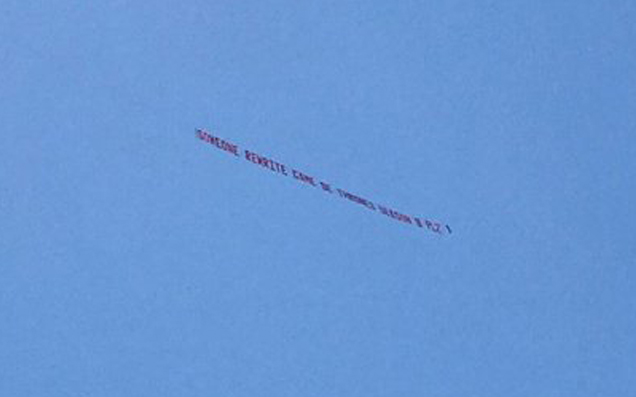 Speaking to The Hollywood Reporter, Geddes explained that the idea initially began as a quiet joke amongst mates, but angry fans with money quickly caught onto the campaign and gave it the juice it needed to get it over the line.

I made this just to send to a couple friends as a joke, not really thinking it would go anywhere, and then we hit our limit.

[Seeing the banner flying was] a thousand times funnier than I thought it would be.

The GoFundMe campaign raised exactly the amount required to get the banner up off the ground. Initially Geddes asserted that any additional funds above the target would go to flying subsequent banners carrying messages such as “WHY DID YOU PUT TREBUCHETS IN FRONT OF WINTERFELL,” or “IF BRAN NO LONGER HAS JURISDICTION OVER THE NIGHTS WATCH WHY IS SANSA ENFORCING JON’S BANISHMENT,” or even “DID THEY COSTUME EURON GREYJOY IN THE ZARA CLEARANCE AISLE?“

Now, however, he’s encouraging people still fuming over the end of the series and willing to put their money where their mouths are to consider donating to Emilia Clarke‘s charity for young brain injury survivors Same You instead.

As disappointing as the lazy writing and rushed conclusions of the last season of Game of Thrones have been, even more disappointing is the lack of resources for survivors of strokes and brain injuries. So I would encourage any aggrieved fans who want to send a message to HBO to go and donate money to Emilia Clarke’s charity at sameyou.org. If I can use my 15 minutes of stupid internet fame for good, I’d like to do that.

Not a bad idea at all, really.