We all know Rick & Morty is a layered show, but it turns out that Justin Roiland‘s dumbass mind is hugely influenced by his own dumbass actions.

Case in point, the co-creator of the show lifted the lid on one of the more ridiculous and out-there gags the show has put to air thus fair in its relatively short lifetime, and it turns out it merely mimics something Roiland did in real life.

A sound scheme and, as it turns out, one that Roiland actually tried to run in real life.

Roiland really did purchase a stack of the limited edition Zelda-branded 3DS units back in the day with the intent of flipping them down the road at an inflated price.

Lo and behold, there’s now one of them up for grabs for a remarkably inflated price.

READ MORE
Christ Almighty, 'Rick And Morty' Has Been Renewed For 70 More Episodes

Roiland reportedly swooped on the consoles at a Walmart mere days before the original Rick & Morty pilot went to air – a Tumblr user claiming to be a close friend previously asserted he has “a guest room full” of them – and held them to some sort of demented ransom for years, planning to offload them at a later date.

Online marketplace Witchsy listed one of the consoles, complete with hand-drawn figures from Roiland on the box, for a whopping US$1,000. Far about the $230 that Rick thought he could flip them for. 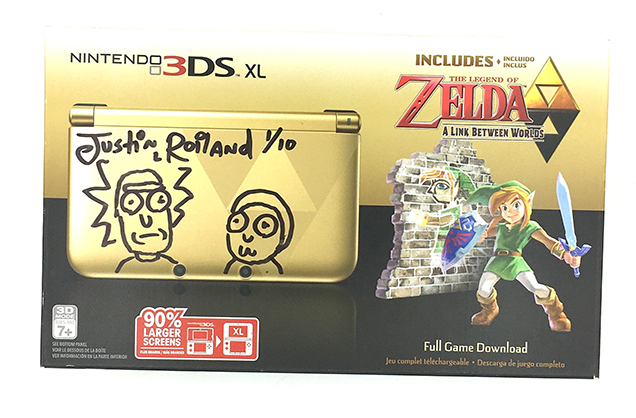 A text message from Roiland to Witchsy co-founder Kate Dwyer, obtained and published by Vice, explains the whole scheme in a bit more detail.

OK, so here’s what’s important re: the 3DS systems. All the stuff Rick says in that scene in the episode was actually true. My plan was to sell them off here and there over the years but I just had so many that I still have them. It’s also important to know that I felt bad after I bought them all so I went and purchased 15 2DS systems and a bunch of games and donated them to the children’s hospital of Los Angeles. I became part of the problem that day. I became a scalper. CHA-CHING.

So there you bloody go.

The product listing on Witchsy also stands by this as a true thing, with a promise to provide some sort of certificate of authenticity to whoever purchased it.

Here is a Zelda Nintendo DS Signed by Justin Roiland with an original drawing.  This is actually one of the Nintendos that Justin Roiland purchased himself from Walmart and which then inspired Rick’s joke in episode Total Rickall.

Justin said he’d provide some sort of certificate of authenticity with it but who knows that dude is busy and certificate might just be drawn on a dominos napkin.

This is an actually limited edition Zelda Nintendo. Frame the box and play the game? Or maybe just seal in a vault as invaluable nerd collector’s item?

All that’s left to ponder now is: Will some giant nerd superfan assault enact pure chaos to get their hands on the other consoles, like the szechuan sauce debacle of yore?