PEDESTRIAN.TV has teamed up with Disney for the release of Marvel Studios' Doctor Strange in the Multiverse of Madness.

If you’re into the Marvel Cinematic Universe, you’ve likely tried to bend your brain around the concept of the multiverse. Not got a good grasp on it? You’re in luck. The only way I know how to describe it is in basic terms.

Has anyone ever lobbed the “not everything revolves around you” insult your way? (I’ve certainly copped it once or twice.) That’s basically what the multiverse is. It’s the idea that our universe isn’t the only one, but there’s an infinite amount of others running in parallel to ours, right now.

Still confused? With Doctor Strange in the Multiverse of Madness about to hit cinemas on May 5, you’ll wanna get a handle on this now. Basically, in parallel universes, there can be different versions of all of us. One tiny change in that universe can set the same character off in a very different trajectory. Spider-Man: No Way Home basically cracked the multiverse wide open, with versions from other universes popping into the main one.

Let’s use old mate Dr Strange (Benedict Cumberbatch) as an example. He could (hopefully) come across a bunch of different versions of himself that are wildly different from the dude we all know and love in the upcoming one. We’d love to see these versions:

Before he became Dr Strange the superhero, Stephen Strange was an established neurosurgeon. He got into a car accident that damaged his hands to the point where he was no longer able to operate. And, in an attempt to fix them, goes to get training from the Ancient One (Tilda Swinton) and learns all the fancy magic that thrusts him into this whole new world.

But what if he was never that cavalier Doc? We bet he’d never have been speeding and gotten into that accident. We’d love to see Dr Strange come across a more relaxed version of himself. Maybe he’s a doctor in the sense that he has a PhD in philosophy? And he’s just a happy man who never got mixed up in this world of dark dimensions and fighting baddies. He’s living a quiet life in comfy clothes. He’s married to Christine Palmer (Rachel McAdams) and she’s bringing in the bacon as the ER Doc. Would certainly make our main man question his life choices, hey?

Dr Strange is known for many things; his stylish levitating cape, his powers and, of course, that almighty goatee. What would happen if an alternate-universe Dr Strange was naked from the nose-down? Would he still wield the same power? Would he be distracted by a chill on his chin? We’d love to find out.

My dream would be that it’s a Samson and Delilah situation. And that’s not crazy to suggest. Back in his heyday, Dr Strange was a surgeon with no facial hair. After his accident, he let all his hair grow out and only once he had mastered his magic did he trim it into that neat goatee. Coincidence?

If Dr Strange encounters a goatee-less version of himself in the multiverse, my bet is that a villain convinced him he’d look better without it (because everyone does). And then when he shaves it, he loses his power. Uh oh. Would love to watch the fallout of that.

If you’ve watched the trailer for Doctor Strange in the Multiverse of Madness, it certainly looks as if an evil version of Dr Strange enters the chat.

We hear Baron Mordo (Chiwetel Ejiofor) saying, “I hope you understand, the greatest threat to our universe, is you,” to Dr Strange right before a scene where two Stephens are face-to-face. One looks like a little on the evil said and says, “Things just got out of hand.”

It’s unclear whether it’s the same evil version that appeared in Marvel’s What If…? anthology series. Either way, we wanna see ’em fight.

Have a geeze at the more sinister-looking version, here:

Is this a selfish guess because I miss Tony Stark (Robert Downey Jr.)? Maybe. Do I care? No.

With the infinite realm of possibilities on tap in the multiverse, it’s not out of the question that back when Stephen hurt his hands that, in an alternate universe, instead of training in magic arts, he hits up Stark Industries instead. He was a big-time surgeon who no doubt would have had some connections, so why wouldn’t he go to Tony to build some nifty new hands with fancy tech?

Eagle-eyed fans have spotted Strange sporting a different costume in one of the recent trailers. The other ‘fit and grey streak in his hair resembles a certain Strange version from the comics – Defender Strange. In the comics he led The Defenders, a group of heroes including the Hulk and Namor, but we already have this group in the main universe. Perhaps he’s just a version that’s embracing his Clooney era and got a different tailor? Time will tell. 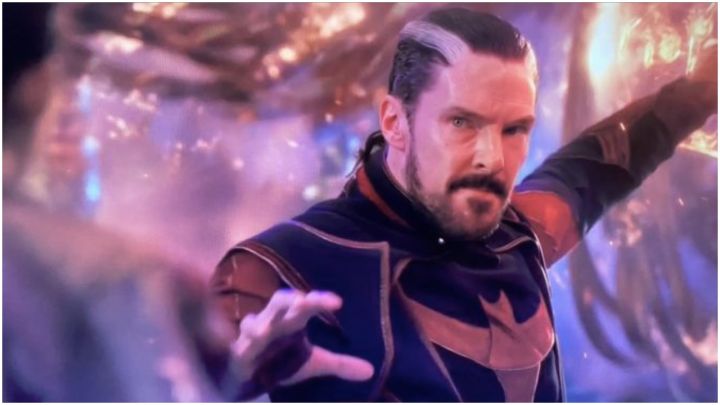 While, sure, some of these guesses may not be the most likely, we’re keen to see Dr Strange traverse through the multiverse and meet some kind of alternate versions of himself.

Marvel Studios’ Doctor Strange in the Multiverse of Madness is in cinemas May 5.

Image: Doctor Strange in the Multiverse of Madness