Here it is, the statement that’s either going to make you love or hate Sydney-based writer and performer Ally Garrett: she has a giant tattoo of Kim Kardashian, her personal hero.

In September last year, Melbourne tattoo artist Clare Hampshire of Hot Copper Studio spent five hours etching Kim’s face – in the style of Guadalupe (religious patron of Mexico) or a 14th century Madonna – on the side of her right thigh. 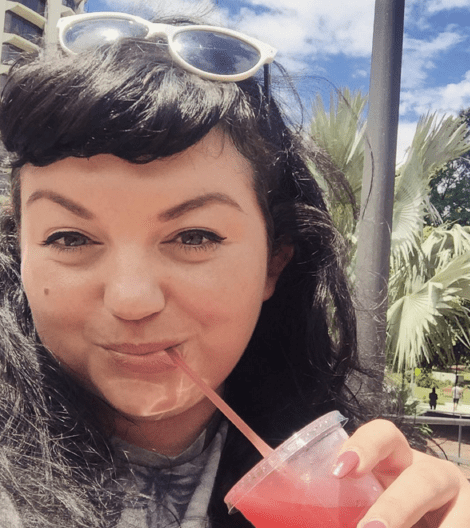 “I was inspired to portray Kim using religious iconography by New York artist Hannah Kunkle, whose exhibit ‘The Passion of Kim Kardashian’ that depicted Kim as religious figures like the Virgin Mary, Joan of Arc and Jesus because she’s the patron saint of pop culture,” Ally told PEDESTRIAN.TV when we hung out with her at artist Scott Dooley’s giant mural of a nude Kimmy K in Sydney’s Chippendale. “That description that resonated with me so much. It’s also kind of ironic to portray her as a virgin when she gets slut-shamed so hard.”

Underneath is a banner that reads “Can I live?!?!”, a ref to the classic Kim-response to cropping daughter North out of a photo on Insta.

Her eyes were closed and I was feeling my look! Can I live?!?!

“This tweet to me, was ultimate Kim Kardashian. Funny, self-aware and unapologetic,” says Ally.

So, why did she want Kim’s face etched on her 4lyf? Check out our interview (and the epic tatt) with Ally HERE:

Why I Got A Giant Kim Kardashian Tattoo

Tfw Kim Kardashian West’s face is on your body. For life.