Vote Homer Simpson Posters Have Been Popping Up All Over Canberra & Honestly, Who Did This?

It’s election time down in Canberra, so naturally the local streets have been flooded with signs from political hopefuls.

Look, it’s an eyesore, but, of course, an extremely necessary eyesore ‘cos folks needa get involved and VOTE VOTE VOTE.

Full disclosure, I’m Sydney-based and generally only tend to follow NSW politics, but the ACT election has popped up on my radar as I’ve noticed a viral post on Reddit that I find fucken’ hilarious, and I reckon you will too.

A Reddit user shared a pic of a poster for *checks notes* candidate Homer Simpson.

“Canberra is having an election soon. I’ve found my guy,” the Reddit user wrote.

The pic features my fave The Simpsons character shouting his iconic phrase, “Woo-Hoo.”

The poster adds, “We hate the Ned Flanders party.”

Canberra is having an election soon. I’ve found my guy. from australia

The post has since gone viral on Reddit’s r/Australia page and has amassed a slew of comments, most of which make hilarious Simpsons references that die-hard stans will love. 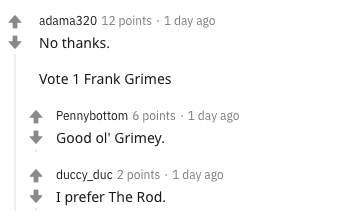 Again, I don’t live in Canberra, but I understand why the user is inclined to vote for Homer, given the state of Australian politics.

READ MORE
Hang On A Fucken’ Minute, Has Roxi Been Marge Simpsoning Her Looks On The Bachelor?

Voting for the ACT election will be spread over three weeks, starting on September 28. More than half of Canberrans are expected to vote early on electronic touchscreens.

Head here for more info on where to vote and how.