Tommy Lee Finally Explained Why He Posted His Monster Peen To IG & Yep, We Assumed That’s Why

CONTENT WARNING: This article contains a peen pic (obvs). Read on at your own peril.

Tommy Lee has clarified why the heck he posted an unsightly pic of his peen on Instagram a few weeks back and just as you all assumed: he was off his absolute titties. And yes, that’s a nod to the fact that his titties were also in the pic, while women routinely have theirs scrubbed from Instagram the second they’re posted. Double standards much, Instagram?

The Mötley Crüe drummer told a crowd during a recent show that he was on a “motherfuking bender” when he shared that.

“A couple of weeks ago, we had like a two-week break off the tour, and I went on a motherfuking bender, bro,” he said.

“I got fucking sideways as fuck and got naked and posted pictures of my dick.”

ICYMI: the 59-year-old muso posted a completely starkers pic and captioned it “Ooooopppsss.”

Ooooopppsss indeed, on his part and on Insta’s because the almighty app fell asleep at the wheel and left the unwanted pic up for hours despite it violating several terms and conditions.

After two – three hours of it (yes, IT) frightening the locals on Insta, the pic was finally removed (praise Jebus!).

For those of you who are here out of sheer curiosity, here’s a cheeky screenshot: 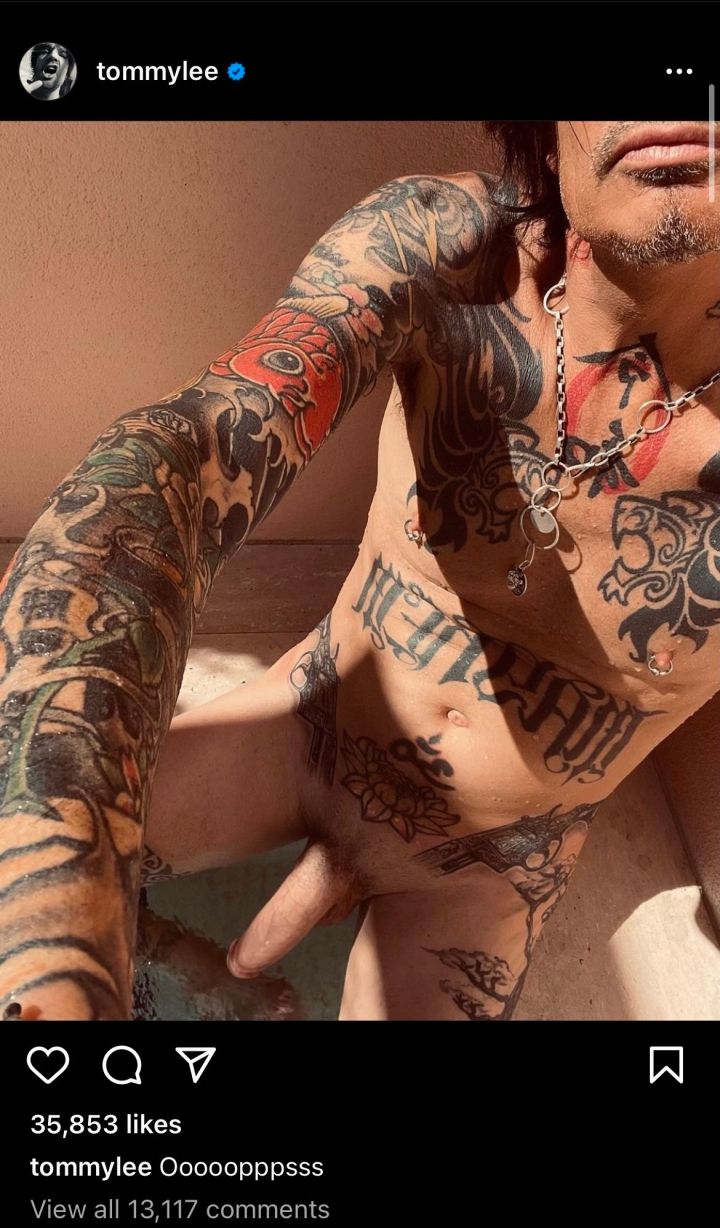 For those of you with no effing clue who Tommy Lee is, he’s one of the founding members of Mötley Crüe and he famously married Pamela Anderson.

Ah yep, that’s the one. The subject of the Disney+ biodick, I mean, biopic series Pam & Tommy. One in the same.

And if you happened to catch the series (not gonna lie, it’s superb!), you’ll know the dude loves to get it out… yuck.

There’s even an iconic scene in the series where Tommy (played by Sebastian Stan) talks to his dick while high on drugs.

Speaking to Entertainment Weekly about the viral scene, showrunner Rob Siegel revealed the idea for the wacky-ass scene “came from Tommy Lee himself.”

“In his memoir Tommyland. His penis is a character in the book,” Seigel revealed.

“Throughout the book, he has these, I presume imaginary but maybe not, exchanges between himself and his dick.”

Although the series is based in reality (well, Pamela Anderson and Tommy Lee’s version of reality, anyway), “we could get away with it because he was high on ecstasy at that time,” Siegel said.

“I felt like that gave us the green light. I like to think that could have actually happened — at least, in his mind,” he added.

“It was fun to write and not terribly hard; imagining what Tommy Lee’s dick would say is pretty fertile material.”