Jason Derulo initially sent the internet into a frenzy over the weekend after posting a straight-up schlong pic to the ‘gram. Like, a hardcode, in-your-face, schlong pic. Schlong city.

I mean, seriously, that thing could poke a bloody eye out.

He then sent users into a further frenzy after acknowledging the… err… anaconda in the room. 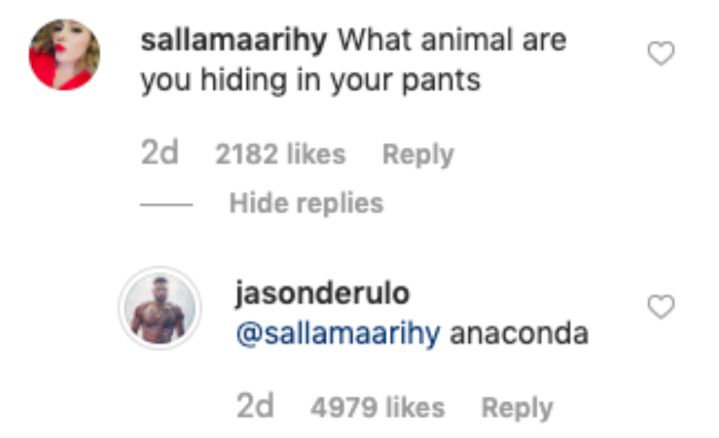 Following speculation that the now-viral Instagram pic was a photoshop job, Derulo reiterated that his manhood is in fact au naturel.

Speaking with TMZ, the muso admitted that he didn’t expect the pic to be as successful as it was. “It was crazy, man. I honestly didn’t feel like that was going to be my most liked picture, when I woke up this morning. I posted the mother-fucker very early.”

When asked if his eggplant was digitally enhanced, Derulo adamantly refuted any photoshop theory. “Photoshop? Photoshop? Don’t make me [show you], eh… there’s not enough women in this area.”

“Just know that us Haitians, we look different.” Well then.

He went on to capitalise on the pic’s virality, posting a “who did it better” image. If you’ve got it, flaunt it, I guess? Good for you Jason Derulo, good for you.

But all good things have to come to an end on social media, because Instagram eventually removed the image. LOL. Still, it lives on in screenshots, as does everything online.