TMZ reports that Culture Kings is pedalling what’s called the “Dreams Vintage T-Shirt” for $36.95, but they’re doing so without his permission which, unlike his viral TikTok vid, is not a vibe.

The dude’s even hired a lawyer to handle the case, and after firing off a takedown notice to the brand, they’ve officially removed the shirt from their site.

Said notice stipulates that Nathan owns the rights to the photograph on the shirt and therefore Culture Kings has no business making bank off it.

As Fleetwood Mac sings in the iconic song, “Players only love you when they’re playing.” 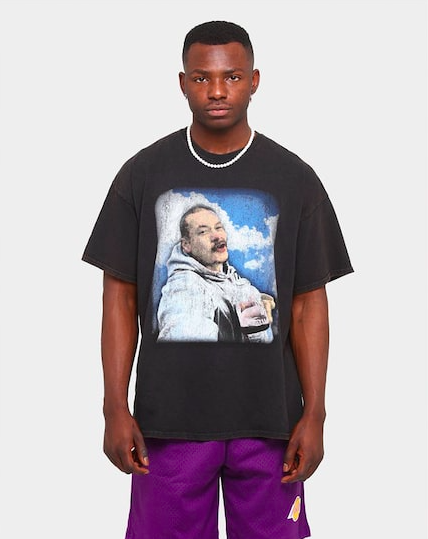 Nathan’s already got a merch line of his own, and his personally designed line of Doggface clothing is selling like hotcakes after launching with UpMerch.com.

The good vibes radiating from the clip have come back to the bloke times three as he’s scored himself a bunch of sick opps since going viral.

First, Fleetwood Mac creator Mick Fleetwood shared his own skateboarding vid in response to the homage, and just yesterday our queen Stevie Nicks did the same (only with rollerblades).

In an interview with TMZ, he revealed donations poured in after viewers learned that he had been living in his RV with no running water. After a few Venmo and Paypal contributions, he was able to park outside his brother’s house in Idaho Falls, but is planning to use the donated money to set up his own place to live.

And that’s not all.

Ocean Spray wanted to thank our vibe king for the epic free promo, so they upgraded his skateboard to a sweet ve-hicle (although I’m almost certain ya boi hasn’t hung up his board for good).

Nathan took to Insta to share the moment the team from Ocean Spray showed up at his caravan’s door with the keys to a new ute, complete with a back tray full of cranberry juice.

Behind the Scenes from my gift from ocean spray today…. love the cranberry red @oceansprayinc