Netflix’s brand spanking new series Sex/Life has become a viral topic of conversation online, but it’s not just the smoking hot cast or the spicy storyline that’s got everyone talking, it’s the question of whether that monster dick is real or fake.

In the viral scene, Aussie actor Adam Demos is seen showering and we cop a full-frontal view of his dick… or do we?

There’s been some back and forth online about whether or not that thing belongs to Adam Demos and if it’s even real. Some fans are certain that it must be a prosthetic dick of some sort because it’s that bloody huge.

Because it’s essential that we get the answers to this pertinent question, I’ve done a full-on investigation where I’ve analysed the evidence from all sides to get to the bottom of this dicky debate.

In a recent interview with Entertainment Weekly, Adam Demos discussed getting his shlong out for the Sex/Life shower scene, insisting that it’s all him.

When asked if he requested a body double for the scene, he said: “I was okay with it because you read the script and know what you’re getting yourself into from the start, so I don’t think you would sign on to a show after reading the scripts and then say no last minute. That doesn’t mean you can’t have discussions about comfort level, which they allowed us to have – and with the intimacy coordinator, so it felt a lot safer.”

Clue #2: The series creator also confirmed it’s all him (sorta)

Series creator Stacy Rukeyser was also asked if the dick we see on Sex/Life belongs to Adam. Collider questioned her about whether they used a body double in the nude scenes and she responded, “No. That’s not a body double. I mean, people usually ask is it real or is it a prosthetic?”

However, when asked if the appendage was fake, she kinda went a bit vague.

“I can tell you what Adam Demos says about it which is, a gentleman never tells,” she said. “So, we are leaving that up to the viewer’s imagination.”

Hm, so that’s certainly thrown some confusion into the mix, hasn’t it?

READ MORE
Everyone’s Talking About The Dick In Sex/Life So I Sussed & Fuck Me, That's A Monster Cock

Radio and podcast host Em Rusciano was doing her own lil investigation on Instagram and two people claiming to know Adam Demos wrote in with the goss.

“Hey Em, I grew up in the same town as Adam Demos (a year below me at school) and I can guarantee you there was no special effects (sic). He is a big boy!!” one DM read.

“My family grew up in Dapto with Adam Demos. My sister asked his bestie if it was his penis and it is,” read another one. 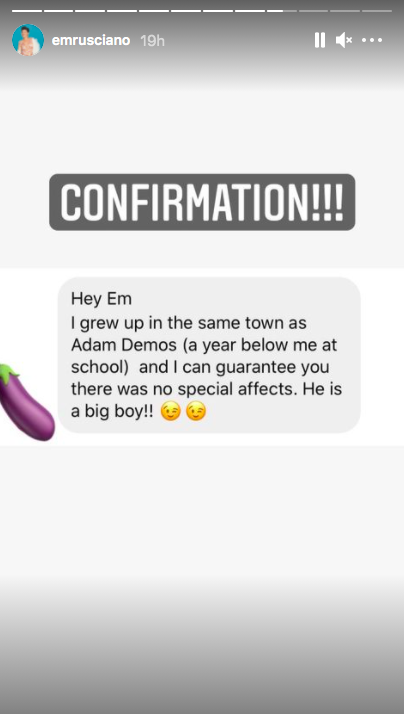 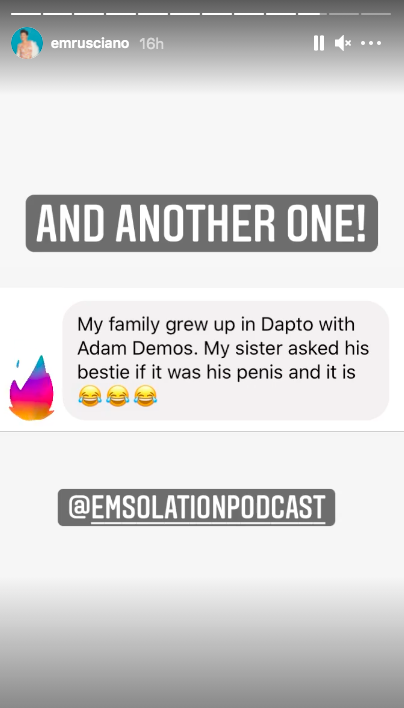 My favourite international goss-miner Deuxmoi has been sharing several tip-offs sent in from her followers this week but TBH, it’s just added more confusion to the mix.

I’ve seen some posts from people claiming to be from Adam Demos’ hometown and insist that the dick is 1000% his, meanwhile I’ve read some from sources who claim that it’s defs a prosthetic, so that’s no help!

Well, we definitely know that there was no body double used in Sex/Life, but whether or not the dick actually belongs to Adam Demos or if it was enhanced using a prosthetic remains to be seen, especially given the series creator’s conflicting message.

I guess we’ll never know! That doesn’t mean we can’t enjoy the scene as we furiously replay it on a cold winter’s night.