When you see the trailer for new action flick Skyscraper, do not, I repeat, do not dismiss it as just another action blockbuster where things go boom and The Rock is portrayed as a literal god.

‘Coz while the movie has all that, it also boasts some incredible feats like 10/10 effects, a unique script and best of all, Neve fucking Campbell.

When I was asked to interview the ’90s scream queen I was over the bloody moon, let me tell ya. The Craft is my favourite movie of ALL time and her role as Sidney Prescott in the Scream films were nothing short of iconic, which is why I found her decision to take on a stock standard Dwayne Johnson film to be extremely odd. 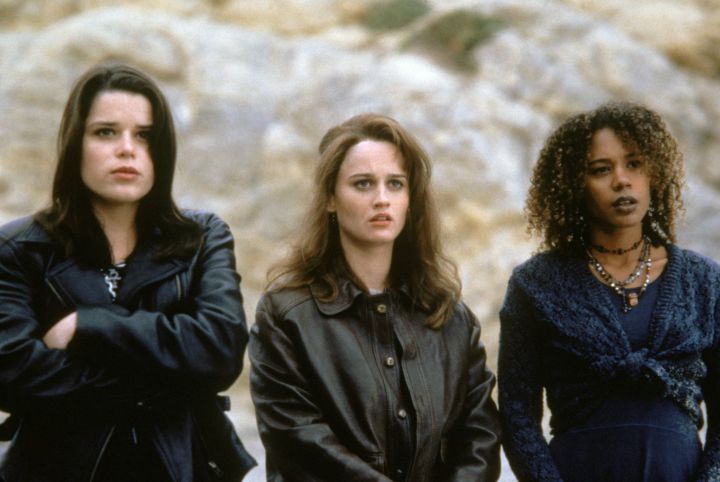 we are the fkn weirdos, mister

But after watching the flick I learned that it isn’t a stock standard Dwayne Johnson film at all, this movie has depth to it and bucks the old fashioned damsel in distress trend that women in film have been cursed with since the dawn of god damn time. Instead, Campbell’s character is an absolute bad ass who holds her own in fight scenes and is instrumental in saving the day.

Here, Neve tells me why she chose this film as her return to mainstream cinema and how her role ties in with the #MeToo movement.

Hey Neve! It’s such an honour to be chatting with you. First of all, what attracted you to the film?

I was excited at the idea of an action movie having a very strong female character who’s not just a damsel in distress but a bad ass and capable and courageous and as strong as her male counterpart. Also, being in a movie with Dwayne Johnson is never a bad thing.

How important do you think it is for movies to portray women that are just as strong if not stronger than the men?

I think it’s so important for films to show that females can be strong and courageous and intelligent and can overcome hardships and be great parents and be successful in their own right and especially in a time like right now with the #MeToo movement where people who are disrespectful are becoming empowered and there’s so many places in the world where there’s definitely not equality still, anywhere really. But that’s changing and there’s certainly a focus on it so for me to get the chance to portray a woman who represents that strength is just amazing.

The movie also showcases the strength of a mother as your character puts herself in danger to protect her kids. As a mum, did you relate to that?

Absolutely. I have two sons, I love them more than anything on earth and the idea of them being in any kind of grave danger is terrifying to me and I would hope that I’d be as courageous as Sarah is in the movie to protect them.

I’m so grateful for a beautiful Mother’s Day today. Taking care of my kids is the most important thing in the world to me, both on screen and off. #Mamabear #SkyscraperMovie

You have some pretty sick fight scenes, did you do your own stunts?

I did do a lot of my own stunts and fight sequences. I was a dancer so I love a good physical challenge. I’d actually always wanted to do an action movie because the idea of getting in shape and learning choreography and martial arts is a lot of fun for me.

Obviously there was a lot of green screen work involved but how much time did you actually spend around fire?

We spent a lot of time around smoke and flames. There was a lot of pyrotechnics on a daily basis, really. We had a large fire crew around so we were obviously very safe but we were working with fire regularly. It got intense and it was hot but every time they said ‘cut’ they’d put out the fire and make sure everything was as cool as possible before they said action again.

The movie is set in Hong Kong but did you get to film there at all?

No, we didn’t shoot there. We shot in Vancouver but we’re here at the moment promoting the film which feels really good. They spent a lot of time getting the cultural aspects of the movie correct from the language to the people to the culture and I think they did a really good job. This is an incredible city, I’ve never been here before. It’s amazing.

What do you hope viewers get from watching the movie?

Of course it’s a blockbuster Dwayne Johnson action film but the heart of it is love and the importance of family and what you’d do if your family were in danger, what extremes you’d go to. And the importance of humanity, really. So although you get the big summer blockbuster, you get a good amount of heart. I also think it’s Dwayne’s greatest performance.

Yeah, I think he’s done some great performances, he does a lot of comedies but there’s a level of drama that he doesn’t always get to do because in this film he’s actually physically impaired which allows him a vulnerability which makes it special as well.

Yes, it definitely added another dimension to the film.

Good, I’m glad you found that. When I read the script I cared about the characters and I can find action films difficult because if I don’t feel that the director has engaged us in the characters and let us know why we should love these people then I don’t care but in this film they did a really great job at establishing who we were as people to an extent where we really want them to be ok in the end.

Skyscraper is in cinemas now.