Miley Cyrus is someone who I would most definitely classify as a creature of chaos but look, I am one too, so I totally relate to her wild antics, such as her latest TikTok vid.

The singer, whose musical catalogue is filled with diss tracks and ballads aimed at her exes, along with lovey-dovey tunes such as ‘Malibu’, has pointed out the fact that her dating history has played out in the media in the spicy vid that’s currently going viral on social media.

In the clip, Miley shares screenshots of a bunch of articles that were written about her romantic life, including Miley calling it quits with Joe Jonas, her fling with Yungblud and rumours that she dated Harry Styles.

The video, which has hers and Kid Laroi’s bop playing in the background, ends with her making out with comedian King Moxu. I told ya, it’s peak chaos and I bloody love it.

This was hilarious and all, but to me, nothing will ever beat that time Miley Cyrus went on The Project and slammed both Liam Hemsworth (her ex-husband) and Cody Simpson (her ex-BF) in their home-fucking-land.

During her appearance on the nighttime telly show, they played a snippet from her ‘Prisoner’ music video, in which a message pops up that reads: “In loving memory of all my exes. Eat shit.” 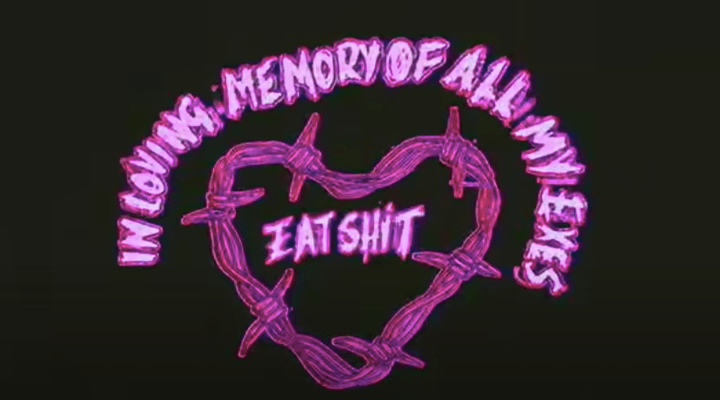 When pressed about the messaging by Lisa Wilkinson, Miley Cyrus responded: “I think life can be painful, and sometimes poking fun and laughing along, I always feel like life is laughing at me and pulling strings.”

She added, “I think that was a way that I was able to fight back at that and poke a little fun at it and create something that was campy and that was the perfect book-end for what we made, you know.”

Watch it here, in all its glory:

Also, just recently, as the #FreeBritney movement kicked off, Miley Cyrus supported her musical colleague by sharing that iconic shot where Britney wears a t-shirt emblazoned with the slogan ‘Dump him’ to her Instagram Story and shaded her exes in the process.

Miley Cyrus captioned the piccy with, “Already did Brit.” Oh yes you did, girl. Yes you did.

Here it is, in case you’ve forgotten: 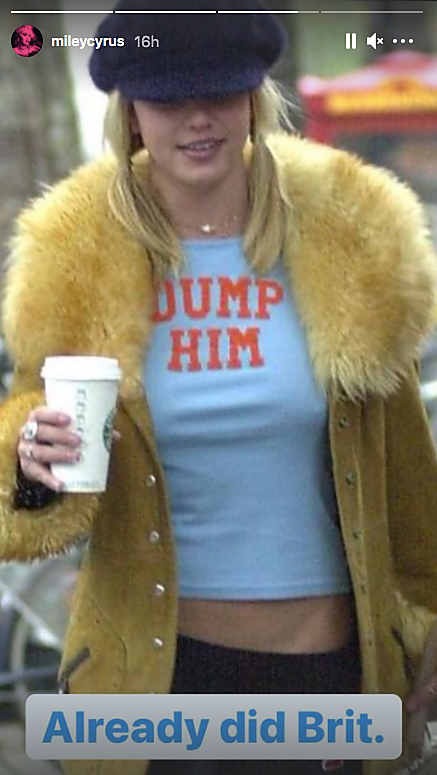