So, Meghan Markle’s Dad Has Been Staging Those Paparazzi Shots All Along

There’s a new scheming minx on the scene and he just so happens to be Meghan Markle‘s father.

Last month, we wrote an article titled ‘BLESS: Meghan Markle’s Dad Was Snapped Reading A Picture Book On Britian‘, cooing over the fact that Thomas Markle was reading up on Great Britain via picture book ‘Images Of Britain’:

literally nothing is more pure than Meghan Markle's dad doing some reading to learn more about england pic.twitter.com/6lgvHg0pHK

But according to an explosive new report by the CIA-level investigative minds over at Daily Mail, apparently these innocent paparazzi shots aren’t all that they seem. Apparently, Mr Markle has been setting up these serendipitous snaps and making a tidy profit of around $180,000AUD.

The DM has allegedly obtained security footage of the 73-year-old former lighting director staging a photo op at an internet cafe with photographer Jeff Rayner.

Yup, that’s the one where he’s seen Googling photos of his daughter and future son-in-law, Prince Harry: 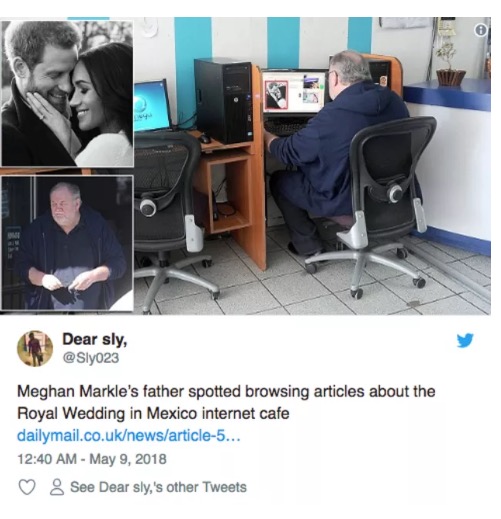 The DM contacted the manager of the internet cafe, Jessica Anaya, who said the photos were staged, with the photographer taking them from less than 6ft away.

“The man and the photographer came in together. It was in the morning,” she said.

“They didn’t stay long, probably about ten minutes and they left together. I thought it was strange that they were taking pictures in here. It’s an unusual place to take pictures.

“He [Mr Markle] had never come here before and I didn’t know who he was. He had a photographer with him. He came in and paid to use the computer, while the other person was taking pictures of him from behind.”

They did a bit more digging (gossip-nugget hungry mongrels they are) and uncovered an elaborate caper involving props and lengthy photoshoots in numerous locations, including this cracker: 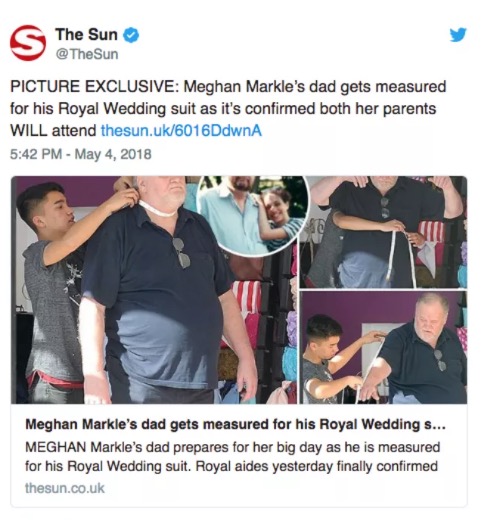 We’re not sure what’s more alarming: the fact that Mr Markle orchestrated this all of this, or the fact that we were all genuinely duped by what, in hindsight, is an obvious set up.

Why, of course an average day in the life of Prince Harry’s future father-in-law is bringing his own book on Britain to Starbucks for a light read over a venti mocha frappuccino! Followed by some light Googling at an internet cafe! Capped off by a visit to a 12-year-old tailor who just so happens to be measuring him for his royal garb in broad daylight!

And all of this, in the same navy coloured polo! Wild!

In all seriousness though, it’ll be interesting to see how the the royals respond to this circus, given their storied history with paparazzi. What makes the situation even worse is that the Palace recently sent letters to newspaper editors requesting that Mr Markle and his family be given privacy.

As someone whose father also does routinely fucked up-level embarrassing things, I feel for Meghan. And genuinely hope this doesn’t put a dampener on the big day this Saturday.