Married At First Sight couple Booka Nile and Brett Helling haven’t received nearly as much screentime as I would’ve liked and the eps have been all about that pain in the ass, Bryce Ruthven and his garbage fire relationship with Melissa Rawson. So it’s hard to know what’s really going down between the muso and her MAFS beau.

But luckily for us curious fans, Booka’s bridesmaid, Madlin, has appeared on the latest episode of the So Dramatic! podcast where she made some damning allegations, including some alleged gross actions displayed by Brett that didn’t make it into the MAFS eps.

Madlin claims that Brett made racist, sexist and homophobic comments to Booka during filming.

She says that at first, she and Booka’s other mates thought Brett was “so beautiful” and “so woke”, even admitting that she had a crush on him herself. Then shortly after, he began exhibiting some “gross” and “disappointing behaviour.”

“The behaviour that was there was like, ‘What is this?'” Madlin told So Dramatic! host, Megan Pustetto. 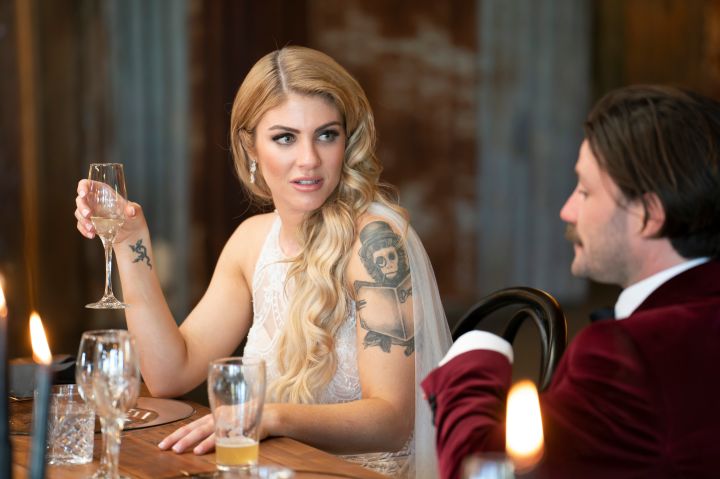 Booka Nile and Brett Helling at their MAFS wedding.

“One thing that was particularly distressing and concerning was the sexist behaviour,” she said, adding that unlike Bryce, Brett was “quite covert about” his alleged sexism.

“He was cracking sexist jokes, like ‘Women can’t drive’,” she said, adding that he had “pathetic humour” and we “haven’t seen the other side of Brett.”

She claimed that Booka told him “no, that’s not funny” whenever he made a sexist joke and he was reportedly “very offended” by her response, which is what led to comments like “you’re too intense,” which we actually did see on-screen, but without context.

Booka explained to him how his jokes contribute to rape culture, but apparently he “wasn’t having it” and “didn’t want to listen to it.” She went on to claim that he also made homophobic jokes at Patrick’s wedding.

But wait, it gets worse. Madlin also claims that Brett Helling wasn’t into Booka Nile from the get go because she “wasn’t Japanese.”

She claimed that he wrote a pros and cons list about Booka and one of the things that he didn’t like about her was that she’s not Japanese as he allegedly fetishises Japanese women.

“We’re so quick to call out people like Bryce and of course, we should, but can we have a look at what else is going on?” Madlin suggested.

She went on to say that Brett’s real behaviour is a primary example of “toxic masculinity” and if only we got to see that side of him on-screen.

Have a listen to the full podcast ep here.