All The Tea Spilled In KUWTK Reunion, From Kris’ #1 Kid To The Scene They Tried To Have Pulled

My fellow Real Housewives stans will be well aware that at the end of every season, the ladies get tizzed up and reunite for what’s known as the Reunion Special where they sit on lush couches and discuss what went down on the show with executive producer, Andy Cohen. Well, now that Keeping Up With The Kardashians is over, they’ve been given the Housewives Reunion treatment and they’ve spilled a bunch of tea to, you guessed it, Andy fucking Cohen about not just the last season, but the entire KUWTK series.

Kylie discussed why she hid her pregnancy

Remember a few years back how everyone was convinced Kylie Jenner was pregnant but no one could confirm it bc she went into hiding, only to later announce the news of Stormi’s birth on YouTube?

Well she discussed that whole scenario in part 1 of the KUWTK reunion.

“I shared so much of my life. I was also really young when I got pregnant and it was just a lot for me, personally,” Kylie said. “I didn’t know how I would bring that to the public, too. I think it was just something I needed to go through by myself.”

Her sis Kendall Jenner also chimed in and said that she reckons Stormi’s happy and peaceful demeanour is probs a result of the fact that her mama had a chill pregnancy, which is noice.

Kris hates being asked which kid is her fave

Throughout KUWTK, the girls would always mock Momager Kris Jenner, saying that Kim Kardashian is clearly her favourite child.

Khloé Kardashian pointed out that this is a sore spot for Kris and it really bugged her on Keeping Up With The Kardashians.

“I think it first started because Kim was the first one that was having these really lucrative deals and Kourtney and I were more so left to the Dash and the Smooch stores,” Khloé recalled. “We knew it was a sensitive topic for my mom. We would almost just, like, do it to screw with her a little bit. Then Kylie came around and we saw there was something there.”

Kylie revealed that her Lip Kit empire wasn’t simply born out of a desire for cashola outside of KUWTK, she says it was an empowering move for her based on her insecurity over her lips which was sparked by an ex.

She says after the unnamed jackass commented on her “small lips,” she started to feel “unkissable.”

“I had an insecurity because this guy said something to me one time,” the Keeping Up With The Kardashians star revealed. “Then I got an obsession with makeup because I would over-line my lips and it just made me feel confident.”

Her fam then suggested that she should name her next Lip Kit after him and fucking LOL.

While she hates being asked which kid is her fave, she was quick to respond to the question of who’s the easiest and who’s the hardest to manage, from a business perspective.

She said Kendall has always been independent and self-sufficient (pure Scorpio energy) so she’s the easiest KUWTK star to work with, while Kourt is the hardest because she loves to say ‘no’ which is some real Olsen Twin shit.

“I don’t want to do things if it’s not something I’m really into doing,” Kourtney explained. “So my answer is ‘no’ to most things, and if it’s going to be ‘yes,’ I want to know everything I’m being asked of.”

Kris Jenner gets 10% of everything

This is a well-known fact that’s been discussed on KUWTK, but it was certainly interesting to hear the kiddos’ perspective on it and basically their opinion is: good fkn on her.

“Our mum is giving us our careers,” Khloé Kardashian insisted of the Keeping Up With The Kardashians founder. “It’s only fair she gets paid for that.”

They’ve tried to have their fam fights pulled before

There’s one part where they discuss whether or not they’ve wanted to have their sibling rows removed from episodes of KUWTK and the general consensus was that as the fight was happening, in their head they’ve decided that the moment won’t be aired, but when time goes on, they ultimately decided to let it happen (or they simply didn’t have a choice).

For example, although they really did not want to air Kim and Kourt’s epic blue in a recent season of Keeping Up With The Kardashians, they had no choice because an E! rep was there that day and saw it happen.

Their mates were dicks to them when they first became famous

When they first launched KUWTK, apparently a lot of Kris’ mates wanted nothing to do with her and Kendall and Kylie were bullied in school over it.

“Don’t you remember having so many haters of our friends?” Kourtney revealed. “Our close friends were such haters and so jealous.”

Kris became “alienated” by her friend group, that is, until they became rich, then folks started crawwwwwling back.

“They really shunned you for a while and then by, like, season three or four, they all now want to be invited to her things,” Khlo recalled.

Kim says that while the sex tape brought them fame, she certainly regrets it

Speaking on the infamous sex tape that launched their careers on KUWTK, Kim says that she reckons they wouldn’t have been nearly as successful without it.

That being said, she does regret taking part and is nervous for the day her kids find it.

“Luckily, I think that so many years have gone on and so many things have happened that it really erases that,” Kim said. “That is something that I have to live with for the rest of my life. That is something that is being held over my head. I try to not live with any regrets, but it’s probably the one thing I wish didn’t exist. If I could erase any of the stupid things I’ve done in life, that’s probably it and it’s more so from being a mom than anything.”

She admitted that she was “so naïve and uneducated” during Caitlyn’s journey.

“I realised that I was not considering what Caitlyn was really feeling at the time, which is that she wanted to be who she is now since she was four years old,” KUWTK mastermind Kris explained.

But now things are a-okay between the exes.

“We’re OK. When I see Caitlyn or talk to Caitlyn, it’s nice, it’s friendly,” Kris concluded. “I think things are really good and I try to keep it that way for my kids.”

The on-off pair, who share three kiddos together, ultimately fell apart due to Scott’s substance abuse issues, according to Kourt, who called it a “dealbreaker.”

Scott basically said that’s fair and admitted that he’s exhibited some “bad behaviour” in the past, which has been well documented on KUWTK, particularly in the earlier seasons.

“I do regret the person that I was for a long time to Kourtney,” Scott admitted. “I definitely wouldn’t have done these things sober, but it was all wrong.”

It’s long been rumoured that there’s a curse surrounding the fam as there’s been a whole lotta Kar-Jenner breakups. Kendall Jenner calls BS on the urban legend during the KUWTK reunion.

“What I don’t like about the narrative is that the blame is on us,” Kendall said. “The men need to take that responsibility… It’s almost, like, offensive.”

Rob once hooked up with Khloé’s bestie Malika 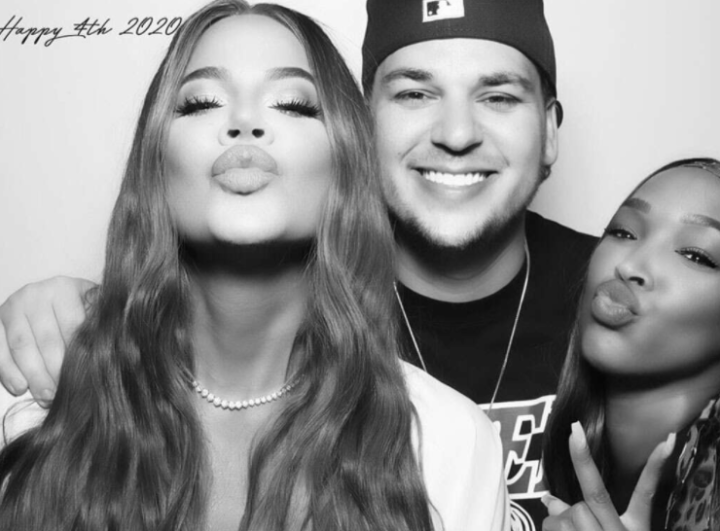 Kim revealed that her bro Rob Kardashian (remember him?) hooked up with Koko’s bestie, Malika Haqq.

“They were dating-ish,” the KUWTK star spilled. SPICY.

The Kardashian bro was not present himself, but Khloé gave an update on why her brother, who was heavily involved in filming for the first few seasons of KUWTK, suddenly disappeared.

“It was not so much about physical appearance but a lot about how he felt internally about some of the women in his life and how they might have treated him or how he felt they might have used him to get to certain areas and levels and I think that really affected him,” Khloé said.

“I think he’s just getting stronger and you have to get heartbroken and you learn from your mistakes.”

The latest on Jordyn Woods

“I forgive Jordan, or else I would be a prisoner in my life,” she admitted. She even encouraged Kylie to follow suit and forgive her as well.

“I don’t care enough to ever hurt my sister,” she added.

And that’s it, fam! Well, that’s not it at all, there’s more tea in the actual eps which I implore you to go suss out on Hayu ASAP along with the emotional KUWTK finale.