Last year, reality TV lovers Keira Maguire (of The Bachelor fame) and Matt Zukowski (of Love Island fame) suddenly dropped off each other’s respective Instagrams after sharing loved-up snaps on the daily for quite some time.

“Our relationship didn’t end for any other reason than I was so just so busy with work, but who knows what could happen in future,” she said.

“We still talk every day, so it’s like one of those things. We get along so well.”

She added, “I’m still young, I’m not in any rush and everything is about timing. I’m very focused and very driven on what I’m passionate about.”

When the publication questioned her about who made the decision to call it quits, Keira confirmed it was very much a “mutual decision.”

To quote that episode of Seinfeld, “There’s no such thing as a mutual breakup.” 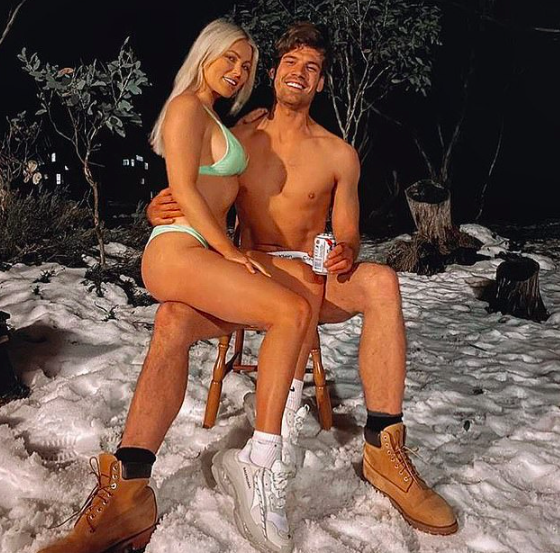 What is with influencers getting naked in the snow? Why do they think we want to see this? (Credit: Instagram)

Daily Mail Australia adds that the pair unfollowed each other on Instagram earlier this year (which was a definite sign that they were donezo) but Keira Maguire later re-followed Matt Zukowski, while he did not re-follow her. The SHADE of it all.

The publication probed Matt about the split recently and while he didn’t confirm or deny the rumours, he reportedly hinted that he was single.

The pair began dating last March, a few months after she finished filming for Bachelor in Paradise in Fiji which, as you’ll remember, was an absolute shitshow. So much so that Bachelor In Paradise has been taken off the air for 2021, a decision that Keira Maguire applauded on Instagram.

Jamie Doran, who starred along her on the show and was equally chaotic that season, then weighed in with some payment goss, which we all love.

Last year, a Network 10 rep confirmed that the show would be put to bed for 2021 after the abject chaos that ensured.

“We love all the excitement, drama and of course love that Bachelor in Paradise brings, but we have decided to rest it in 2021,” the spokesperson said.

Ah well, I’m sure Keira Maguire will be back on the 2022 season of the show for another shot at wreaking havoc. And knowing the Bachie producers, they’ll probs sent Matt Zukowski in as well for an added twist.