You’ve heard of Dress Gate, but now we’ve got Wedding Dress Gate on our hands as Australian bridal designer Johanna Johnson has accused singer Ricki-Lee Coulter of “deceptive” behaviour for not crediting her work in a recent Instagram post.

However, Ricki-Lee has maintained that the dress was a collaboration between her, Johnson and a dressmaker in Paris and that she has credited Johnson many times in the past.

It all began when the designer called out Ricki-Lee Coulter on Instagram for appearing to tell fans that she and a French atelier crafted her wedding dress for the singer’s 2015 wedding, without mention of Johanna.

On Johanna’s Instagram Story, she shared a Daily Mail article in which it is claimed that Ricki-Lee’s wedding dress fitting took place in Paris in 2015.

“I would not normally comment on such matters. However after six years of no credits, now to lie as to the true location and designer?” she wrote.

In a subsequent Insta Story, that features screenshots of comments she left on Ricki-Lee’s post, she wrote: “This kind of behaviour needs to be called out in this industry.” 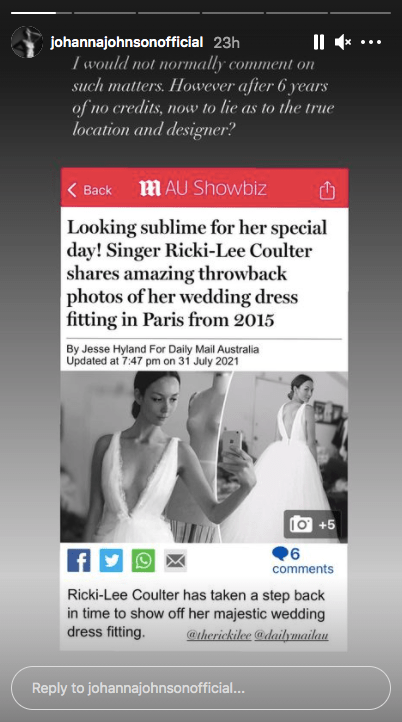 Johanna then shared comments where it appears Ricki-Lee Coulter claims that she designed the dress with a French atelier.

“We are the ‘amazing Australia atelier’ that had the privilege of designing and creating this gown,” Johanna wrote.

“I am so blessed to work with some truly amazing humans and professional artists who always give credit where due, and are so grateful for our craft.” 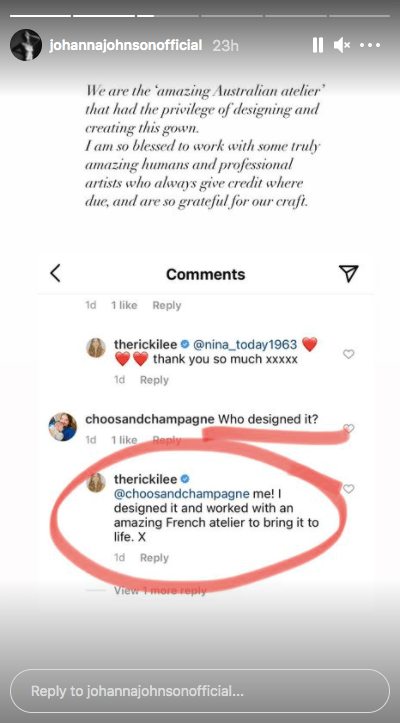 The next Instagram Story features a screenshot of Johanna’s comment on Ricki-Lee’s post, where she gives her personal view of Coulter’s alleged conduct: “Highly unprofessional, untrue and frankly unkind.”

She also contends that the fittings occurred in LA, not in Paris, and that she and her team worked “many long hours” to craft it for the singer’s special day. 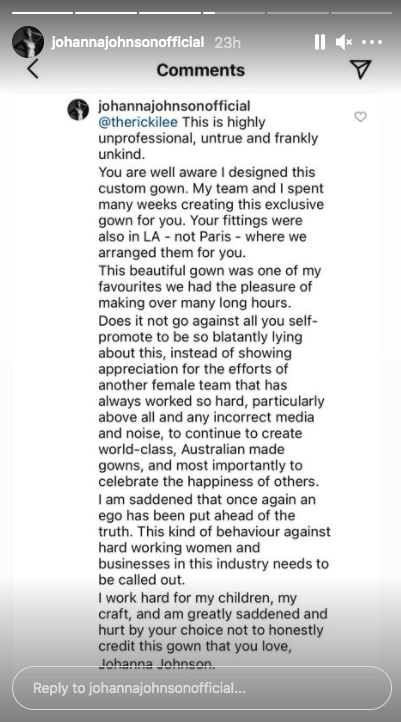 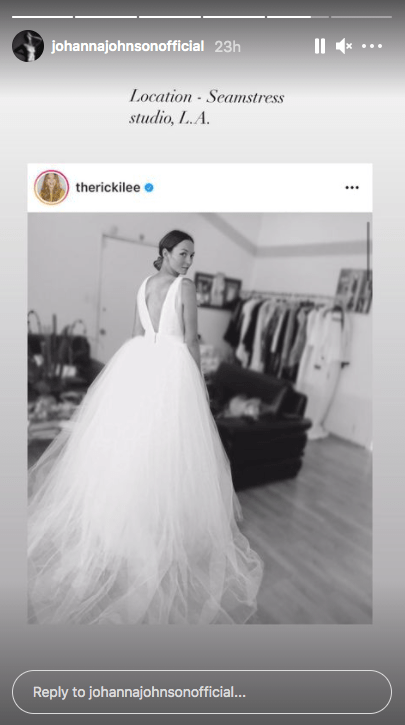 In the final Instagram Story, Johanna claims that “the only part of Paris in this gown” is the “hand-beaded Parisian lace at the neckline from my own collection, which I personally selected in Paris.”

“I adore this gown and our work on it,” she added. “It saddens me greatly that in this day and age, some women still cannot support others. I thought we were past that?” 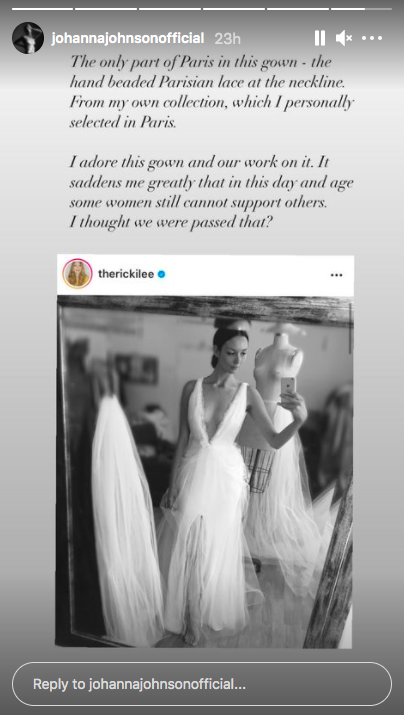 Johanna later shared an Instagram post, featuring Ricki-Lee Coulter in the wedding dress, and wrote: “Thank you to all the genuine and professional artists we have had the pleasure of working with who always give credit where due.”

Johanna says she is saddened that “someone could risk putting a ‘cloud’ over their own special gown and day? Why not apologise, and set things straight instead of just deleting the deception (as well as their posted inspirational quotes they say they walk true to).”

She concluded, “I am so proud of our body of work and international label. As well as the people I work with. I thank them daily and I’m thanking them again now. JJ.”

READ MORE
So Dramatic! On The Interview She Regrets, Celebs Who Blocked Her & The Most Requested Guest

The So Dramatic! podcast did some digging and noticed that Johanna Johnson was previously credited for creating the dress back in 2015, as per an article by news.com.au. 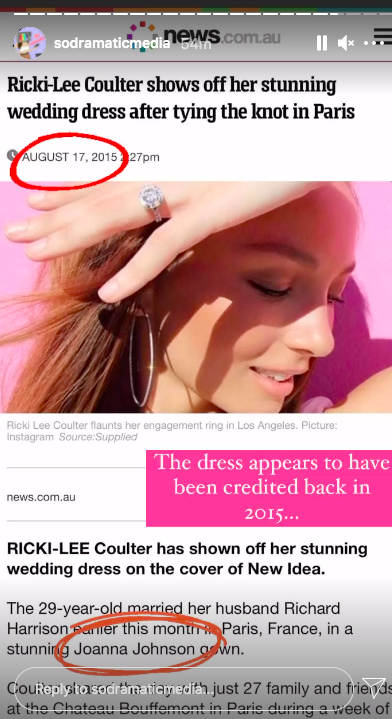 A spokesperson for Ricki-Lee told PEDESTRIAN.TV that the dress “was always a collaboration, between Ricki-Lee and JJ – as Ricki-Lee said and credited in New Idea six years ago.

“She had one fitting in Sydney (with JJ) – and further fittings in LA and Paris by herself.”