Hello friends and welcome to another brilliant instalment of our RuPaul’s Drag Race Down Under recaps, where we go over the riggery, fuckery, drama and kaflamba of every episode of the brand new Stan Original series. This last episode? So wild. So entertaining. Let’s not waste any fkn time.

This episode was fkn huge, mainly because it deals with scandals and real-world drama that I have been dying to talk about. Also because there was a Vanessa Amorosi lipsync song, but we’ll be getting to that much later.

Anita Wigl’it, the loveable fan-favourite with a heart of gold is gone, and the entire group mourn the loss of her infectious and fun personality. Who will we turn to now for laughs, giggles and excessive use of the phrase “dry ass pussy”?

READ MORE
Drag Race RuCap: I Have Many Questions After That Twist Including 'What The Fuck'?

Kita Mean is the most affected by the loss of her friend, but it’s pretty hard to take her seriously when she’s still in her Lollipop’s Playland costume. Karen from Finance is deadset on bringing her A-game (five episodes into the competition), Kita wants to fuck up the game to make Anita proud, and Art Simone is really just happy to be here.

We still haven’t seen any huge wins from Miss Simone, but it’s coming, I can feel it.

The queens then enter a conversation about NZ queens vs Australian queens, because it was bound to happen eventually, and Elektra Shock joins Kita in mumbling sweet nothings into their mics that barely pick up sound.

I’m sure they had some savage lines about Australian drag, but I wouldn’t be able to tell you. A new day has dawned on the Drag Race Down Under girls, and Etc Etc makes it known that they’re still peeved at the results of last week’s challenge.

Kita, who dipped herself in hot glue and rolled around in a ball pit, was safe, while Etcetera, who channelled the ethereal powers of the fertility goddess with a single piece of purple fabric, was not.

They decide to settle their disagreement by letting the powers of the sorting hat decide whose look was truly greater. Unsurprisingly, the brain-sucking ball crown elects Kita as the new supreme. Maybe next time, Etc. It’s now time for the reading challenge, because reading is what? Fundamental.

Kita has some stunning reads about Elektra being a man and Etc Etc needing to wake the fuck up, and it’s very entertaining.

Art however has some super-smart reads on a couple of the queens, mocking them tastefully with that beautiful accent of hers.

Maxi Shield had some reads as well! this right here? foreshadowing. keep it in mind for later.

Scarlet Adams does a pretty poor job at reading her fellow contestants, and ends up revealing a dark secret from her past.

She has a bald spot on her head, and finally admits it to the camera, after months of us already knowing this, and scrutinising her for it.

(All jokes aside, the real revelations will be coming very fkn soon).

Elektra shocks us with how versatile she is, and does a pretty good job at reading the queens.

Also this mesh combo with the denim jacket? I swoon. this picture shouldn’t do things to me and yet here we are.

Informercial queen Suzanne Paul joins the fold, and helps direct the queens through their yeast spread ads, which is the focus of this week’s main challenge.

Nothing says vulnerability and expertise in the field of drag like selling yeast spreads, right?

Karen, yet again, fails to cash in on her finance puns, and ends up selling a product called ‘Discharge’ for some godawful reason. It’s taxing to watch her act it out, that’s for sure.

Meanwhile, Maxi Shield is stroking kittens for some reason and Art Simone is still just happy to be here. oh to be a bumbag.

Across the pond, Kita is shoving yeast spread up her nose and gagging, while Elektra is actually doing a stellar job at directing the Drag Race Down Under trophy hunks to do her bidding. The top jumped out.

Not long before this, Etc Etc had a go at the other queens for excessive “fart jokes and boob jokes”. So anyway, here’s their product, called ‘Piss’. me, lost at the sexual health clinic

Back to the Drag Race Down Under Werk Room and FINALLY Scarlet Adams brings up the fkn blackface. We all knew about it, we’ve all been wondering if it would ever come up on the show, and now we see it, unfurling before our very eyes.

The queens are rightfully shocked, and Scarlet does her best job at some semblance of an apology, even mentioning that she was recently called out about it. 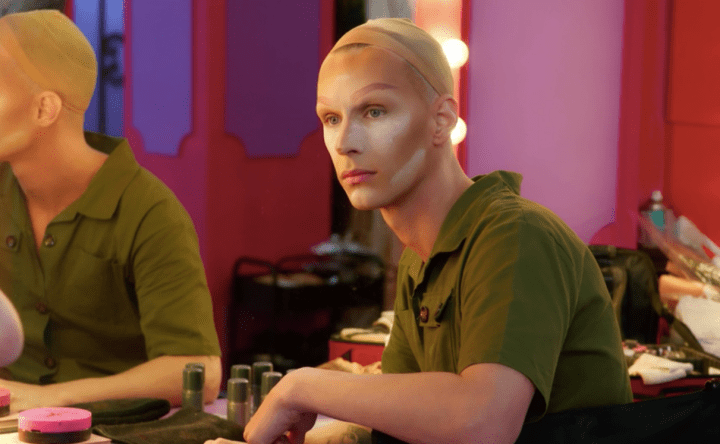 no joke here, this fkn sucks.

Art isn’t buying it for a single second and neither is Etc Etc. The two of them slam Scarlet for pitching it off as some childhood mistake, when the reality is, you should never consider doing blackface for any reason whatsoever.

Scarlet then tries to call upon Maxi for support, but the Sydney legend is basically like “you’re on your own on this one, love”, and let’s her know that although where she grew up, people were racist, nobody dressed in blackface or mocked other cultures.

It’s also interesting to note that Scarlet Adams currently has the most wins on Drag Race Down Under, while every POC has been eliminated from the competition, and it’s only episode five. Make of that what you will I guess. “is this bitch for real?”

Anyway, it’s runway time! Did everyone see the runways? I thought the runways looked lovely.

Karen is a firefighter! How fun! Meanwhile, Etc Etc is the fire itself, Maxi is a lovely lass from Picnic At Hanging Rock and Art Simone is a super convincing Kath Day Knight, who is really just happy to be here.

The judges fall in love with Karen’s runway for how it represents the devastation of the Aussie bushfires, and Etc Etc is standing right there, with a look, about the bushfires. “we’re not gonna win this week, are we Toto?”

We get to watch everyone’s stunning ads, and Elektra has the best one by far, followed by Kita’s lovely video of her gagging on yeast while dressed as the legendary drag queen Divine. It’s pure fkn brilliance from the Kiwi girls this week.

READ MORE
Drag Race RuCap: It's No Bing Bang Bong But We'll Take Whatever The Fuck You'll Give Us

Meanwhile, Maxi does terribly, Karen’s ‘Discharge’ ad is as rotten as it sounds, Etc Etc’s ‘Piss’ is as vulgar as it sounds, and Art is, yet again, just happy to be here, selling yeast spread on Drag Race Down Under. me at all the drama oozing from this episode. just sucking it all up

Because Ru knows how to make some fkn good television, he brings up the blackface scandal yet again to allow Scarlet to apologise for it and move forward.

It’s fkn wild that Ru apparently just found out about the myriad of blackface and culturally insensitive pics that Scarlet has posted over the years, and one really must ask what the hell happened during the recruitment process for these queens.

Understandably, the queens are shooketh. Ru decides to not cancel Scarlet, and things move on as if nothing happened. It all feels very weird to witness, and isn’t something that has ever happened on the show before. Karen and Art’s faces were my face. Etc Etc’s face was my soul.

Anyway, moving swiftly forward, Elektra is announced as the unsurprising winner of this week’s challenge, and it is announced that Etc Etc and Maxi are in the bottom.

The pair are asked to lipsync to Vanessa Amorosi’s astral bop, ‘Absolutely Everybody’, and my spirit is healed. I told you it was foreshadowing.

And with her microphone stunt and captivating personality, Maxi wins the lipsync and sends Etc Etc packing.

It’s such a shame to see yet another queen with so much to offer go home so soon. The show is really just kicking off all the big personalities one by one, and it hurts my little gay heart to see.

Bloody well done Maxi, super keen to see what you pull out from under your breastplate next.