Billie Eilish has sparked yet another colour war, as if the prolific dress of 2015 wasn’t enough to get everyone yelling across the dinner table.

After going on a massive Instagram tangent that spanned across multiple stories, Eilish has firmly stood her ground about the colour of her shoes.

While some people on Instagram are claiming that the shoes are mint green and pink, others can only see mint green and white, and then some are saying the shoes are just pink and white entirely. It’s a contest for the ages, and it makes me want to get my eyes checked, because apparently, I’m on the wrong side.

In the middle of her Instagram spiel, Eilish even posted a picture of the proper shoe colour and let me just say, the shoes kinda look nothing like it. Perhaps, it isn’t me, but the children who are wrong.

“Y’all are going to hell,” she captioned a pristine mint and white image of her sweet pair of Nike Air Uptempo’s in the shade of mint and white.

Fans were quick to note that this is surely an optical illusion similar to the dress, because it is quite clear throughout Billie’s other videos that the shoes do carry some pink parts. Really makes you think. 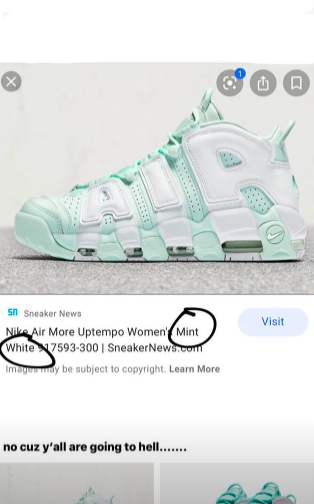 Thankfully Eilish’s mum was also offered a chance to choose her colours before the court of Billie, and also agrees that the shoes are pink, mint and white.

I completely see what she is saying too, and you can check out her reasoning in the Insta vid below.

Eilish however was not satisfied with just ten explainer videos about the damn shoes, and so she topped it all off with yet another rant, expressing her disbelief in how people see the colour pink.

“I’ve come to the conclusion that you guys just don’t know your sneakers at all,” she said.

“I don’t care what you think they look like, I care what they are! The whole internet is gaslighting me!”

Thankfully who can hear mama Eilish in the background telling her to calm down, because this is truly a tangent for the ages.

However, all these shoe shenanigans really do beg the question. Are the shoes pink and green, green and white or pink and white?

Fire off in the comments, I’m team pink and green until the end.