If you’ve watched even five minutes of Bachelor In Paradise this season, you’ll know that contestant Bill Goldsmith is acting like a bit of a knob — most recently, he lied to his main Paradise squeeze Alex Nation‘s face, even though we had all seen the incriminating footage of him cheerfully telling Florence Alexandra that he was single during a cosy overnight date. Sigh.

His latest faux pas has come not on the Network Ten reality show, but on his own Instagram page, where he posted a pic with an ANZAC Day caption yesterday. Which is all fine, until you realise that it’s a pic of him with Alex and has nothing to do with paying tribute to the sacrifices made by Australian and New Zealand troops at all.

Relating “lest we forget” to your stint on a reality show? Oh, honey, no.

@ktina_s asked: Wtf does this pic have to do with ANZAC Day? So distasteful mate.

From @clarehemsley: Oh yeah I can see the clear connection between this photo and the hashtag lest we forget…. oh wait. Nope no I can’t.

@sir_satan_to_you said: Lest we forget? You piece of lying shit. Maybe go spend a few hours chattin to a digger.

From user @touched_by_a_bogan: What so the Anzacs died so you could go to Fiji and root? Glad you gave them a thought today.

@gemacorner weighed in with: Don’t ever use lest we forget in this context you absolutely [sic] f***wit. So disrespectful.

And from @savicunningham: Anzac Day isn’t about you being a sly cunt on TV buddy!

Other users asked him to take the post down, which evidently the 31-year-old has refused to do, because it’s still up on his account today.

Bill actually attended the ANZAC Day Dawn Service to pay his respects before posting the pic, so his heart might be in the right place? It’s all a bit confusing really. Adding to the drama, he posted this to his Insta stories yesterday. 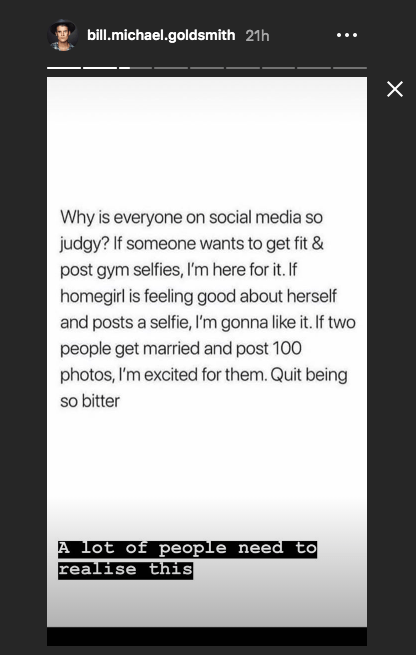 Is that a dig at the ANZAC related haters? Or this person who missed the point but took great offence to Bill’s hair?