Oooh Boi: A Bunch Of Bachie Stars Have Moved In Together In Bondi And The Tea Is Piping Hot

The Bachelorette may have failed to ignite audiences or bring the leading ladies suitable matches, but at least it brought some good: it birthed a lifelong friendship between contestants Adam Todd, Shannon Karaka, Samuel Minkin and Nick Chamberlain.

The four Bachelorette 2020 blokes became good mates while starring on the show together and according to The Wash, they’ve now moved in together in Bondi.

The publication hit the boys up recently for a photoshoot and interview on their Bondi rooftop and excellent news, thirsty fans, they’re shirtless in every pic. Peep them here.

During the interview, the lads were asked if they were still in touch with the ladies they were recently gunning for on Bachie, Elly and Becky Miles.

Unsurprisingly, none of the boys had spoken to either gal, aside from liking the odd Insta pic, but Nick said that when and if he does see them, he’d “have some questions.”

“What question, ‘Why did you get kicked off so early?'” Adam retorted. True, TBH.

Since The Bachelorette ended, the boys have been spotted out and about with a bunch of other local reality stars and according to Adam, “There’s a bit of gossip there.”

“It’s a bit like a clique,” Shannon added. “Everyone sort of hangs out together because you’ve shared the same experience and you have that in common.” 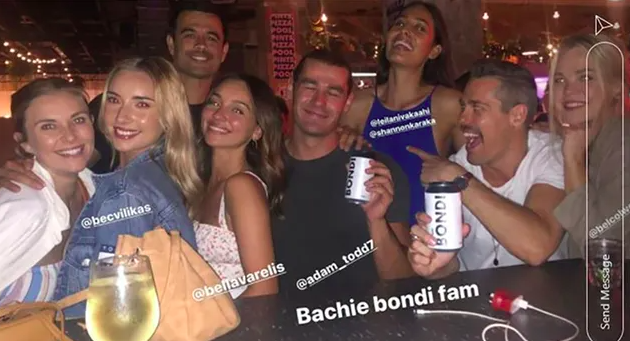 Nick then confirmed that there are some budding romances between some of the gang. “Not me, but a few of the other guys may have a few stories!”

“No comment!” Shannon added. “We’ve all been hanging out as a group, but it’s never one on one.”

As for their brand new pad, Adam said there’s “some interesting characters” about and Shannon said they’re “just trying to get involved in the community and settle” into their shared space.

Catch the full interview with the Bachelorette boys here.