I don’t want to sound like an Aussie cliche, but I love Vegemite on toast. I love it so much that I’ll spread an inch-thick layer of that thick black, yeasty goodness on a bit of bread, eat it in two or three bites then immediately come back for more. I’d happily live on the stuff if I could.

Point is, I never thought there was a wrong way to eat Vegemite on toast, until I saw this recipe on US website Food.Com, and now I’m irrationally annoyed and it’s literally all I can think about. Just take a look at this cursed image that accompanies the recipe, then we’ll talk, I guess: 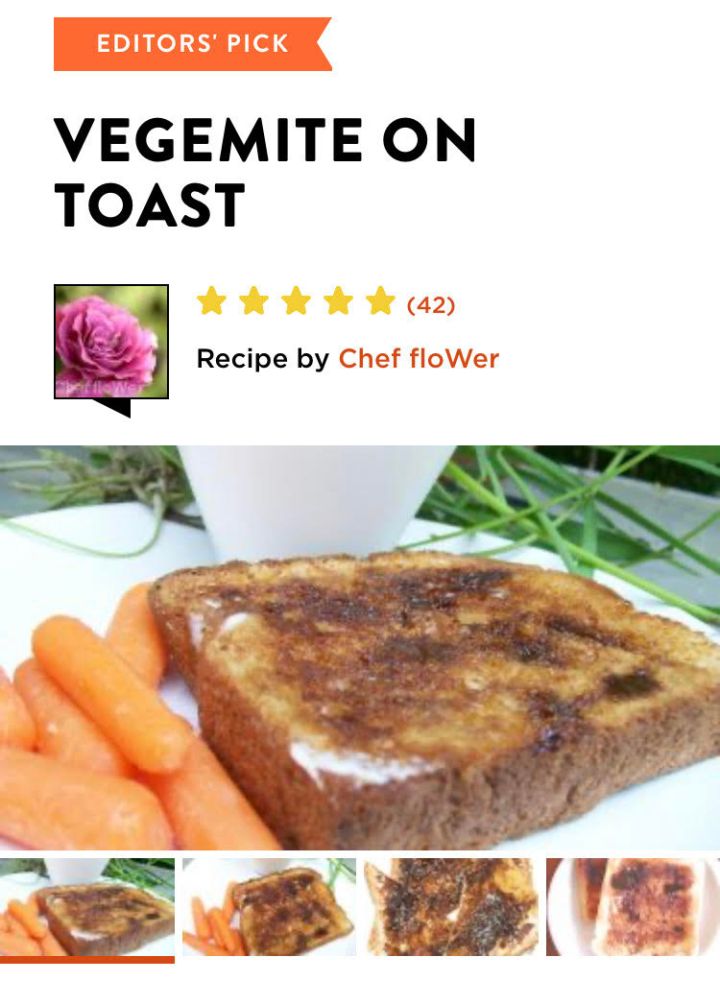 Here’s the recipe itself: 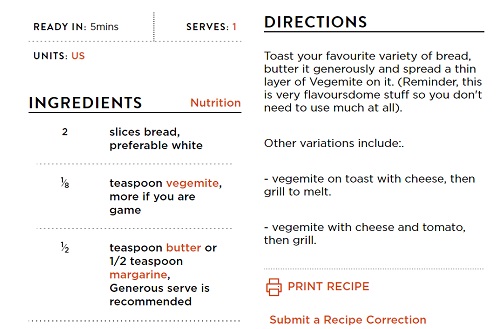 After a good deal of crying, reflecting and soul-searching, I’ve narrowed my problem down to three specific issues, which I’ll now address in turn:

1. Baby carrots do not belong anywhere near this dish

To be fair, the recipe does not actually say to put baby carrots next to your Vegemite toast, but it’s somehow implied that this is a good thing to do. The ingredients are simply two slices of bread, 1⁄8 teaspoon of Vegemite and 1⁄2 teaspoon of butter or margarine, but the carrots are there, taunting the viewer like some kind of deranged serving suggestion.

I counted, and there are six whole baby carrots there. SIX! Who would eat that many raw baby carrots in one sitting, let alone as an accompaniment to breakfast? The JOY of Vegemite on toast is the warmth and crunchiness of the bread and the saltiness of the spread, and these fucking carrots are just sitting there as an affront to all of that. Jesus, I’m UPSET.

2. Since when does the act of spreading things on toast count as cooking?

The more fundamental problem with this ‘recipe’ is it frankly does not qualify as one in the first place. I really can’t put this any better than my mate, who said “this is not a recipe, this is assembling foodstuffs.” I couldn’t agree more.

There are literally three ingredients here, one of which is bread and one of which is butter. If spreading some shit on some other shit counts as cookery now, then I must be Julia Child. This is NOT a recipe, folks, it’s barely a fucking set of instructions!

I also take issue with the fact that this dish claims to be ready in five minutes. FIVE MINUTES! What are you meant to do with the other four minutes after you’ve toasted your bread and smeared everything on top? What kind of nightmare person would actually take a whole five minutes to do that?

3. The butter to Vegemite ratio is just fucking wrong

Let me preface this by saying that I’m not some kind of Vegemite snob. I’m not going to tell anyone that they’re using too much or too little Vegemite on their toast. We all got on poor Tom Hanks‘ dick and accused him of spreading his Vegemite too thickly that one time, but I say let him live, the man has given us so much, let him eat it however he wants.

That said, 1⁄8 teaspoon is simply not enough Vegemite, especially when there’s, what … four times as much butter as Vegemite in this recipe? I don’t know, I’m gay, I can’t do maths, but the point is that those numbers are way off and I’m distraught at the very thought of this ratio. Where’s the flavour in that? How are you even going to taste the Vegemite? HOW?

As a side note, 1⁄2 a teaspoon of butter isn’t even enough butter to really soak into the bread! This nothing but a recipe for dry and flavourless toast. This recipe is a LIE. Breakfast is RUINED. This recipe has RUINED breakfast.

Anyway, I’ve worked myself up into such a state about this that I should probably log off for the day. I might have overreacted a wee bit here. You can eat your Vegemite on toast however you want, with whatever butter to topping ratio you want, I’m not the boss of you, but please, please don’t eat it with baby carrots on the side, that’s just bizarre and upsetting.