Someone Dreamed About A Cursed Salad-Stuffed Cookie Hand, Then Spent A Week Making It

Sometimes our brains create the most cooked, absolutely heinous ideas and spews them at us in the form of a dream. Maybe it’s the concept of being able to fly, or you’re being chased by a person with lobster claws for hands. By no reason should you believe that your fucked brain time must be recreated, which is exactly what one person on Twitter did today. Enter, the monstrosity known as ‘King’s Hand’.

Wisconsin-based Twitter person @thatfrood posted this morning that they recently had a dream about a kind of food/dish/thing called King’s Hand, which was a hollowed M&M cookie in the shape of a hand, filled with Greek salad.

I wish I could tell you that gastronomical abomination remained in their late-night subconscious but no, they went right ahead and decided to make the cursed thing.

The whole process apparently took them a week, which they documented for the collective enjoyment (?) of the Internet, and resulted in exactly what it says on the tin; a hollow hand-shaped M&M cookie filled with juicy, fresh tomato, cucumber, and crumbly fetta cheese.

Thank you, I equal parts love and absolutely fucking hate it.

some people would like to know how to make King’s Hand. I don’t claim to know all the answers, but here is how I did it. First, you will need to make a mold of a hand. For this I used food grade silicon putty safe up to 400 deg. I ordered it online. It takes an hour to go solid pic.twitter.com/vSqkVbCRPd

They started off by making a plaster cast of their own hand in food-grade silicone putty. Not too sure what else you’d use this for apart from making joke foods of limbs and other body parts, but good to know it exists.

Next was mapping out how the hand was going to look – popping M&Ms in the places where the knuckles and fingernails are on the had. A very nice touch, if you ask me.

Then it was a matter of padding it out with cookie dough and chucking it in the oven to bake for a quick proofing.

Next, make m&m cookie dough. I just took some recipe off online. Fill your mold with the dough. Set the oven to a lower temp than the recipe requires (mine was 325 vs 375) and bake for like 2-3 times as long. Put the m&ms for the nails and knuckles in first pic.twitter.com/gtFR9HzGcT

After that, they made the back of the King’s Hand (also from M&M cookie, as the dream demanded) and popped them both in to bake.

Take it out and scoop out dough for the base and to make it hollow. Flatten the scooped out stuff into a thin sheet and put in the oven to bake, along with the hand again. I dunno, I did like 10 minutes. Raise the temp back up to bc now you want it hot and baked pic.twitter.com/rVoyHKTFgJ

Once baked, the hand and its backing were popped into the freezer so they could be removed from the mould without crumbling into a billion bits. While that was happening, they whipped up a simple Greek salad.

Take it out and freeze it! Gotta be cool and solid to demold. Chop up the Greek salad meanwhile. When it is solid remove from the mold, cut around the hand to remove the overhanging edges, fill with salad, cover with base, and you have the King’s Hand pic.twitter.com/QmJxajchDK

And that, is how you make the absolutely fucked dreamscape dish, King’s Hand.

I had a dream where there was a food called “King’s Hand”, a hollow hand made of m&m cookie, filled with Greek salad.
I could not stop thinking about it.
Here is the culmination of a week long effort. pic.twitter.com/tMVutcj9H8

Each dish on their own, delightful, delicious, very yum. But together? Cursed, damned, abhorrent. A snack that is absolutely heaving with horrible, yucky energy. 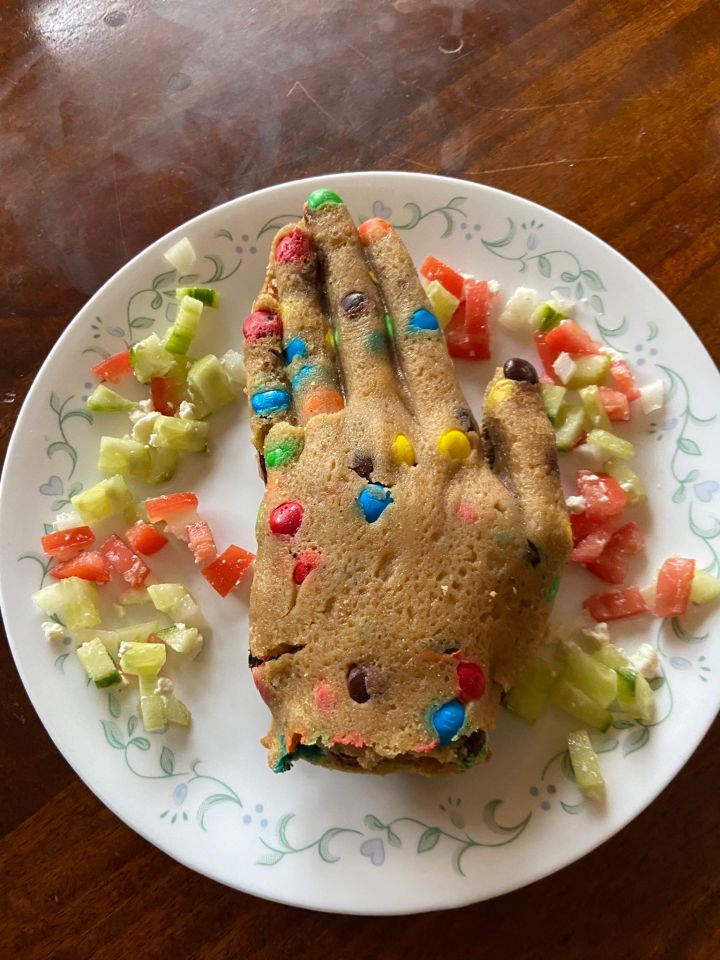 But my God do I want to munch on it.