Ahead of the NRL State of Origin on November 4 – yep, the footy season’s not done yet, mates – limited edition blue and maroon foods have once again begun to crop up again so we can appropriately decorate our guts with the colours of our footy allegiances. I’ll say it right here and now, the State of Origin is absolutely the pinnacle of cursed snack food energies, and this year KFC has jumped right in with a limited run of Original Recipe burgers for Origin.

The purveyors of fine fried chook have announced two twists on the classic Original Recipe burger, which will hit selected stores across the sparring states (Queensland and NSW) and a couple of spots in the ACT as well because I guess Scott Morrison probably wants in on the footy burger too. The man loves his footy, it’s all he seems to care about these days.

KFC’s coloured Origin burgs come in the two bright colours of the teams – blue and red (should be maroon, but you know) – and feature two Original Recipe fillets, two layers of cheese, lettuce, a cheesy mustard sauce sandwiched between the coloured buns of your beloved team. 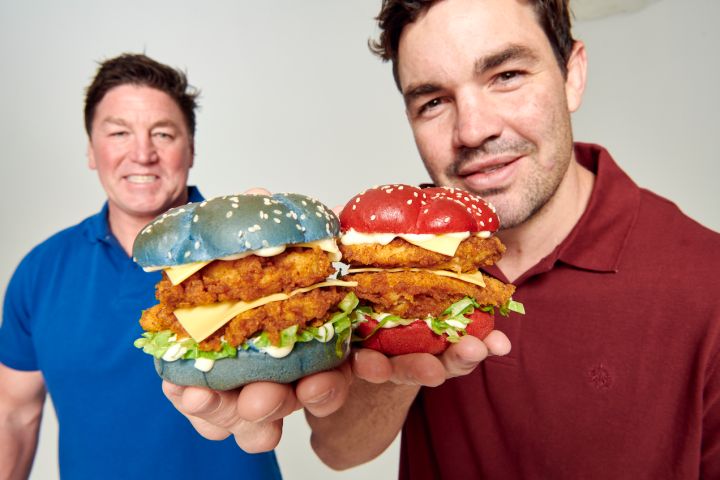 Look, the Origin KFC burgers aren’t as wild as those bright green sausages that Canberra Raiders fans cooked up last year but either way, you’re probably going to shit some wild colours the next day after hoofing down one of these burgers, that cannot be denied.

These limited edition burgs to feed you as the game goes state vs state and mate vs mate are set to drop into 13 stores across QLD, NSW and the ACT from November 3, and will hang around until November 11 – so you’ll be able to tuck into one for the first two (2) Origin games this year.

If you’re in NSW, you can cop a blue burger (or a red one if you’re really fucken game) from KFC stores at George St in Sydney, Penrith Leagues, Jesmond, Campbelltown, Kings Park, and Fairy Meadow.

Those in QLD looking to chuck a red burg (or blue, if you’re a NSW loyal in enemy territory) you can grab an Origin burger from Rockhampton South, Redbank, Mackay North, Aspley, Maroochydore, and Marsden KFC stores.

For those in the capital (read: the PM, probably) you can nip into the KFC at Nicholls to pick up a cursed burg.

Just make sure you cop it in time for kickoff, which happens at 8.10PM AEDT on November 4 at… Adelaide Oval. Neutral ground, baby.