Earlier this year, Samsung unveiled one of the world’s first foldable smartphones, the Galaxy Fold. The tech community has since been sceptical about the device, calling it more of a tech demo than a consumer product, but now that some have finally gotten their hands on one, the reviews have been fairly positive.

The Galaxy Fold is essentially two devices. When folded, you can use the 4.6-inch Super AMOLED display like you would a normal smartphone. Send messages, scroll through Instagram, etc. But when the screen is unfolded, it turns the device into a tablet and immediately shifts what you were doing to its larger 7.3-inch Dynamic AMOLED Infinity Flex Display where you’ll not only get a bigger picture, you’ll also get more functionality if the app in use has been optimised for it.

The device also allows multitasking for up to three apps simultaneously, which is great if you’re the kind of person who loves to frantically switch between a bunch of stuff. Incredibly, the Fold packs a system of six cameras – three on the back, two on the inside, and one on the front.

In terms of price, the Fold will start at US $1,980, but no Australian pricing has been revealed just yet. The US amount roughly translates to $2,770 at the time of writing, but I’d probably expect the local price to be nudging $3,000.

The general consensus so far seems to be that Samsung’s take on the foldable phone actually feels more like a polished consumer product than expected. It’s not without its shortcomings, though, and most notably, that’s the screen’s crease along the hinge, which can apparently be seen and felt.

“It feels much more stable and polished than I expected going in, but there is still some work to be done on the software,” The Verge says. “Okay, here’s what you are really waiting for: you can see (and feel) the crease on the folding screen, but it’s really not that noticeable and perhaps worth the trade-off of having a big screen that you can fold up.”

Prior to this, smartphones have largely been the same: black slabs of varying thickness, size, material, and features. The Fold is exciting because it breaks this form factor, which is why it’s interesting to hear how it feels and behaves physically, rather than simply noting small differences in internals and software.

“The first thing I noticed what the weight as I lifted the Fold off of its stand,” Cnet says. “The heft of it, and the smooth, glossy glass backing. And then, I bent it in half. That’s the moment I’d been waiting for. I wanted to understand the Fold on a physical level, to feel how much weight you need to throw into it to close the device and open it again. To gauge the smoothness of that big hinge as the “wings” open and close. It isn’t hard, but you do need to be deliberate, and I like the little bit of power the Fold demands from you.” 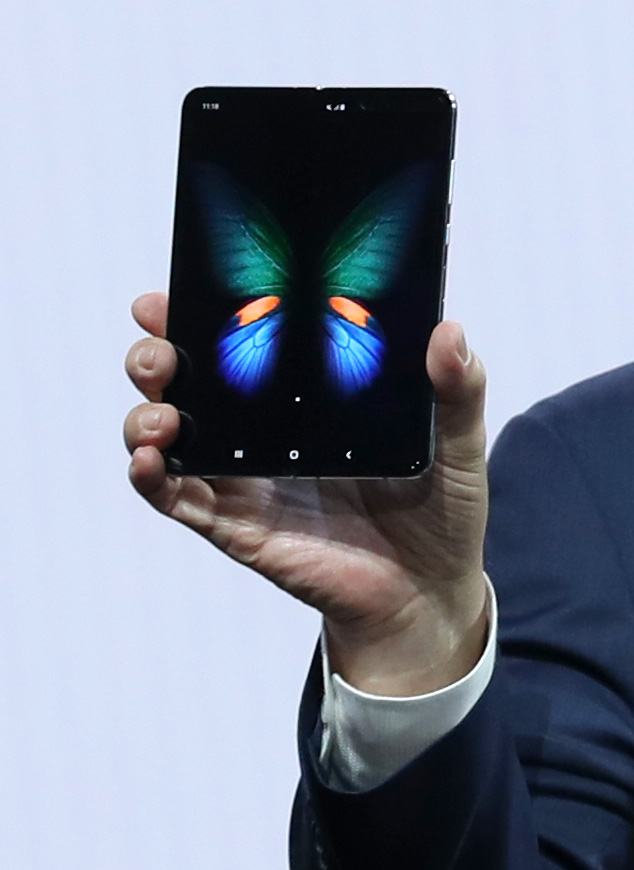 Some reviewers have pointed out that it feels less like a phone and more like a small tablet, which comes with positives and negatives in itself. When folded, it’s quite a tall device and as such, can be tricky to fit in shallow pockets, but when opened, it provides a screen much larger than a traditional phone’s.

The big question is, who should buy the Fold? Well, that depends on the kind of relationship you have with tech. If you consider yourself an early adopter and the idea of having a foldable display exites you, by all means, fork out the money. If not, you might wanna wait for a few iterations down the road, one reviewer reckons.

“From what I’ve seen so far, the Fold isn’t a phone meant for the average consumer, or even the wealthier consumer more willing to pay a premium for advanced features,” Engadget says. “It’s more a well-rounded proof of concept that shows Samsung can still surprise us, and will likely only appeal to the thirstiest of fans.”

As far as first impressions go, they’ve been pretty positive so far. I don’t know if I’d run out and buy one just yet, but it’s exciting to see smartphones take on a brand new form. If you’re keen on a new Galaxy S10 in the meantime, you can suss some red hot deals for that below.

As Pedestrian editors, we write about stuff we like and think you’ll like too. Pedestrian often has affiliate partnerships, so we may get a share of the revenue from your purchase.