Doom Eternal Preview: If I Had To Save Earth From Demons, We’d All Be Totally Fucked

Doom Eternal is a game about the end of the world. Of course, Australians will be well familiar with this concept after the last few months we’ve had – but rather than the onslaught of rising temperatures associated with climate change, Doom Eternal is about a world at the mercy of hideous, abominable demons.

The Doom franchise has always been fairly one-note: you’re a Doom Slayer, a killer of demons. The earth is doomed. You kill demons. Simples. Doom Eternal goes a tiny step further, adding in a snazzy opening cinematic that sees the Doom Slayer, stationed on the outer brim of Earth, tasked with preventing an all-out apocalypse.

In the preview our team was invited along to, I was able to get my hands on the opening chapter of the game, along with two other levels – “Exultia” and “Cultist Base” – that made up a three-hour gameplay stretch. Each level was radically different, but the main thing that stuck out? All the demons. All the god-damned demons. 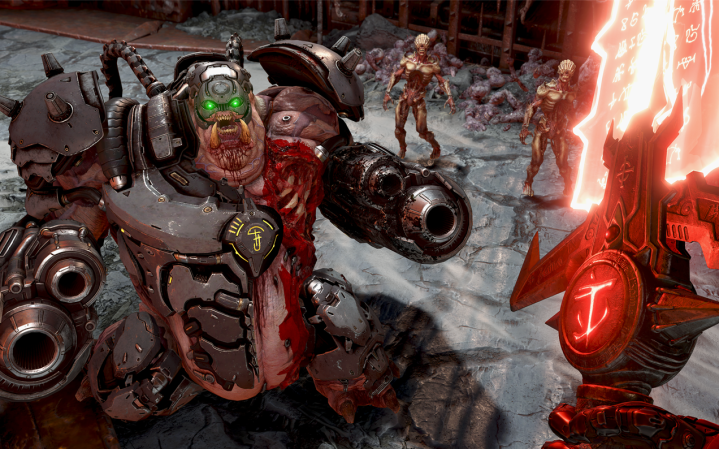 While I was trundling along, dispatching countless demons in my wake, I started to do a wee bit of a mental calculation. I estimated I was killing about four demons every 10 seconds. That meant for every 10 minutes, I was killing 240 demons. Each level lasted about an hour long, so for every level, I was killing upwards of 1,440 demons. Three hours later, I likely had 4,320 demon corpses on my hands. Now, I quit maths in Year 10, but that seems like a lot. But what would Doom be without lots of cold, bloody murder?

READ MORE
EB Games Announces 19 Store Closures & I Think They Might Be Having A Sale, Maybe

The opening chapter of Doom Eternal takes place in a dank and rotting castle, filled with blood, guts and writhing corpses. Also, there are demons. Many, many demons. Some of them are Zombie shamblers. Others are great piles of oozing, fleshy goo. The creepy, spider-like Arachnotron makes its unfortunate return here, and there are also jacked-up Soldiers running around with powerful guns. All of them are, understandably, terrifying.

Rather than simply being a run and gun (my usual technique for avoiding all things that go bump in the night), Doom Eternal is what I’ll call a ‘strategy killer’. By which I mean, if you go in mindlessly, you’ll end up being brained. In the opening chapter, the Doom Slayer is hopelessly outgunned. Your ammo tops out at 60 bullets on the best gun, and there isn’t much relief waiting, either. 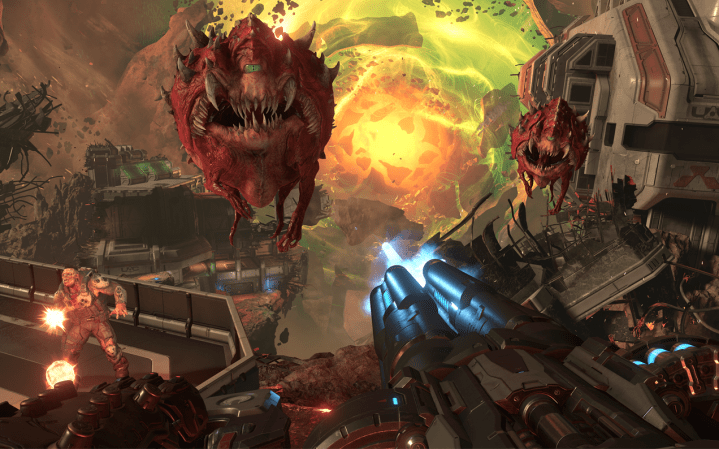 Unlike most shooters, there isn’t idle ammo drops and health refills to find along your way. Instead, you need to balance defensive shooting with the aforementioned strategic killing – sawing demons with your melee or using a high-powered glory kill will spawn ammo, health and armour drops that refill your arsenal. Unfortunately, these kills have to be earned and recharged, meaning that combat is always a frantic and high-stress mix of defensive and reflexive killing.

The later chapters introduced a variety of newer, high-powered guns like a laser rifle that destroys enemy shields and a grapple gun that launches you directly at enemies, and this made the combat situation a lot more diverse, but in the opening chapters, I was bricking it about 95% of the time. 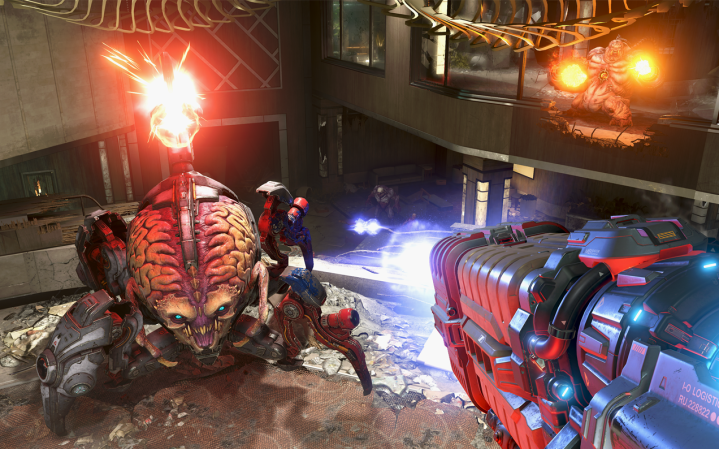 Many of the times that I died (and there were many), it was because I’d backed myself into a corner, didn’t have a glory kill, and was facing down larger enemies that couldn’t be chainsawed to death. When this happens, you can still melee enemies, but the low damage of the attack makes it feel like a toddler trying to slap the legs of a giant. In those moments, one thought was running through my head: if I really was attempting to save Earth from demons, I’d well and truly doom us all. Sorry about that, folks.

There was a particular moment in the final preview level, which took place at the bottom of a giant elevator, where I’d completely run out of moves against a duo of giant zombies with gun hands and was left to skip and jump my way to freedom. Three times, I was left with no ammo and no ways to defeat these enemies – so I made the very brave and noble choice to notch down the difficulty, just a smidge. (All the way. All the way. I was playing on easy.)

Through fire and ice 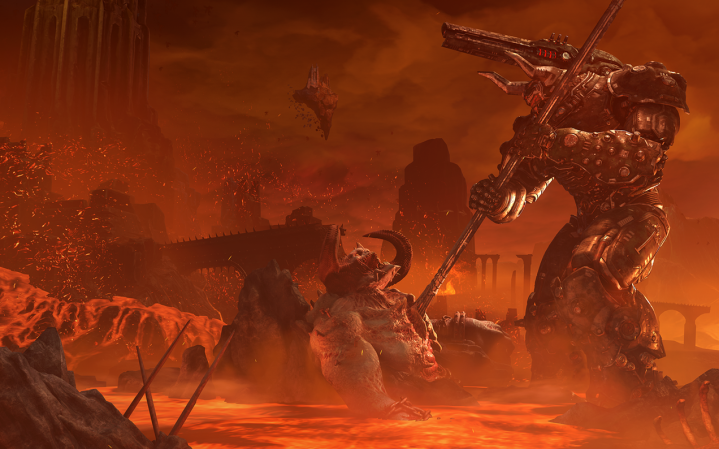 It would be very easy to assume that Doom Eternal would be all ‘doom and gloom’, but the preview showcased a variety of diverse locales, including a whole level filled with lava platforming, and another that took place in a windy ice fortress. The narrative connection between these locations was fairly unclear outside of “there’s demons out there, go get ‘em,” but it is Doom, after all. Narrative rather takes a backseat to all the guts and gore.

The opening castle level was full of goth charm, complete with mysterious statues, crumbling fortresses, spooky torture chambers and dank sewers. Corridors here are tighter, but there’s also a number of secrets and power-ups to be found in odd corners and behind hidden spaces, so exploration is a must. Here’s a tip: if an environment looks like it’s made to be broken, it definitely is. Who knew that Spyro would continue to teach me such important life lessons?

The second level, the lava level, was a bit more harrowing. Here, platforms hovered above flowing lava, and required a touch of finesse, in almost direct contrast to the balls-to-the-wall action gameplay of the opening chapter. It was a nice change of pace, but required a hectic amount of precision and timing. To cross this stark and desolate landscape, the level required delicate a balance between jumping and boosting. Boost too much, and you’d end up with a face full of spikes. Too little, you’re toast. It was fun, but it did feel strange to get caught up on precision in a franchise that’s typically known for mindless ripping, tearing and killing. 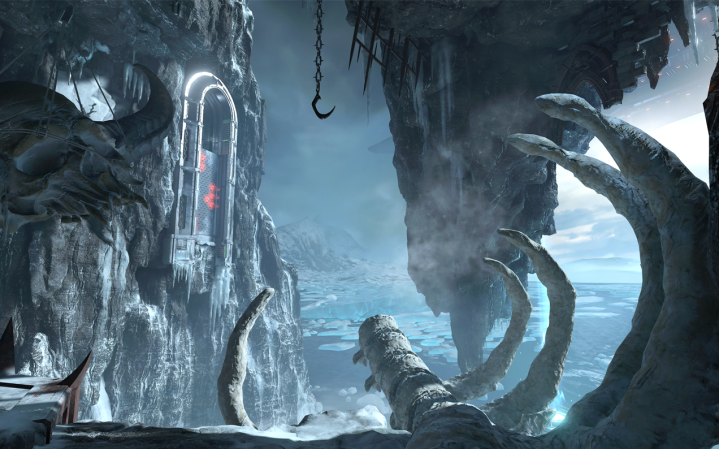 The final level featured a gothic-style ice cavern that was actually rather pretty, never mind all the flesh-eating killers wandering the wastes.

Delightfully, the preview also included a short stint where the Doom Slayer takes control of a demon revenant (known as a ‘doot’, if you’re savvy) and transfers his consciousness inside it. What follows is a full-on power fantasy sequence where you use the revenant to fly, set people on fire and take down large enemies on-masse. It’s jolly good fun, and low key made me wish the whole game could be played as such. No joy, though – the sequences is only a short one, and the revenant goes back to its cage right after. 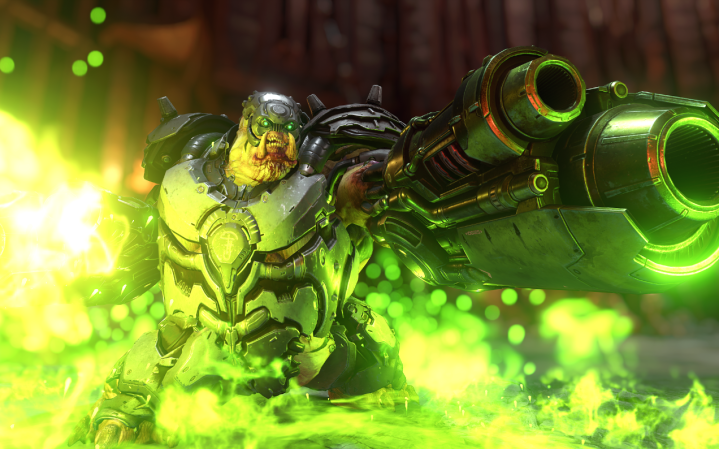 Doom Eternal was a horribly gory time, with enough blood, guts and gross-out moments to keep even the most deranged among us satisfied. While the platforming felt a little bit out of place in a game series known more for hard-hitting demon action than its finesse, it was still very enjoyable, and opened up the gorgeous-looking world a lot more than previous entries.

Combat is solid, and more than a little bit stressful, but its subtle layer of strategy makes for a far more interesting experience than a simple run-and-gun. When Doom Eternal releases on March 20, it looks set to be a bloody rippin’ good time.