ERMAHGERD: The OG Pizza Shapes Are Back & ‘Straya Is Great Again

We’ve teamed up with Shapes to announce what might be the greatest news we’ve heard all year. THE OG PIZZA SHAPES ARE BACK, PEOPLE. Find out more HERE.

Arnott’s Shapes has decided that y’all kicked up enough of a stink over their new and improved flavours to bring back one of their finest: the OG Pizza Shapes.

MISSION ACCOMPLISHED YOU LOT. WE DID IT.

The Original Pizza Shapes will be available this month, alongside other OG faves Barbecue and Crimpy Chicken, as well as Savoury (which apparently never actually endured the update). OG Barbecue and Pizza will be back in multipacks too.

Here’s what the iconic ‘Strayan company had to say about their wise decision:

“Since the launch of the New Shapes flavours, we’ve been listening to feedback. Aussies have clearly shown us the love they have for Original Pizza Shapes and we’re happy to announce the product will be returning to shelves over the coming weeks.

We’ve been humbled by Australia’s passion for Shapes and would like to thank our fans for their patience. We hope to now have the best Shapes range for Shapes-lovers old and new.”

This is phenom news for the some-28,000 of you that signed this petition to bring back the true blues / the devo fan behind this FB page. Not-so-good news for the capitalising folk selling overpriced OG Shapes on eBay.

Oh, and if you’ve somehow grown a fondness for the new flavours, they’ll still be up for grabs in Barbecue, Pizza, Cheddar, Cheese and Bacon, Nacho Cheese and Roast Chicken. To differentiate between the two, the old faithfuls will be labelled with a fat, black ‘Original Flavour‘ strip on the box, like so: 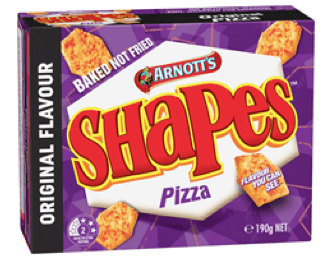 We’re yet to determine if the introduction of the new flavours in April was all part of a master plan to get us excited about Shapes again in general, or whether or not victory truly is ours.

Today our souls are a little too wet to care.