Everything You Need To Know About The Dolce & Gabbana Racism Scandal

If you haven’t already heard, Dolce & Gabbana is currently in the midst if a PR nightmare, with all fingers pointed at the Italian brand’s namesake co-founder, Stefano Gabbana.

From shows being cancelled, to the designers being pulled from leading retailers, here’s a crash-course guide to everything you need to know about the D&G scandal.

It all started when D&G was accused of racism in this incredibly questionable (and now deleted) three-part campaign promoting their upcoming Shanghai show.

The clips, titled ‘Eating With Chopsticks’, shows an Asian model struggling to eat cannoli, pizza and spaghetti with chopsticks:

#DGlovesChina ? More like #DGdesperateforthatChineseRMB lol.  In a bid to further appeal to luxury's covetable Chinese consumers, @dolcegabbana released some hella offensive “instructional” videos on the usage of chopsticks.  Pandering at it's finest, but taken up a notch by painting their target demographic as a tired and false stereotype of a people lacking refinement/culture to understand how to eat foreign foods and an over-the-top embellishment of cliché ambient music, comical pronunciations of foreign names/words, and Chinese subtitles (English added by us), which begs the question—who is this video actually for?  It attempts to target China, but instead mocks them with a parodied vision of what modern China is not…a gag for amusement. Dolce & Gabbana have already removed the videos from their Chinese social media channels, but not Instagram.  Stefano Gabbana has been on a much-needed social media cleanse (up until November 2nd), so maybe he kept himself busy by meddling with the marketing department for this series. Who wants to bet the XL cannoli “size” innuendos were his idea? Lmao. • #dolceandgabbana #altamoda #rtw #dgmillennials #stefanogabbana #shanghai #chinese #italian #cannoli #meme #wtf #dumb #lame #chopsticks #foodie #tutorial #cuisine #italianfood #asianmodel #asian #chinesefood #dietprada

The campaign copped a load of flack from Chinese online platform Weibo for perpetuating harmful stereotypes, leading to its subsequent removal.

Following the backlash, it’s reported Stefano then engaged in a slew of racist slurs over Instagram, directed at critics of the campaign.

As @dolcegabbana prepares to mount their next runway show in Shanghai this coming evening (7:30PM) and the rest of Instagram fawns over what’s sure to be an overly lavish “love letter” to China, we’ll be wondering if we’ll see chopsticks as hair ornaments, take-out boxes as purses, or even kimonos misappropriated as Chinese costume. Time will tell. For now, we’ll let y’all simmer on this DM between Stefano and Dieter @michaelatranova (chronology is reversed in slides). Word has it that they’re still in the process of model casting (over 200 Asian girls scheduled)…wouldn’t let them walk the show if we were their agents lol. Also, curious what the Chinese government will think of their country being called shit basically…especially considering how strict they are on who to allow to enter the country on work visas based on a thorough social media background checks. • #DGTheGreatShow #DGlovesChina #runway #fashionshow #cancelled #racism #dolceandgabbana #altamoda #rtw #dgmillennials #stefanogabbana #shanghai #chinese #china #wtf #dumb #lame #asianmodel #asian #dietprada 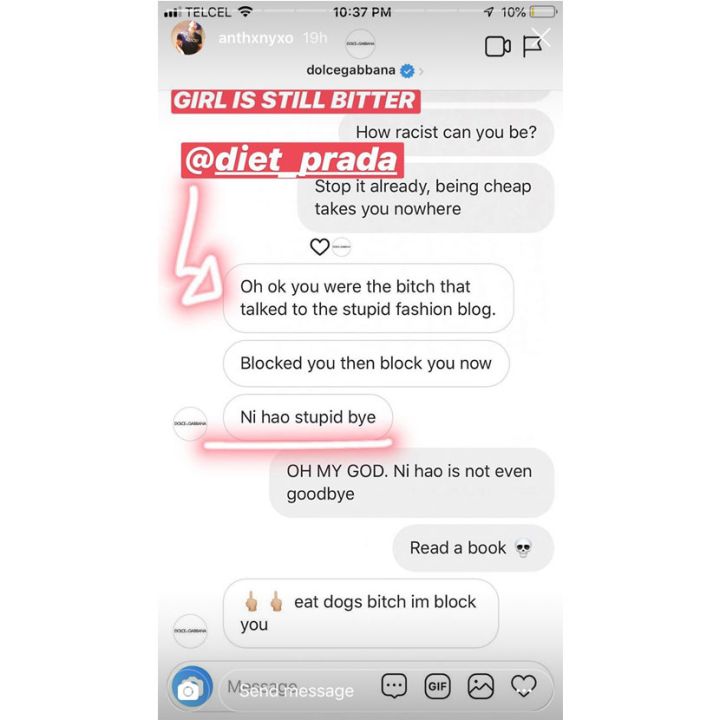 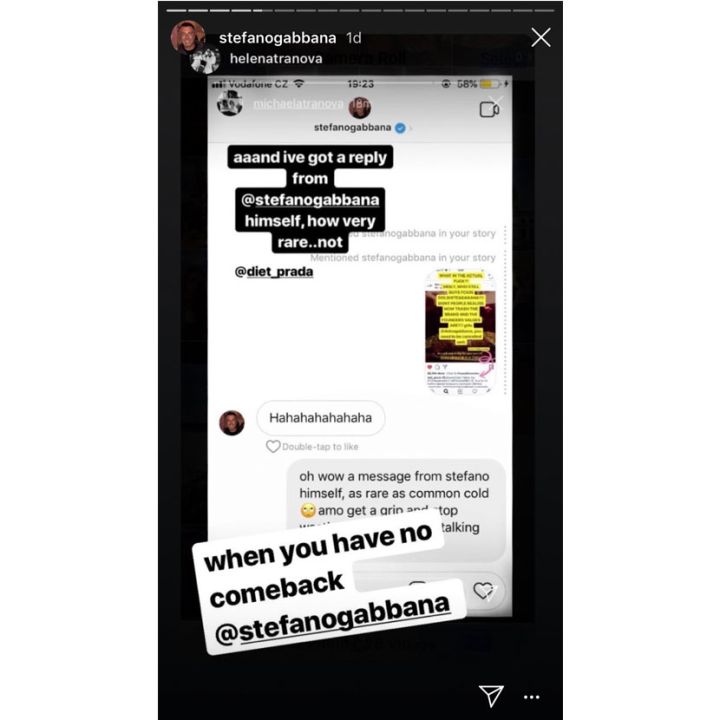 Following the heated turn of events on Instagram, Dolce & Gabbana went straight into damage control, by claiming both the brand and Stefano’s Instagram account had been hacked.

“Our Instagram has been hacked. So as the account of Stefano Gabbana,” the label posted on their grid.

“Our legal office is urgently investigating. We are very sorry for any distress caused by these unauthorized posts. We have nothing but respect for China and the people of China.”

Our Instagram account has been hacked. So has the account of Stefano Gabbana. Our legal office is urgently investigating. We are very sorry for any distress caused by these unauthorized posts, comments and direct messages. We have nothing but respect for China and the people of China. Dolce & Gabbana 的官方Intragram 账号和 Stefano Gabbana 的 Instagram 账号被盗，我们已经立即通过法律途径解决。我们为这些不实言论给中国和中国人民造成的影响和伤害道歉。我们对中国和中国文化始终一贯的热爱与尊重。

“My Instagram account has been hacked. My legal office is working on this. I love Chine and the Chinese Culture. I’m so sorry for what happened.” 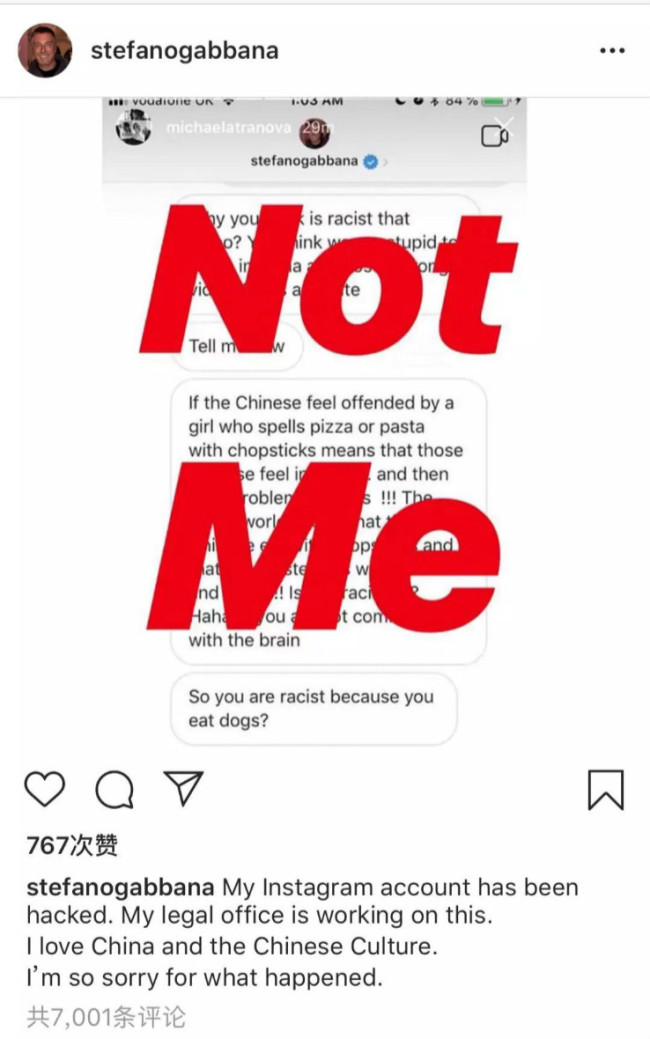 @DietPrada then started sharing pictures of 200 workers abandoning the Shanghai show, with reports D&G will “relaunch” the brand without Stefano: 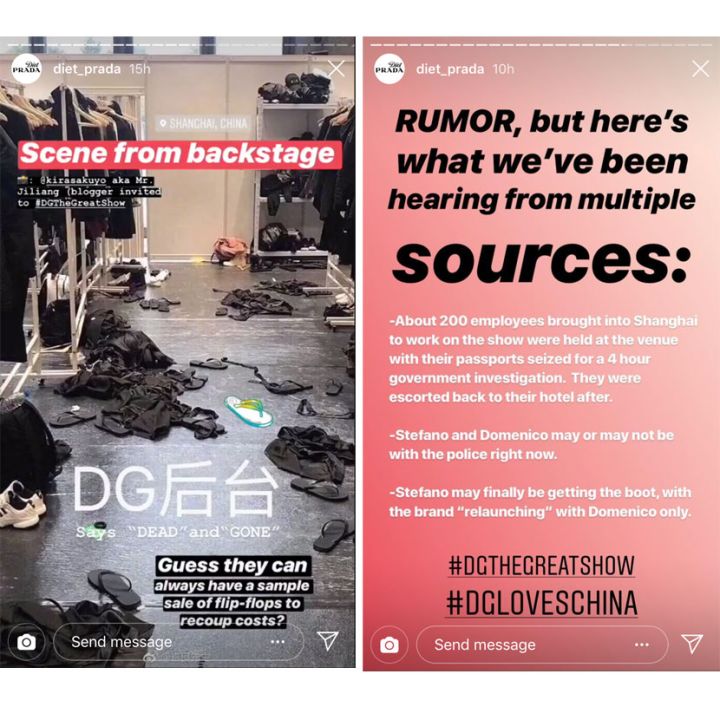 Shortly after, news broke that ‘The Great Show’ was been officially cancelled by the Cultural Affairs Bureau of Shanghai:

You saw it here first! What an interesting few hours spent wreaking havoc on @dolcegabbana ’s ill-fated #DGTheGreatShow while sitting on our couch juuling and eating gelato (not with chopsticks) lol. Thank you to @michaelatranova @helenatranova @anthxnyxo for sharing their DMs and to all the Chinese Dieters who furiously updated us with translations by the minute. For anyone that believes their account was actually hacked, see slide #2 of Stefano reposting the same DM on his stories before shit hit the fan. Oh the irony of him loving to cry “fake news” and promptly dishing it out himself via his and the brand IG account. Check our story highlight “#DGTheShitShow” for the full recap. • #DGTheGreatShow #DGlovesChina #runway #fashionshow #cancelled #racism #dolceandgabbana #altamoda #rtw #dgmillennials #stefanogabbana #shanghai #chinese #china #wtf #dumb #lame #asianmodel #asian #dietprada

Stefano and his business partner, Domenico Dolce, have since issued a public apology, asking for forgiveness:

The brand also issued a second apology statement on its feed, which reads:

“Our dream was to bring to Shanghai a tribute event dedicated to China which tells our history and vision. It was not simply a fashion show, but something that we created especially with love and passion for China and all the people around the world who loves Dolce & Gabbana.”

After the brand’s reputation was dragged through the shitter, now online retailing monolith the Yoox Net-A-Porter Group just announced they’re dropping Dolce & Gabbana from all it’s Chinese platforms. The Yoox Net-A-Porter ground follows in the footsteps of a tonne of other e-retailers such as Alibaba, JD, Secoo, VIPshop and Netease.

In the aftermath, WWD reports that a number of social media platforms, especially those based in China, have been swarmed with footage of people burning and shredding their D&G clothes.

More news as it comes.