It’s awards season and we all know what that means — beautiful celebrities get all tizzed up to hit the red carpet to promote movies no one bothered to see because we were all too busy watching Spider-Man: No Way Home three times!

Today’s ceremony was the good old BAFTAs (basically the British Oscars) where all our faves across the pond wore an assortment of good, bad and batshit outfits. Usually I wouldn’t care much about the BAFTAs red carpet, but there are some fits in here that are TOO nuts not to share.

So let us dive in to the 2022 BAFTAs red carpet and all the glitz and glam I could rustle up from our Getty subscription:

How did we know that multi-talented queen and House of Gucci star Lady Gaga would absolutely own the BAFTAs red carpet? I’m obsessed with this entire look because there’s nothing I love more than vintage Hollywood glam with cheeky nods of edginess (her tattoos, those fucking outrageous boots). I also adore the flex of just holding up your cute little handbag so no one can miss it.

This outfit looks like what would happen if the Gryffindor bimbos gave precious Hermione a makeover. I hate it. Emma Watson is such a natural and classic stunner usually and doesn’t even need to try to look chic. I don’t know what she’s going for here? As my colleague Matty said: “she looks like she’s auditioning for Byron Baes“.

These two hit the BAFTAs because they are promoting a movie called Fresh (the trailer for it is bloody wild, by the by). I absolutely love Daisy Edgar-Jones‘ disco-vibey frock — teamed with her very excellent curtain bangs she def looks like she’s at the 1978 BAFTAs red carpet which is the highest compliment I could give, really. Her handbag is also gorgeous. I love his new haircut.

Meanwhile for old millennials like me, you can’t have a BAFTAs red carpet wrap without including Sienna Miller — she was THE style icon of the noughties. I love this pic because it has the vibes of her trying on five outfits at home, landing on the cream silk dress and then realising with growing horror “fuck, I forgot to take off the gloves”.

THIS COAT. Daniel Kaluuya can do no wrong, seriously.

A Quiet Place star Millicent Simmonds has done my fave thing of taking a theme and running with it. She seems to have decided that her theme for the BAFTAs red carpet is “dress like a postcard from a quaint English village” and girl has nailed the brief, just quietly.

Good old Rebs kinda looks like she has no idea why she was invited to the BAFTAs red carpet. But I do love her dramatic tiered frock. A classic award show flex: being a random guest but dressing like you’re the bloody main attraction.

Sex Education and soon-to-be Bridgerton star Simone Ashley is giving the most serious “thanks, it has pockets!” performance we’ve ever seen in our lives.

Aussie-born gal Shalom Brune-Franklin is in my favourite show Line of Duty as well as Stan’s The Tourist, which also ruled. I absolutely froth her entire look, but the mum in me wants to tell her to put her shoulders back and STOP BLOODY SLOUCHING. It’s the BAFTAs red carpet, own it!

Sorry Sienna doll, but Bimini is absolutely bringing the lace glove A-game to the BAFTAs red carpet. Not a joke, just a fact.

More gloves! Apparently this is Millie Bobby Brown‘s red carpet debut with her boyf Jake Bongiovi and doesn’t it show? Whenever you get a first cute couple pic you always both just end up looking fucking awkward. Stoked, but awkward.

Promising Young Woman writer-director Emerald Fennell looks perfectly fabulous in this velvet flared suit. But check out the back! I love a fun reveal!

Tom Hiddleston (and woman who is not me)

Begrudgingly I have included this pic of my husband Tom Hiddleston with his very gorgeous girlfriend Zawe Ashton in my round-up. Mainly because I wanted an excuse to look at a hi-res image of Tom Hiddleston. But I will admit that Zawe looks very good. Her dress is such a perfect candy pink and annoyingly she looks amazing in it, which is unfair because I would look like an actual beanbag in it.

HAIM sis Alana Haim is also giving “I have no idea why I’m here”. I do love this shade of green, so I for one am glad she rocked up.

Admittedly when I was looking for photos I had no idea who Emilia Jones was. I thought maybe they’d mislabelled a pic of Felicity Jones who is also a white woman with dark hair and a fringe. I was wrong! This woman is in the movie CODA which is apparently amazing! As is this dress! Honestly, if you’re 20 years old then it’s a crime not to wear a skin-tight, leg-baring metallic showstopper like this to the BAFTAs red carpet.

I’ve actually been wondering what had happened to Star Wars star Daisy Ridley. Apparently she was just lost behind this dress for two years.

Only our zany fave Florence Pugh could get away with wearing the love child of a serious business blazer and a table trimming from a 1980s wedding to the BAFTAs red carpet.

Look at this thing: 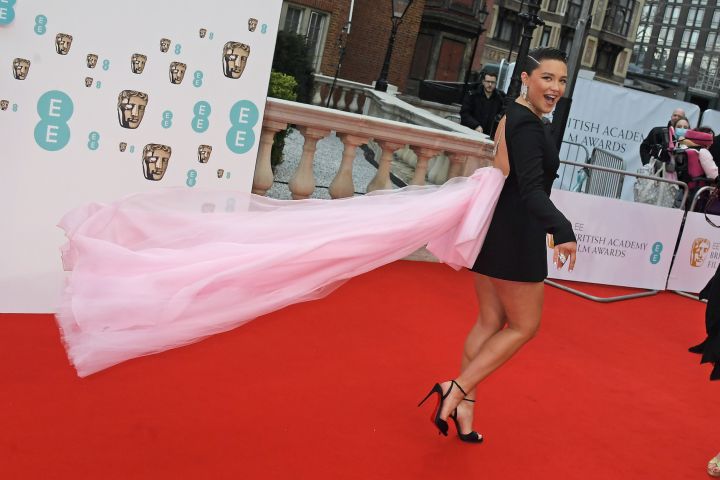 It looks like some kind of high fashion gender reveal. I can’t be mad though, everything she does is amazing.

Whenever I see Benedict Cumberbatch I kinda cringe because I used to want to bone the lizard man so bad. On that note… is it 2014 or am I ovulating because not gonna lie, I would definitely still go there.