Just one day before he marches into court to begin formal proceedings in his unlawful sacking suit against Rugby Australia, Israel Folau has apparently subbed himself off the internet by sending his social media accounts to the bin.

Folau will front a directions hearing tomorrow in Melbourne’s Federal Circuit Court, where he is seeking $10 million in damages from Rugby Australia as well as the reinstatement of his contract that was torn up amid a storm of controversy stemming from a ferociously homophobic Instagram post Folau made on April 10th.

Despite the tearing up of his RA contract, over what RA officials deemed a severe breach of its code of conduct, Folau left the offending post up on his Instagram page until early this afternoon, when the entire account disappeared from the internet.

The disgraced now ex-rugby star’s Facebook page remains active for the time being, although that one has not been updated since March of this year, well before the homophobic post was made on Instagram. 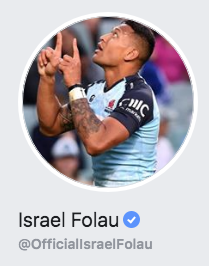 Folau’s Instagram post at the centre of all this mess paraphrased a Bible verse and explicitly claimed that all gay people are condemned to hell.

A GoFundMe page set up to raise money for Folau’s legal costs was subsequently deleted for breaching the website’s terms of service.

Neither Folau, nor representatives for the 30-year-old, have issued public statement on the removal of his social media accounts this afternoon.

Read into all of this what you will.