There are two big questions following Israel Folau and Rugby Australia finally reaching a settlement yesterday: how much was the former Wallaby star paid, and when can we stop talking about him?

The answer to the latter is: unfortunately, probably never.

And that’s because the answer to the former is: millions and millions of dollars.

The Daily Telegraph is reporting that Folau walked away with $8 million from RA after a drawn-out legal battle, while The Australian reports “several million dollars”.

RA CEO Raelene Castle said Folau settlement numbers “are wildly inaccurate”, but as Folau was reported to reject a $1 million offer in May, there’s an easy assumption to make that it’s “shitloads higher”.

The payout, of course, was because Folau made a social media post denigrating “homosexuals, adulterers, fornicators and drunkards”, a direct breach of his four year, $5.7 million contract as well as being blatantly homophobic.

Following a $14 million legal battle, Folau managed to extract an apology from Rugby Australia yesterday, which said it “acknowledges and apologises for any hurt or harm caused to the Folaus”.

In a joint statement, Folau and RA claimed the post “reflected Mr Folau’s genuinely held religious beliefs” and that he “did not intend to harm or offend any person when he uploaded” the post.

“Mr Folau wants all Australians to know that he does not condone discrimination of any kind against any person on the grounds of their sexuality and that he shares Rugby Australia’s commitment to inclusiveness and diversity,” the statement read.

You uh…. sure about that? 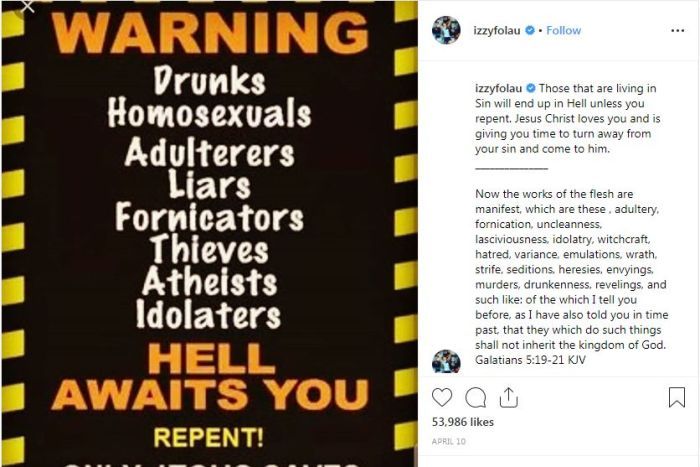 It’s already being chalked up as a win for supporters of a controversial freedom religious bill, which has been intrinsically linked to the Folau case.

Attorney General Christian Porter said it would provide “an extra protection to people subject to an employer rule” in circumstances such as Folau’s, meaning RA would have been forced to prove financial hardship due to Folau’s post, rather than bring forth consequences for simply being homophobic.

Folau himself as now urged the government to pass the bill. Meanwhile.

As for people who donated $2.2 million to Folau to help his legal battle, they’ll be getting their money back, according to the managing director of the Australian Christian Lobby, Martyn Iles.

Donors who gave to the Folau campaign will be contacted in due course and are entitled to refunds on a pro-rata basis, in accordance with our original commitment.

Thank you all for contributing to an important result for religious freedom.