7News has come under fire on social media after uploading a since-deleted Facebook post about English football that specified the race of the losing players.

The post in question was about the recent Euro football game where English players lost to Italy. The result of the game has culminated in a torrent of racial abuse against ethnic players in the team because they didn’t score in the final shootout, which 7News was reporting on. Their headline read: ‘‘Abhorrent abuse’: England players cop racist taunts after shootout’.

The post was accompanied with the Facebook caption: “Three Black players failed in the penalty shootout”, and people are not happy about it for obvious reasons.

While I can see what 7News was trying to do – it looks to me that this was an attempt at explaining what triggered the racial abuse players were facing – this is definitely *not* it.

Channel 7, was it strictly necessary to point out that these elite athletes who represented #England are black? Also, could you please let me know, are now going to refer to the players with less melanin as "white" players? #Straya pic.twitter.com/GpVmYad3SY

For starters, the wording makes it easy for the caption to be interpreted as linking the race of players to their performance in the game… which is exactly the fucking opposite of what they should be doing considering racism is the story here.

Naming the race of players in the caption without the necessary context makes it seem like a validation of the racist abuse, rather than context for it.

See how that still mentions the ethnicity of the players, but rather than stoking racists, it just provides context to the news report?

After copping a *lot* of abuse in the comments, the post caption was edited to remove the race of the players. 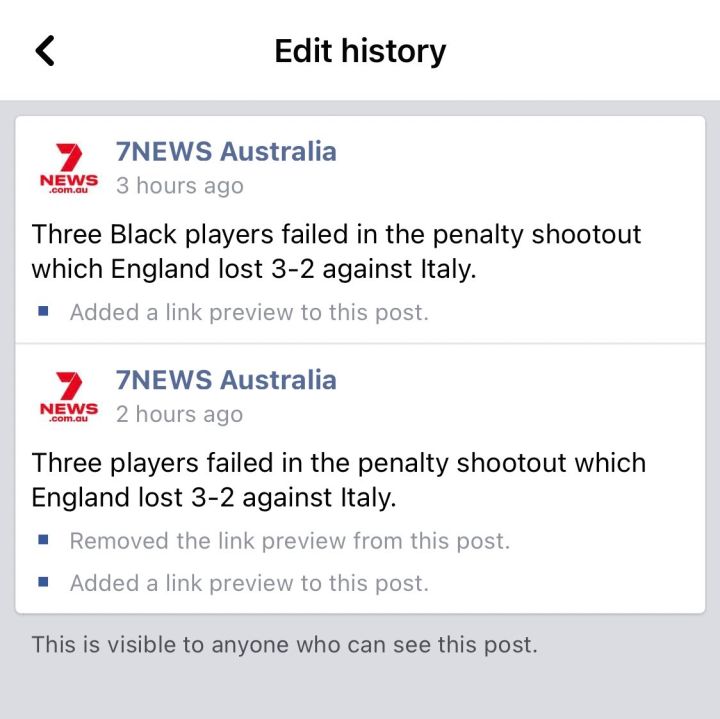 But that didn’t stop the backlash, and the post has now been deleted. Which just means people have resulted to spamming other posts on 7News’ Facebook page demanding accountability for the caption.

One person commented on an article about a family who lost loved ones in a fire, saying: “Not gonna let us know what race they were? I thought y’all did that now.”

“Was he white or black 7news ??? Need to add that important info,” someone commented on a different post about another story.

“What colour was his skin? Isn’t that the most important detail according to you guys?” another person added.

7News has since apologised for the caption, calling it a “regrettable mistake.”

“Earlier on Monday, a 7NEWS.com.au social media post was published with a regrettable mistake,” their statement read.

“The post linked to an article condemning the racial abuse of England football players following the team’s loss to Italy in Sunday’s Euro 2020 final.

“The caption on the post was swiftly rectified as soon as it was identified.

“We sincerely apologise for the offence the post caused.”

But hey, look at the bright side: at least they capitalised the ‘B’ in Black. That’s more than I would typically expect for a publication that was found to have breached the Commercial Television Industry Code of Practice for false coverage of supposed ‘African Gangs.’

I mean, they did put a capital B for ‘Black’ – that’s actually huge leap forward for Channel 7. https://t.co/ljq3pW1MZM