If you go to the same café most days, there’s a high chance you have a low-key crush on another regular.

You know the one.

Maybe they’re the guy who gives you a knowing smile when you’re both stuck in line. Perhaps they’re the girl who, despite her obnoxious habit of ordering a soy decaf caramel latte with a side of almond milk, remains attractive. Never mind the cake display; the barista could be the real snack you’re hungry for.

Will you ever go out on a limb and ask them out on a date?

Probably not. The situation is too high-stakes. If they decline your offer for whatever reason, be it a partner or a lack of interest, your ego will take a hit and you’ll probably have to find a new local. Tragic.

Thankfully, Tinder‘s latest feature makes connecting with people around you a whole lot easier… and Sydney users are some of the first in the world to experience it.

Launched exclusively in Sydney, Brisbane and Santiago today, Places is a location-tracking feature that allows users (who opt-in) to see potential matches who enjoy the same places they do.

How does it work, exactly?

Go into your app and flick the new switch at the top of your home screen. This will turn on location tracking. 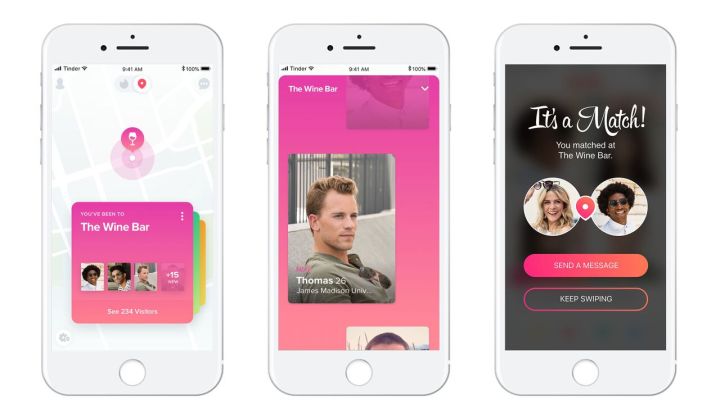 Now, go about your day as you usually would; hit up your local for brunch, sweat it out at spin class and have a martini at your favourite hole in the wall.

Thirty minutes after you’ve left these locations, a notification will pop up alerting you to the fact you’ve accrued a new spot, and you can decide whether or not you want to explore potential matches who’ve also been there.

We know what you’re thinking. Isn’t this gonna throw up major concerns around privacy?

We sat down with Tinder’s Director of Location Products, Samantha Stevens, to get the low down on the nitty gritty details of the feature and why it’s safe to use.

“There are three main safeguards we’ve put in place,” explains Stevens. “Number one, it’s not real time. So no one will be able to see where you are right in the moment. Your places only appear 30 minutes after you’ve left.”

“The second is that it’s only social places. It won’t show where you live or work; no residential or office spaces are included on the feature. We use foursquare as the database for Places. They have millions of verified places around the world that your phone can detect via our app. There’s no need to ‘check in’ anywhere.”

Stevens also explained that if you’d rather keep potential mates from knowing you frequent George St Maccas, you can choose to delete or block the location permanently, likea so: 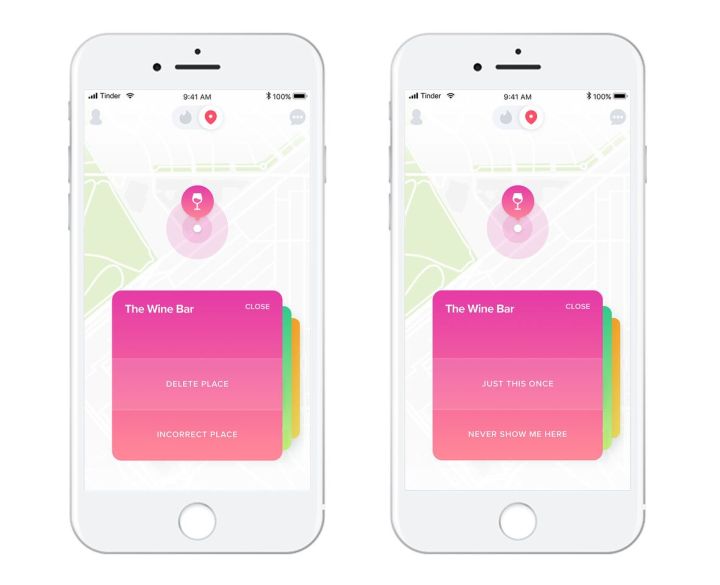 “The places where you go are a reflection of who you are. It’s an authentic way to meet people. In the world of dating apps, it can be easy to say one thing and do another, but actions speak louder than words, so the fact that you can only chat with people who have done the same thing as you adds a level of authenticity.

Stevens explained that the Places feature has been in the works for a year now, with beta users responding favourably to the new update.

“We started the trial six weeks ago, and 80 per cent of users have continued using it. From feedback and surveys, we’ve added some more safeguards to make sure we’re making people feel comfortable. It’s a female-lead design; I worked with our Product Designer Brooke Hollabaugh to create the feature.”

And what are the most popular spots people have been finding potential connections at?

“We’re seeing a lot of activity at bars and restaurants. They’re the most popular categories. Places like shopping centres, where a lot of people go, are also popular. In Sydney we’ve seen a lot of outdoorsy areas like beaches and parks proving popular.”

The best bit? We get it before America (score). So what are you waiting for? You can give it a burl now.

You never know; that cute barista might be single and ready to Tindle right bloody now.