Who The Hell Is ‘Bean Dad’ And Why Is Everybody On Twitter Making Memes About Him?

When I woke up this morning, I truly did not expect to see ‘Bean Dad’ trending all across the interwebs. But alas, here we are, on the fourth day of 2021, and everyone is talking about this mysterious man.

Naturally, I assumed that ‘Bean Dad’ was something fun and enjoyable to read up on in the morning. You know, some guy who just really loves beans, and is a dad. The image that these two words put together evokes is one of joy. However, the real reason that ‘Bean Dad’ is trending is because of a super fucked up story shared to Twitter. Love that.

The Bean Dad discourse started up when John Roderick, an American singer for the band The Long Winters, posted an incredibly long thread detailing the fact that when his nine-year-old daughter was hungry, he made her cook her own beans, and waited over six hours (SIX!!) for her to frustratingly try to open the can with a can-opener.

Roderick has since deleted his Twitter page, but thanks to a few savvy souls, we have the whole thing in screenshots. 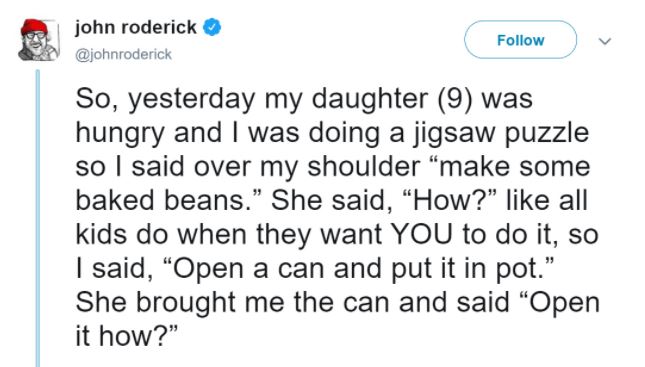 It’s a long read, so here’s a quick recap for you, because nobody has that much time.

Essentially, Roderick’s nine-year-old daughter wanted to eat, and so Roderick suggested beans. His daughter, not knowing how to open the can, was then forced to open it herself over the course of six hours.

Roderick makes quips throughout his daughter’s struggle such as, “the tool is made to be pleasing but it doesn’t have any superfluous qualities. Everything that moves does so for a reason,” and naturally, his daughter is not pleased, and quite hungry.

In his Twitter thread, he also writes douchey things like “I wanted her to experience the magnificence of the can opener SO MUCH I couldn’t stand the suspense,” which is something.

But hey, here is a dramatic reading if you want to know what happened without digging into the finer details.

A dramatic reading of the Bean Dad thread pic.twitter.com/L4hNGO0iPL

So yeah, as you might be able to gather, there was more than one tool in this story. Roderick essentially left his daughter without food for six hours just to prove a point about opening a can, and the internet was having absolutely none of it.

Firstly, some people online started calling out Bean Dad’s parenting, saying that his behaviour in the story is pretty abusive and disgusting. Others, however, decided to meme the hell out of the situation, resulting in over 100k tweets that discuss the hilarity and stupidity of the Bean Dad story.

Here are some of the best memes about the entire saga, because damn is it one of the most random occurrences that could have possibly kicked off 2021.

In case you missed the bean dad thread here it is pic.twitter.com/rQNg1GGBR8

Making my four year old son explain to me exactly how insulin works before I give it to him. We’ve been at this for eight hours and he’s fading fast.

Thanks for sending. I am not reading all of that (Bean Dad). However, it looks like nonsense.

the only bean dad i wanna read about pic.twitter.com/JUsUkiBUcM

the bean dad has had enough of your shit pic.twitter.com/YKkdzcmfi8

Day 12 of Covid and I am so tired it's almost too hard to type this. I keep falling asleep and every time I wake up, the bean dad discourse has somehow evolved to a different stage

bean dad when his daughter asks for food because she’s hungry: pic.twitter.com/9CvLc5JEiC

Bean Dad not understanding why Twitter is upset with his shit parenting pic.twitter.com/oiduhZ2TLO

my thoughts on “bean dad” pic.twitter.com/h1jAO4ze1n

Then, as the discourse evolved, people uncovered some pretty gross tweets from Roderick’s past, which involved racism, sexism, homophobia and a whole smorgasbord of other disgusting stuff.

With this came the memes that joked about how the situation started off as a can of beans, and ended up being a can of worms.

Can we just like stop with the jokes about bean dad not being able to take the heat? Look at these tweets. He was a terrible fucking dude. He deleted out of cowardice and as a way to escape responsibility of these terrible tweets. There’s nothing funny about it. pic.twitter.com/pJngp1mzFN

Anyways fuck it here's a meme on Bean Dad today, I guess pic.twitter.com/aPGoA5esjq

Naturally, people who worked with Roderick started to pull away from him after these old tweets resurfaced.

Podcast My Brother, My Brother and Me, which used a song from The Long Winters as its theme, decided to pull the band’s music from their show. Following this, Bean Dad deleted his Twitter page completely.

For reasons we’re sure you’re all aware of, we’re getting started finding new music for MBMBaM. You’ll probably hear a filler theme song on this week’s episode. We’re not sure what’ll come after that, honestly, but we hope you’ll stick around to find out.

Then, Ken Jennings, the new host of Jeopardy! who also shares a podcast with Roderick, came out in defence of him, refusing to acknowledge his history of racist tweets.

Extremely jealous and annoyed that my podcast co-host is going to be a dictionary entry and I never will.

And of course, the lovely people on Twitter found that he too had some pretty problematic tweets in the vault. Big yikes.

Since can opener/bean dad was successfully called out, and we see a lot of people confused why Ken Jennings would work with him, we want to remind y'all Ken Jennings is ableist. Bigots attract bigots. pic.twitter.com/K8bAPou4oj

me: bean dad’s antics may stop ken jennings from being the jeopardy host

my sister: mason said his first word and we just put an offer on the house!

Since then there haven’t been too many updates, apart from a plethora of ridiculous memes making fun of how out of control this story became.

So yeah, that’s that! I think it’s time for me to go lay down. Bean Dad discourse has drained the life from my very core.