Working from home has really upped my breakfast game. No longer do I shovel down some peanut butter on toast (no butter, you monsters) as I rush out the door. Now it’s scrambled eggs, and sometimes bacon, and also baked beans. Not together, gross. But baked beans are being revisited.

I was one of those kids who had a small can of baked beans in their lunch box as a kid, before schools started banning them because, you know, the lid is really sharp and probably not a great playground addition with tiny hands everywhere.

This is likely where my understanding as to how you’re meant to eat baked beans came from. They were cold in the can, so I just… ate them outta there. Cold.

I knew you could put baked beans in a jaffle and they would be yummy, it’s not like I couldn’t fathom the concept of warm beanies. But when I eat them, I either go straight out of the can with a spoon, or I put them on toast. Cold.

I never heat them up. I don’t microwave them in a bowl, or warm them on the stove. That seems really insane to me and the kind of over-thought, chaotic energy of people who feel the need to reheat day-old pizza or whatever.

But the wild part is, I didn’t even REALISE people heated them up. I thought we were all out here, just eating our baked beans cold from the can. Putting cold beans on our toast. Sometimes making them into a jaffle.

Not fucking pulling out a saucepan and heating them on the stove.

I did a very low-grade investigation into this, because originally I was going to frame this article as “YOU DON’T HEAT UP BAKED BEANS HAHAHAHA YOU PSYCHOPATHS”. But then when I did an office poll on our chat app, EIGHTEEN people said they heat their baked beans up, versus just two who eat them cold.

One of those two weirdos was me.

Eventually, that number made it to five “cold beans” versus TWENTY-FOUR “hot beans” lovers. But still, it proved that I was in the minority here and if I’d yelled at you all about your hot beans, you’d probably go find where I live and start throwing cans of cold beans at my windows or something.

So I heated up some beans. Hey – may as well give it a go. I am not a baked beans purist but at the moment I’ve got some Heinz Beanz around. I have to say, their “can for one” offering is the perfect size, like not tiny but not overly beany you know? That’s just an aside from me.

Anyway you know what? NO. NOT TO HOT BEANS.

Heated up baked beans lose all the sugary deliciousness from the tomato sauce. It’s like it raises the acidic tomato flavour so it outshines the sweetness. And I need that sweetness? Otherwise I’d just eat some plain beans or something?

I don’t know, guys. The packet even SAYS to heat it up. They don’t give you the option of eating them cold as a serving suggestion! 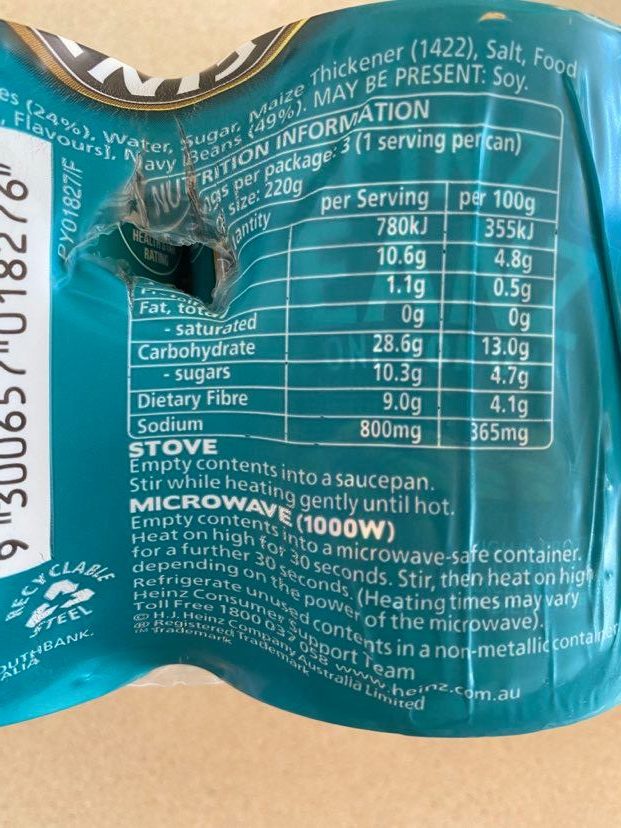 So I’m clearly wrong here based both on what Heinz says and on what everyone else in the goddamn world thinks, but I refuse to back down because I have things a go your way and it wasn’t GOOD.

Cold baked beans forever. And yes before the haters comment, this is a story and yes I got paid to write it and yes I went to Uni for this and I fucking love my job, so maybe go do a fart to let your toxic neg energy out.